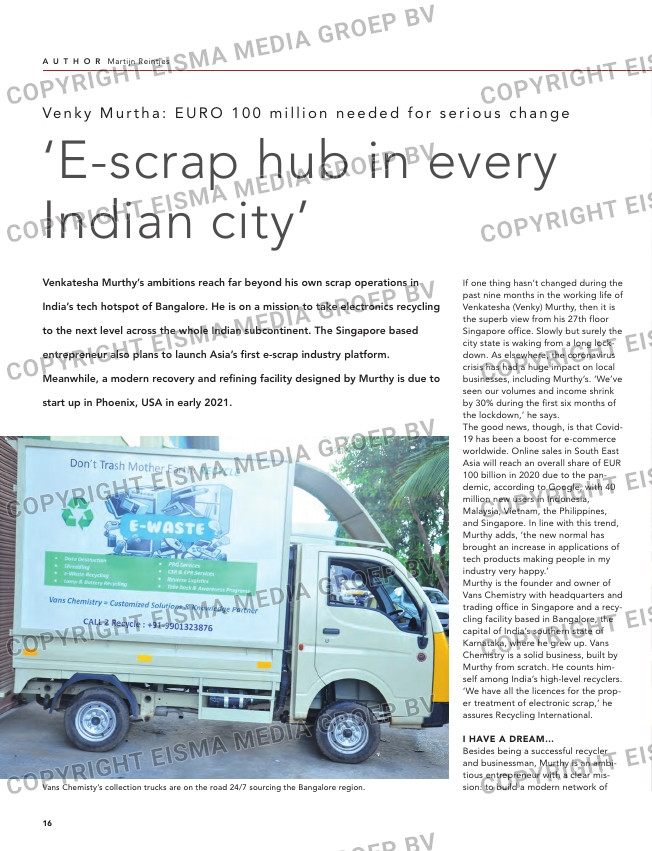 ‘E-scrap hub in every
Indian city’

India’s tech hotspot of Bangalore. He is on a mission to take electronics recycling

to the next level across the whole Indian subcontinent. The Singapore based

Meanwhile, a modern recovery and refining facility designed by Murthy is due to

If one thing hasn’t changed during the
past nine months in the working life of
Venkatesha (Venky) Murthy, then it is
the superb view from his 27th floor
Singapore office. Slowly but surely the
city state is waking from a long lock-
down. As elsewhere, the coronavirus
crisis has had a huge impact on local
businesses, including Murthy’s. ‘We’ve
seen our volumes and income shrink
by 30% during the first six months of
the lockdown,’ he says.
The good news, though, is that Covid-
19 has been a boost for e-commerce
worldwide. Online sales in South East
Asia will reach an overall share of EUR
100 billion in 2020 due to the pan-
demic, according to Google, with 40
million new users in Indonesia,
Malaysia, Vietnam, the Philippines,
and Singapore. In line with this trend,
Murthy adds, ‘the new normal has
brought an increase in applications of
tech products making people in my
industry very happy.’
Murthy is the founder and owner of
Vans Chemistry with headquarters and
trading office in Singapore and a recy-
cling facility based in Bangalore, the
capital of India’s southern state of
Karnataka, where he grew up. Vans
Chemistry is a solid business, built by
Murthy from scratch. He counts him-
self among India’s high-level recyclers.
‘We have all the licences for the prop-
er treatment of electronic scrap,’ he
assures Recycling International.

I HAVE A DREAM…
Besides being a successful recycler
and businessman, Murthy is an ambi-
tious entrepreneur with a clear mis-
sion: to build a modern network of

Venkatesha Murthy: ‘Ultimately,
you would need 100-plus facilities
to build a serious capacity.’

Vans Chemisty’s collection trucks are on the road 24/7 sourcing the Bangalore region.