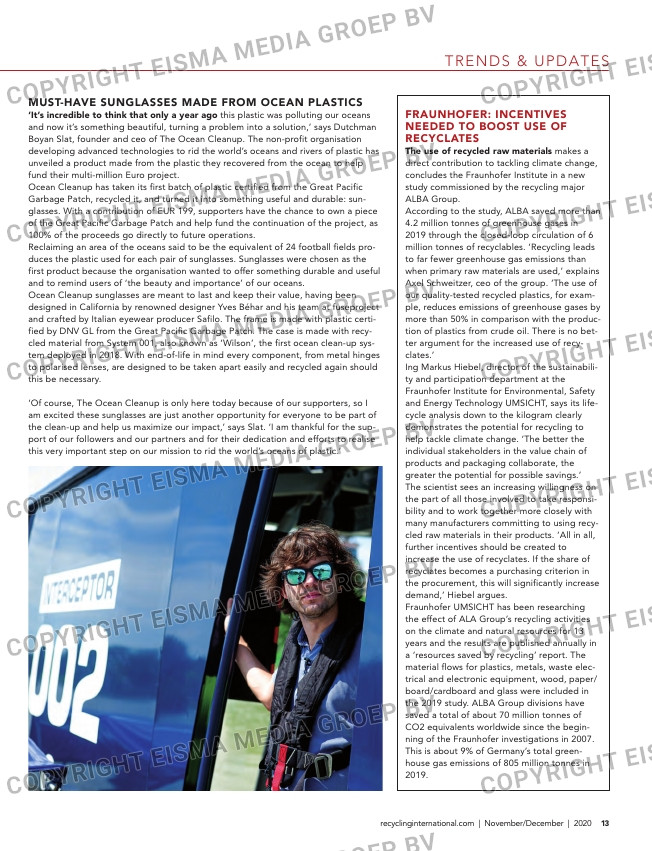 high hoPeS For aFrican Phone battery
Programme
Phone recycler closing the loop of the Netherlands has developed a pilot
programme to ship more than five tonnes of mobile phone batteries from
Nigeria to Belgium and recycle them into new products.
With the ‘first-ever shipment’ of scrap Li-ion batteries from West Africa to
Europe, CTL hopes to prove that these scrap batteries can be a sustainable
source for resources.
The initiative is claimed to likely become a game-changer for the electronics
industry, and the project could well be a model for mobile phone battery
recycling in other African countries, the company says in a new white paper.
The paper, ‘Making a Business Case for African Battery Recycling’, describes
the steps the company took to safely collect, store, and ship the phones
containing an estimated 1.2 tonnes of cobalt. The recycled materials will be
sold onto the market to be used in new batteries, the report says.
Closing the Loop worked with local governments, environmental service
company Verde Impacto, Nigerian recycler Hinckley Group, cell phone com-
pany Fairphone and US battery recycler Call2Recycle.
Closing the Loop already collects end-of-life phones in developing countries
and ships them to countries with a proper infrastructure for recycling but
says the potential hazards of lithium-ion batteries prevented it from includ-
ing batteries in its recycling plans until the pilot programme started in 2018.
Although the project demonstrated that such work is possible, the required
administration and documentation to ship used li-ion batteries is costly and
complicated. The report notes that agreements such as the Basel
Convention, ‘though passed with good intentions, in this case obstruct
improvements in the recycling of electronic waste from countries like
Nigeria’.

FraunhoFer: incentiveS
needed to booSt uSe oF
recyclateS
the use of recycled raw materials makes a
direct contribution to tackling climate change,
concludes the Fraunhofer Institute in a new
study commissioned by the recycling major
ALBA Group.
According to the study, ALBA saved more than
4.2 million tonnes of greenhouse gases in
2019 through the closed-loop circulation of 6
million tonnes of recyclables. ‘Recycling leads
to far fewer greenhouse gas emissions than
when primary raw materials are used,’ explains
Axel Schweitzer, ceo of the group. ‘The use of
our quality-tested recycled plastics, for exam-
ple, reduces emissions of greenhouse gases by
more than 50% in comparison with the produc-
tion of plastics from crude oil. There is no bet-
ter argument for the increased use of recy-
clates.’
Ing Markus Hiebel, director of the sustainabili-
ty and participation department at the
Fraunhofer Institute for Environmental, Safety
and Energy Technology UMSICHT, says its life-
cycle analysis down to the kilogram clearly
demonstrates the potential for recycling to
help tackle climate change. ‘The better the
individual stakeholders in the value chain of
products and packaging collaborate, the
greater the potential for possible savings.’
The scientist sees an increasing willingness on
the part of all those involved to take responsi-
bility and to work together more closely with
many manufacturers committing to using recy-
cled raw materials in their products. ‘All in all,
further incentives should be created to
increase the use of recyclates. If the share of
recyclates becomes a purchasing criterion in
the procurement, this will significantly increase
demand,’ Hiebel argues.
Fraunhofer UMSICHT has been researching
the effect of ALA Group’s recycling activities
on the climate and natural resources for 13
years and the results are published annually in
a ‘resources saved by recycling’ report. The
material flows for plastics, metals, waste elec-
trical and electronic equipment, wood, paper/
board/cardboard and glass were included in
the 2019 study. ALBA Group divisions have
saved a total of about 70 million tonnes of
CO2 equivalents worldwide since the begin-
ning of the Fraunhofer investigations in 2007.
This is about 9% of Germany’s total green-
house gas emissions of 805 million tonnes in
2019.

muSt-have SunglaSSeS made From ocean PlaSticS
‘it’s incredible to think that only a year ago this plastic was polluting our oceans
and now it’s something beautiful, turning a problem into a solution,’ says Dutchman
Boyan Slat, founder and ceo of The Ocean Cleanup. The non-profit organisation
developing advanced technologies to rid the world’s oceans and rivers of plastic has
unveiled a product made from the plastic they recovered from the ocean to help
fund their multi-million Euro project.
Ocean Cleanup has taken its first batch of plastic certified from the Great Pacific
Garbage Patch, recycled it, and turned it into something useful and durable: sun-
glasses. With a contribution of EUR 199, supporters have the chance to own a piece
of the Great Pacific Garbage Patch and help fund the continuation of the project, as
100% of the proceeds go directly to future operations.
Reclaiming an area of the oceans said to be the equivalent of 24 football fields pro-
duces the plastic used for each pair of sunglasses. Sunglasses were chosen as the
first product because the organisation wanted to offer something durable and useful
and to remind users of ‘the beauty and importance’ of our oceans.
Ocean Cleanup sunglasses are meant to last and keep their value, having been
designed in California by renowned designer Yves Béhar and his team at fuseproject
and crafted by Italian eyewear producer Safilo. The frame is made with plastic certi-
fied by DNV GL from the Great Pacific Garbage Patch. The case is made with recy-
cled material from System 001, also known as ‘Wilson’, the first ocean clean-up sys-
tem deployed in 2018. With end-of-life in mind every component, from metal hinges
to polarised lenses, are designed to be taken apart easily and recycled again should
this be necessary.

‘Of course, The Ocean Cleanup is only here today because of our supporters, so I
am excited these sunglasses are just another opportunity for everyone to be part of
the clean-up and help us maximize our impact,’ says Slat. ‘I am thankful for the sup-
port of our followers and our partners and for their dedication and efforts to realise
this very important step on our mission to rid the world’s oceans of plastic.’