Subscribe
8 Scrapping with your head in the clouds Dutch aircraft recycling specialist Aircraft End-Of-Life Solutions (AELS) has recycled more than 75 planes. Company ceo Derk-Jan van Heerden, who has a degree in aerospace engineering, is confi...
Read the entire page 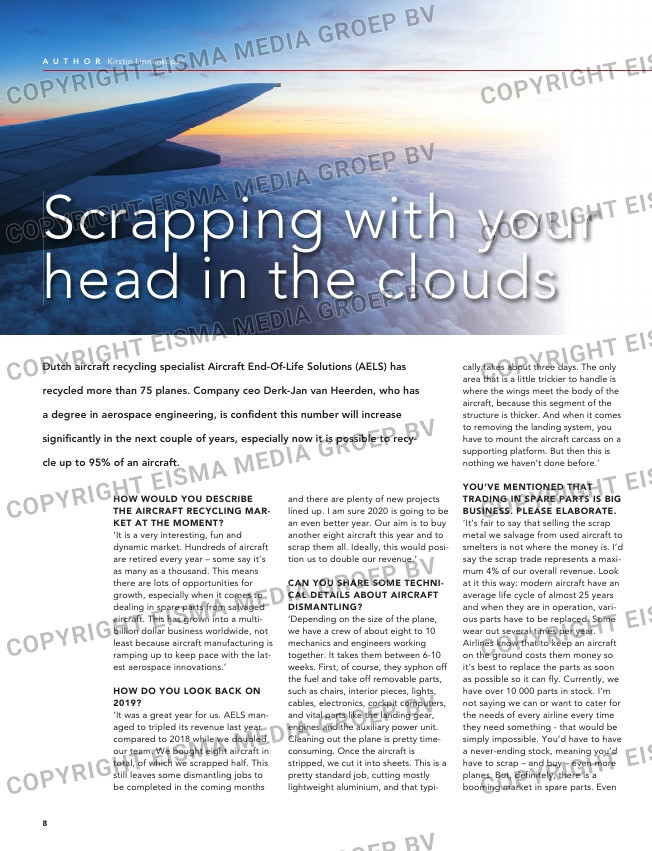 a degree in aerospace engineering, is confident this number will increase

significantly in the next couple of years, especially now it is possible to recy-

if you get a small piece of that very
big pie, that’s good business.’

WHAT HAPPENS TO THE MATERI-
ALS YOU RECOVER?
‘Working electronics are sold to air-
lines. Did you know a brand-new cock-
pit computer costs nearly EUR 200
000? Getting a used one can save you
half of that. Aluminium and steel scrap
goes to smelters to serve various
applications in the aviation or automo-
tive industry. Copper from cables
goes to recyclers or smelters. Engines,
which contain precious metals like
titanium or cobalt, are typically sold to
airlines for reuse. Otherwise, they may
be taken apart to recover the most
valuable parts. Sometimes we do that
ourselves, sometimes they go to pre-
cious metals recyclers. Pretty much all
precious metals go back into new
engines and other high-end aircraft
components.’

WHAT CHANGES HAVE YOU
SEEN IN AIRCRAFT MATERIALS
AND DESIGN?
‘Carbon fibre is now being used to
create aircraft that are more light-
weight than they were. It has become
a popular building block for the avia-
tion industry. This material is still rela-
tively new, though, so recycling pro-
cesses and end markets have yet to
mature. As the waste volume grows,
carbon fibre will open up new applica-
tions for recycled materials. Newer
aircraft are also designed to have two
rather than four engines – achieving
the same performance at a lower
weight. This has resulted in planes
leaving the fleet at a younger age. We
bought an 11-year old plane in 2018,
and a 13-year old one last year.’

WHAT CAN YOU SAY ABOUT
NEW DEVELOPMENTS REGARD-
ING AIRCRAFT SCRAPPING
EQUIPMENT?
‘We rely mostly on scrap shears and
cranes to haul bulky material. Newer,
more powerful models come onto the
market regularly. Diesel-driven shears
are making way for electric ones. But,
honestly, there are no big, innovative
trends regarding equipment. But I’ll

HOW WOULD YOU DESCRIBE
THE AIRCRAFT RECYCLING MAR-
KET AT THE MOMENT?
‘It is a very interesting, fun and
dynamic market. Hundreds of aircraft
are retired every year – some say it’s
as many as a thousand. This means
there are lots of opportunities for
growth, especially when it comes to
dealing in spare parts from salvaged
aircraft. This has grown into a multi-
billion dollar business worldwide, not
least because aircraft manufacturing is
ramping up to keep pace with the lat-
est aerospace innovations.’

HOW DO YOU LOOK BACK ON
2019?
‘It was a great year for us. AELS man-
aged to tripled its revenue last year
compared to 2018 while we doubled
our team. We bought eight aircraft in
total, of which we scrapped half. This
still leaves some dismantling jobs to
be completed in the coming months

and there are plenty of new projects
lined up. I am sure 2020 is going to be
an even better year. Our aim is to buy
another eight aircraft this year and to
scrap them all. Ideally, this would posi-
tion us to double our revenue.’

CAN YOU SHARE SOME TECHNI-
CAL DETAILS ABOUT AIRCRAFT
DISMANTLING?
‘Depending on the size of the plane,
we have a crew of about eight to 10
mechanics and engineers working
together. It takes them between 6-10
weeks. First, of course, they syphon off
the fuel and take off removable parts,
such as chairs, interior pieces, lights,
cables, electronics, cockpit computers,
and vital parts like the landing gear,
engines and the auxiliary power unit.
Cleaning out the plane is pretty time-
consuming. Once the aircraft is
stripped, we cut it into sheets. This is a
pretty standard job, cutting mostly
lightweight aluminium, and that typi-

cally takes about three days. The only
area that is a little trickier to handle is
where the wings meet the body of the
aircraft, because this segment of the
structure is thicker. And when it comes
to removing the landing system, you
have to mount the aircraft carcass on a
supporting platform. But then this is
nothing we haven’t done before.’

YOU’VE MENTIONED THAT
TRADING IN SPARE PARTS IS BIG
BUSINESS. PLEASE ELABORATE.
‘It’s fair to say that selling the scrap
metal we salvage from used aircraft to
smelters is not where the money is. I’d
say the scrap trade represents a maxi-
mum 4% of our overall revenue. Look
at it this way: modern aircraft have an
average life cycle of almost 25 years
and when they are in operation, vari-
ous parts have to be replaced. Some
wear out several times per year.
Airlines know that to keep an aircraft
on the ground costs them money so
it’s best to replace the parts as soon
as possible so it can fly. Currently, we
have over 10 000 parts in stock. I’m
not saying we can or want to cater for
the needs of every airline every time
they need something – that would be
simply impossible. You’d have to have
a never-ending stock, meaning you’d
have to scrap – and buy – even more
planes. But, definitely, there is a
booming market in spare parts. Even