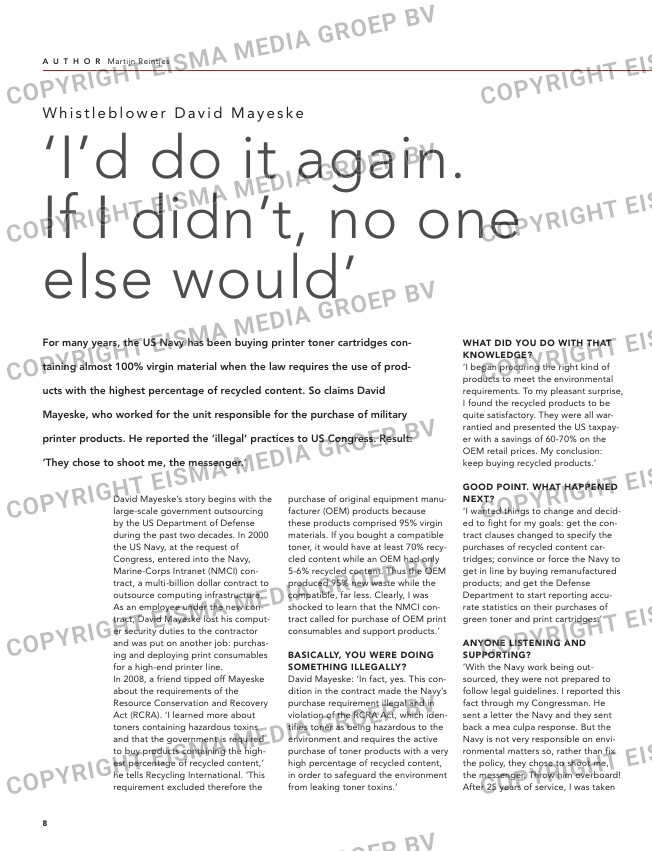 For many years, the US Navy has been buying printer toner cartridges con-

ucts with the highest percentage of recycled content. So claims David

Mayeske, who worked for the unit responsible for the purchase of military

printer products. He reported the ‘illegal’ practices to US Congress. Result:

‘They chose to shoot me, the messenger.’

through hearings and fired within a
year.
They replaced me with an employee
from the NMCI team who wanted to
work for the government. However,
he did not obey the law by procuring
recycled content products.’

Since you Started your
whiStleblowing, haS there
been any change for the
better regarding the uSe
of recycled content in
productS purchaSed by the
navy?
‘Things do not look like they have
changed much in reference to the
numbers being reported publicly by
the Navy. The bureaucrats and politi-
cians are playing a new game right
now where they take a statistical sam-
ple of all the contracts that have
green clauses.’

looking back, waS it all
worth it?
‘It’s been a painful experience, not
least for me personally. The US Navy
has hidden the real reason – the whis-
tleblowing – for kicking me out. I was
fired for acting in an unsafe manner
by standing on a chair. How can you
be dismissed for standing on a chair?
Overall, my fight has not been fruitful
enough. Official government reports
claim the Defense Department has a
compliance rate of 100%. This cannot
be true because the Navy does not
report, or at least not accurately, and
resists to doing so.
If you play the game by the rules out-
lined in the law, you should create a
lot less waste by buying recycled
products, that’s for sure. And that’s
what we all should be pursuing: a bet-
ter environment and far less waste. So
if you ask me, would you do it again,
the answer is ‘YES’, I’d do it again. If I
don’t, no one else would.’

David Mayeske’s story begins with the
large-scale government outsourcing
by the US Department of Defense
during the past two decades. In 2000
the US Navy, at the request of
Congress, entered into the Navy,
Marine-Corps Intranet (NMCI) con-
tract, a multi-billion dollar contract to
outsource computing infrastructure.
As an employee under the new con-
tract, David Mayeske lost his comput-
er security duties to the contractor
and was put on another job: purchas-
ing and deploying print consumables
for a high-end printer line.
In 2008, a friend tipped off Mayeske
about the requirements of the
Resource Conservation and Recovery
Act (RCRA). ‘I learned more about
toners containing hazardous toxins
and that the government is required
to buy products containing the high-
est percentage of recycled content,’
he tells Recycling International. ‘This
requirement excluded therefore the

purchase of original equipment manu-
facturer (OEM) products because
these products comprised 95% virgin
materials. If you bought a compatible
toner, it would have at least 70% recy-
cled content while an OEM had only
5-6% recycled content. Thus the OEM
produced 95% new waste while the
compatible, far less. Clearly, I was
shocked to learn that the NMCI con-
tract called for purchase of OEM print
consumables and support products.’

baSically, you were doing
Something illegally?
David Mayeske: ‘In fact, yes. This con-
dition in the contract made the Navy’s
purchase requirement illegal and in
violation of the RCRA Act, which iden-
tifies toner as being hazardous to the
environment and requires the active
purchase of toner products with a very
high percentage of recycled content,
in order to safeguard the environment
from leaking toner toxins.’

what did you do with that
knowledge?
‘I began procuring the right kind of
products to meet the environmental
requirements. To my pleasant surprise,
I found the recycled products to be
quite satisfactory. They were all war-
rantied and presented the US taxpay-
er with a savings of 60-70% on the
OEM retail prices. My conclusion:
keep buying recycled products.’

good point. what happened
next?
‘I wanted things to change and decid-
ed to fight for my goals: get the con-
tract clauses changed to specify the
purchases of recycled content car-
tridges; convince or force the Navy to
get in line by buying remanufactured
products; and get the Defense
Department to start reporting accu-
rate statistics on their purchases of
green toner and print cartridges.’

anyone liStening and
Supporting?
‘With the Navy work being out-
sourced, they were not prepared to
follow legal guidelines. I reported this
fact through my Congressman. He
sent a letter the Navy and they sent
back a mea culpa response. But the
Navy is not very responsible on envi-
ronmental matters so, rather than fix
the policy, they chose to shoot me,
the messenger. Throw him overboard!
After 25 years of service, I was taken