Subscribe
papermarket analysis new year brings better prospects - for now Prices in the US edge up for OCC and SOP but traders are waiting to see if the brighter pic- ture will be sustained. The new decade started well for recovered paper supp...
Read the entire page 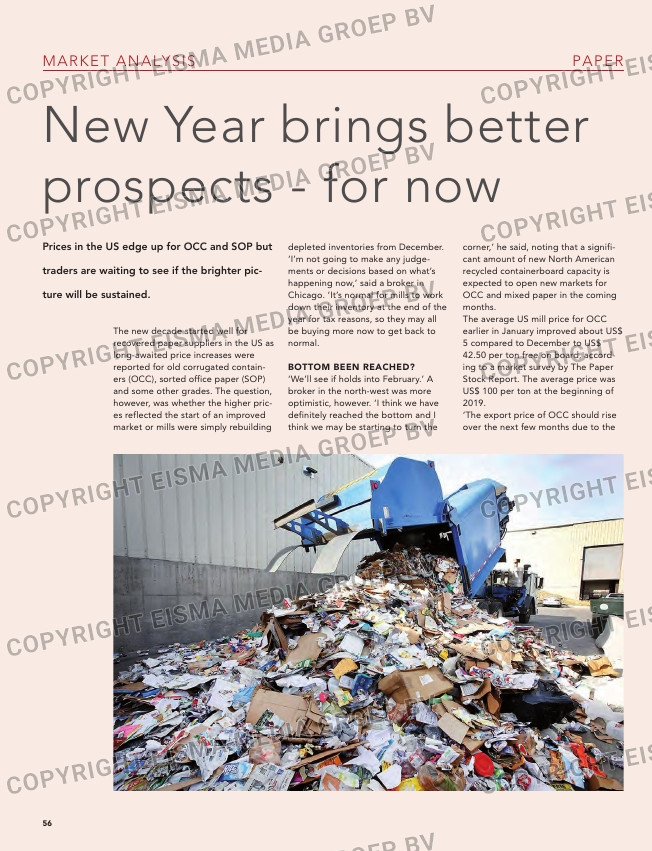 traders are waiting to see if the brighter pic-

ture will be sustained.

The new decade started well for
recovered paper suppliers in the US as
long-awaited price increases were
reported for old corrugated contain-
ers (OCC), sorted office paper (SOP)
and some other grades. The question,
however, was whether the higher pric-
es reflected the start of an improved
market or mills were simply rebuilding

corner,’ he said, noting that a signifi-
cant amount of new North American
recycled containerboard capacity is
expected to open new markets for
OCC and mixed paper in the coming
months.
The average US mill price for OCC
earlier in January improved about US$
5 compared to December to US$
42.50 per ton free on board, accord-
ing to a market survey by The Paper
Stock Report. The average price was
US$ 100 per ton at the beginning of
2019.
‘The export price of OCC should rise
over the next few months due to the

depleted inventories from December.
‘I’m not going to make any judge-
ments or decisions based on what’s
happening now,’ said a broker in
Chicago. ‘It’s normal for mills to work
down their inventory at the end of the
year for tax reasons, so they may all
be buying more now to get back to
normal.

BoTTom Been ReAcheD?
‘We’ll see if holds into February.’ A
broker in the north-west was more
optimistic, however. ‘I think we have
definitely reached the bottom and I
think we may be starting to turn the demand, with China and Asia coming

back into the market,’ said a supplier
in Florida. ‘Domestic prices should go
up due to the demand that we see.’
According to a supplier in Nebraska,
‘Mills are actively buying (OCC). We
were contacted by a mill we haven’t
sold OCC to in over 24 months. There
is a lot of domestic and off-shore
capacity coming on-line in the next
four months. Mills are either stockpil-
ing OCC or trying to make nice with
suppliers they kicked to the kerb dur-
ing the last year.’

SURgIng DLK pRIceS
The supplier noted that new machines
designed to run OCC and mixed
paper are likely to start up with clean-
er double-lined Kraft cuttings (DLK).
That appears to be playing out in the
market, as several traders said DLK
prices at the time of writing have
gone up as much as US$ 20 per ton in
a month to a national average of more
than US$ 90 per ton. ‘A mill we sell
was at US$ 85 per ton in December
and increased to US$ 105 per ton in
January.’
Upcoming new containerboard capac-
ity, along with a projected seasonal