Subscribe
TECHNOLOGY EXPERTS A good example of how Vezzani has helped scrap companies ‘digest’ difficult scrap is the invention and continued development of the PC-AC shear. Initially, all Vezzani intended was to eliminate mechanical complex...
Read the entire page 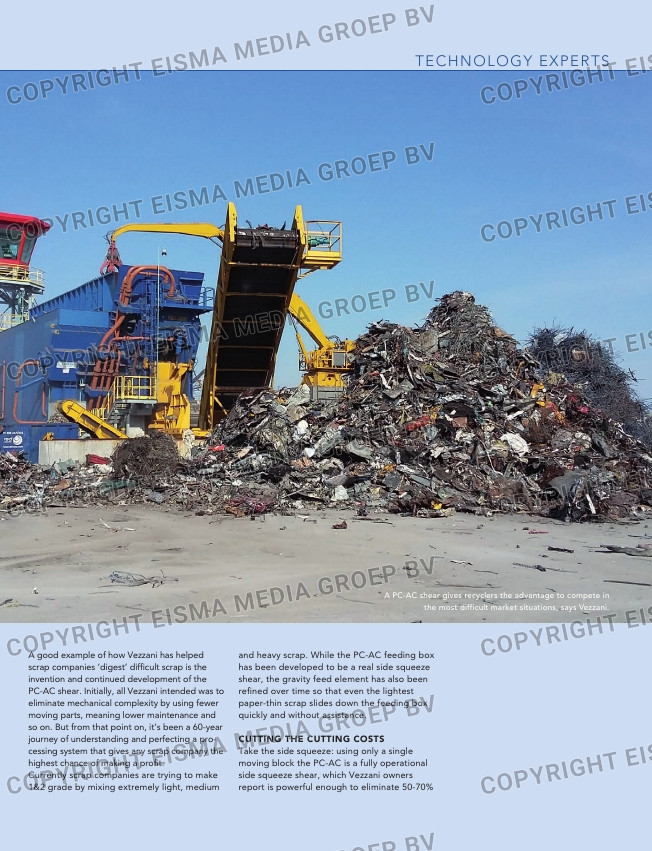 A good example of how Vezzani has helped
scrap companies ‘digest’ difficult scrap is the
invention and continued development of the
PC-AC shear. Initially, all Vezzani intended was to
eliminate mechanical complexity by using fewer
moving parts, meaning lower maintenance and
so on. But from that point on, it’s been a 60-year
journey of understanding and perfecting a pro-
cessing system that gives any scrap company the
highest chance of making a profit.
Currently scrap companies are trying to make
1&2 grade by mixing extremely light, medium

and heavy scrap. While the PC-AC feeding box
has been developed to be a real side squeeze
shear, the gravity feed element has also been
refined over time so that even the lightest
paper-thin scrap slides down the feeding box
quickly and without assistance.

CUTTING THE CUTTING COSTS
Take the side squeeze: using only a single
moving block the PC-AC is a fully operational
side squeeze shear, which Vezzani owners
report is powerful enough to eliminate 50-70%

A PC-AC shear gives recyclers the advantage to compete in
the most difficult market situations, says Vezzani.

out the challenges – but is anyone listening?
It’s problems such as these that have always
attracted Vezzani’s attention.

INVENTOR AND FRONTRUNNER
Since its start in the 1960s, Vezzani has invent-
ed machinery that didn’t exist before. This
includes the PCF press for steel mills, various
types of presses that separate liquid and solid
urban waste, different shearing machines and
their most recognised product, the PC-AC
gravity feed shear.