Subscribe
non-ferroUs Hopes rise on improved Us-China relations China GDP China’s gross domestic production con- tinued to slow in 2019, according to an unofficial but authoritative report from Renmin University in China. Ahead of official an...
Read the entire page 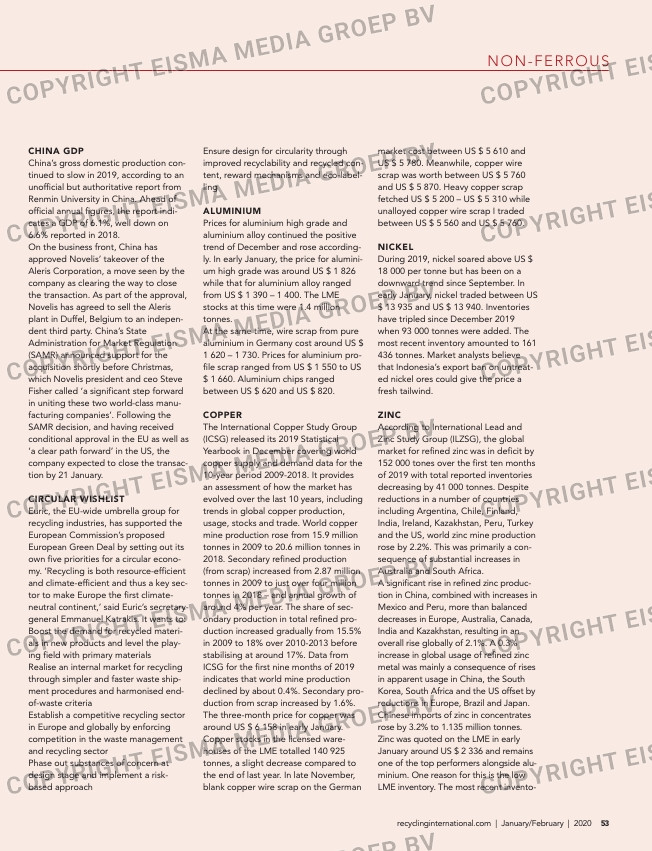 China GDP
China’s gross domestic production con-
tinued to slow in 2019, according to an
unofficial but authoritative report from
Renmin University in China. Ahead of
official annual figures, the report indi-
cates a GDP of 6.1%, well down on
6.6% reported in 2018.
On the business front, China has
approved Novelis’ takeover of the
Aleris Corporation, a move seen by the
company as clearing the way to close
the transaction. As part of the approval,
Novelis has agreed to sell the Aleris
plant in Duffel, Belgium to an indepen-
dent third party. China’s State
Administration for Market Regulation
(SAMR) announced support for the
acquisition shortly before Christmas,
which Novelis president and ceo Steve
Fisher called ‘a significant step forward
in uniting these two world-class manu-
facturing companies’. Following the
SAMR decision, and having received
conditional approval in the EU as well as
‘a clear path forward’ in the US, the
company expected to close the transac-
tion by 21 January.

CiRCULaR WiShLiST
Euric, the EU-wide umbrella group for
recycling industries, has supported the
European Commission’s proposed
European Green Deal by setting out its
own five priorities for a circular econo-
my. ‘Recycling is both resource-efficient
and climate-efficient and thus a key sec-
tor to make Europe the first climate-
neutral continent,’ said Euric’s secretary-
general Emmanuel Katrakis. It wants to:
Boost the demand for recycled materi-
als in new products and level the play-
ing field with primary materials
Realise an internal market for recycling
through simpler and faster waste ship-
ment procedures and harmonised end-
of-waste criteria
Establish a competitive recycling sector
in Europe and globally by enforcing
competition in the waste management
and recycling sector
Phase out substances of concern at
design stage and implement a risk-
based approach

COPPER
The International Copper Study Group
(ICSG) released its 2019 Statistical
Yearbook in December covering world
copper supply and demand data for the
10-year period 2009-2018. It provides
an assessment of how the market has
evolved over the last 10 years, including
trends in global copper production,
usage, stocks and trade. World copper
mine production rose from 15.9 million
tonnes in 2009 to 20.6 million tonnes in
2018. Secondary refined production
(from scrap) increased from 2.87 million
tonnes in 2009 to just over four million
tonnes in 2018 – and annual growth of
around 4% per year. The share of sec-
ondary production in total refined pro-
duction increased gradually from 15.5%
in 2009 to 18% over 2010-2013 before
stabilising at around 17%. Data from
ICSG for the first nine months of 2019
indicates that world mine production
declined by about 0.4%. Secondary pro-
duction from scrap increased by 1.6%.
The three-month price for copper was
around US $ 6 158 in early January.
Copper stocks in the licensed ware-
houses of the LME totalled 140 925
tonnes, a slight decrease compared to
the end of last year. In late November,
blank copper wire scrap on the German

niCKEL
During 2019, nickel soared above US $
18 000 per tonne but has been on a
downward trend since September. In
early January, nickel traded between US
$ 13 935 and US $ 13 940. Inventories
have tripled since December 2019
when 93 000 tonnes were added. The
most recent inventory amounted to 161
436 tonnes. Market analysts believe
that Indonesia’s export ban on untreat-
ed nickel ores could give the price a
fresh tailwind.

ZinC
According to International Lead and
Zinc Study Group (ILZSG), the global
market for refined zinc was in deficit by
152 000 tones over the first ten months
of 2019 with total reported inventories
decreasing by 41 000 tonnes. Despite
reductions in a number of countries
including Argentina, Chile, Finland,
India, Ireland, Kazakhstan, Peru, Turkey
and the US, world zinc mine production
rose by 2.2%. This was primarily a con-
sequence of substantial increases in
Australia and South Africa.
A significant rise in refined zinc produc-
tion in China, combined with increases in
Mexico and Peru, more than balanced
decreases in Europe, Australia, Canada,
India and Kazakhstan, resulting in an
overall rise globally of 2.1%. A 0.3%
increase in global usage of refined zinc
metal was mainly a consequence of rises
in apparent usage in China, the South
Korea, South Africa and the US offset by
reductions in Europe, Brazil and Japan.
Chinese imports of zinc in concentrates
rose by 3.2% to 1.135 million tonnes.
Zinc was quoted on the LME in early
January around US $ 2 336 and remains
one of the top performers alongside alu-
minium. One reason for this is the low
LME inventory. The most recent invento-