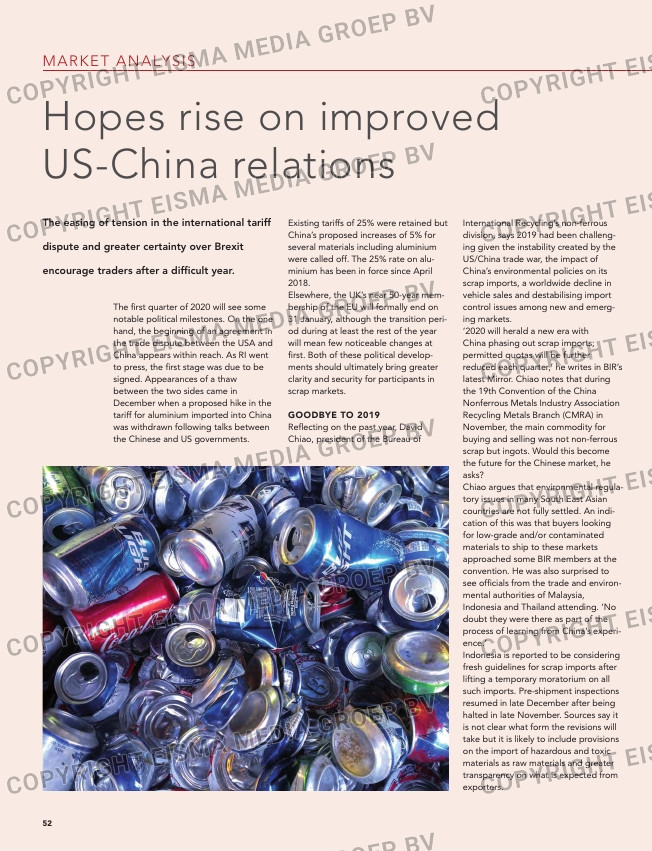 dispute and greater certainty over Brexit

encourage traders after a difficult year.

China GDP
China’s gross domestic production con-
tinued to slow in 2019, according to an
unofficial but authoritative report from
Renmin University in China. Ahead of
official annual figures, the report indi-
cates a GDP of 6.1%, well down on
6.6% reported in 2018.
On the business front, China has
approved Novelis’ takeover of the
Aleris Corporation, a move seen by the
company as clearing the way to close
the transaction. As part of the approval,
Novelis has agreed to sell the Aleris
plant in Duffel, Belgium to an indepen-
dent third party. China’s State
Administration for Market Regulation
(SAMR) announced support for the
acquisition shortly before Christmas,
which Novelis president and ceo Steve
Fisher called ‘a significant step forward
in uniting these two world-class manu-
facturing companies’. Following the
SAMR decision, and having received
conditional approval in the EU as well as
‘a clear path forward’ in the US, the
company expected to close the transac-
tion by 21 January.

CiRCULaR WiShLiST
Euric, the EU-wide umbrella group for
recycling industries, has supported the
European Commission’s proposed
European Green Deal by setting out its
own five priorities for a circular econo-
my. ‘Recycling is both resource-efficient
and climate-efficient and thus a key sec-
tor to make Europe the first climate-
neutral continent,’ said Euric’s secretary-
general Emmanuel Katrakis. It wants to:
Boost the demand for recycled materi-
als in new products and level the play-
ing field with primary materials
Realise an internal market for recycling
through simpler and faster waste ship-
ment procedures and harmonised end-
of-waste criteria
Establish a competitive recycling sector
in Europe and globally by enforcing
competition in the waste management
and recycling sector
Phase out substances of concern at
design stage and implement a risk-
based approach

The first quarter of 2020 will see some
notable political milestones. On the one
hand, the beginning of an agreement in
the trade dispute between the USA and
China appears within reach. As RI went
to press, the first stage was due to be
signed. Appearances of a thaw
between the two sides came in
December when a proposed hike in the
tariff for aluminium imported into China
was withdrawn following talks between
the Chinese and US governments.

Existing tariffs of 25% were retained but
China’s proposed increases of 5% for
several materials including aluminium
were called off. The 25% rate on alu-
minium has been in force since April
2018.
Elsewhere, the UK’s near 50-year mem-
bership of the EU will formally end on
31 January, although the transition peri-
od during at least the rest of the year
will mean few noticeable changes at
first. Both of these political develop-
ments should ultimately bring greater
clarity and security for participants in
scrap markets.

GOODBYE TO 2019
Reflecting on the past year, David
Chiao, president of the Bureau of

International Recycling’s non-ferrous
division, says 2019 had been challeng-
ing given the instability created by the
US/China trade war, the impact of
China’s environmental policies on its
scrap imports, a worldwide decline in
vehicle sales and destabilising import
control issues among new and emerg-
ing markets.
‘2020 will herald a new era with
China phasing out scrap imports;
permitted quotas will be further
reduced each quarter,’ he writes in BIR’s
latest Mirror. Chiao notes that during
the 19th Convention of the China
Nonferrous Metals Industry Association
Recycling Metals Branch (CMRA) in
November, the main commodity for
buying and selling was not non-ferrous
scrap but ingots. Would this become
the future for the Chinese market, he
asks?
Chiao argues that environmental regula-
tory issues in many South East Asian
countries are not fully settled. An indi-
cation of this was that buyers looking
for low-grade and/or contaminated
materials to ship to these markets
approached some BIR members at the
convention. He was also surprised to
see officials from the trade and environ-
mental authorities of Malaysia,
Indonesia and Thailand attending. ‘No
doubt they were there as part of the
process of learning from China’s experi-
ence.’
Indonesia is reported to be considering
fresh guidelines for scrap imports after
lifting a temporary moratorium on all
such imports. Pre-shipment inspections
resumed in late December after being
halted in late November. Sources say it
is not clear what form the revisions will
take but it is likely to include provisions
on the import of hazardous and toxic
materials as raw materials and greater
transparency on what is expected from
exporters.