Subscribe
ferrous 47recyclinginternational.com | January/February | 2020 son. December continued the gains and another US$15 per tonne was added to end the year at US$ 270 per tonne for HMS I/II 80/20, which had remained unchanged at the ti...
Read the entire page 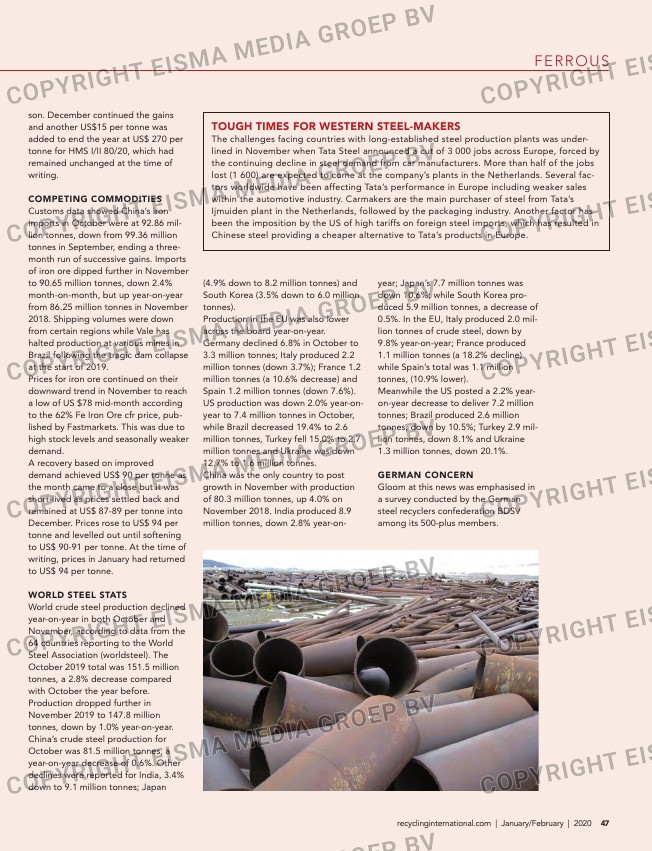 son. December continued the gains
and another US$15 per tonne was
added to end the year at US$ 270 per
tonne for HMS I/II 80/20, which had
remained unchanged at the time of
writing.

COMPETING COMMODITIES
Customs data showed China’s iron
imports in October were at 92.86 mil-
lion tonnes, down from 99.36 million
tonnes in September, ending a three-
month run of successive gains. Imports
of iron ore dipped further in November
to 90.65 million tonnes, down 2.4%
month-on-month, but up year-on-year
from 86.25 million tonnes in November
2018. Shipping volumes were down
from certain regions while Vale has
halted production at various mines in
Brazil following the tragic dam collapse
at the start of 2019.
Prices for iron ore continued on their
downward trend in November to reach
a low of US $78 mid-month according
to the 62% Fe Iron Ore cfr price, pub-
lished by Fastmarkets. This was due to
high stock levels and seasonally weaker
demand.
A recovery based on improved
demand achieved US$ 90 per tonne as
the month came to a close but it was
short-lived as prices settled back and
remained at US$ 87-89 per tonne into
December. Prices rose to US$ 94 per
tonne and levelled out until softening
to US$ 90-91 per tonne. At the time of
writing, prices in January had returned
to US$ 94 per tonne.

WOrlD STEEl STATS
World crude steel production declined
year-on-year in both October and
November, according to data from the
64 countries reporting to the World
Steel Association (worldsteel). The
October 2019 total was 151.5 million
tonnes, a 2.8% decrease compared
with October the year before.
Production dropped further in
November 2019 to 147.8 million
tonnes, down by 1.0% year-on-year.
China’s crude steel production for
October was 81.5 million tonnes, a
year-on-year decrease of 0.6%. Other
declines were reported for India, 3.4%
down to 9.1 million tonnes; Japan

TOuGh TIMES fOr WESTErN STEEl-MAkErS
The challenges facing countries with long-established steel production plants was under-
lined in November when Tata Steel announced a cut of 3 000 jobs across Europe, forced by
the continuing decline in steel demand from car manufacturers. More than half of the jobs
lost (1 600) are expected to come at the company’s plants in the Netherlands. Several fac-
tors worldwide have been affecting Tata’s performance in Europe including weaker sales
within the automotive industry. Carmakers are the main purchaser of steel from Tata’s
Ijmuiden plant in the Netherlands, followed by the packaging industry. Another factor has
been the imposition by the US of high tariffs on foreign steel imports, which has resulted in
Chinese steel providing a cheaper alternative to Tata’s products in Europe.

GErMAN CONCErN
Gloom at this news was emphasised in
a survey conducted by the German
steel recyclers confederation BDSV
among its 500-plus members.