Subscribe
46 The winner recycles it all! Whether it’s Wimbledon or the Olympic Games, recycling is now centre stage in the world of sport. Here we consider how sustain- ability is becoming a trait worthy of champions. Olympic and Paralympic ...
Read the entire page 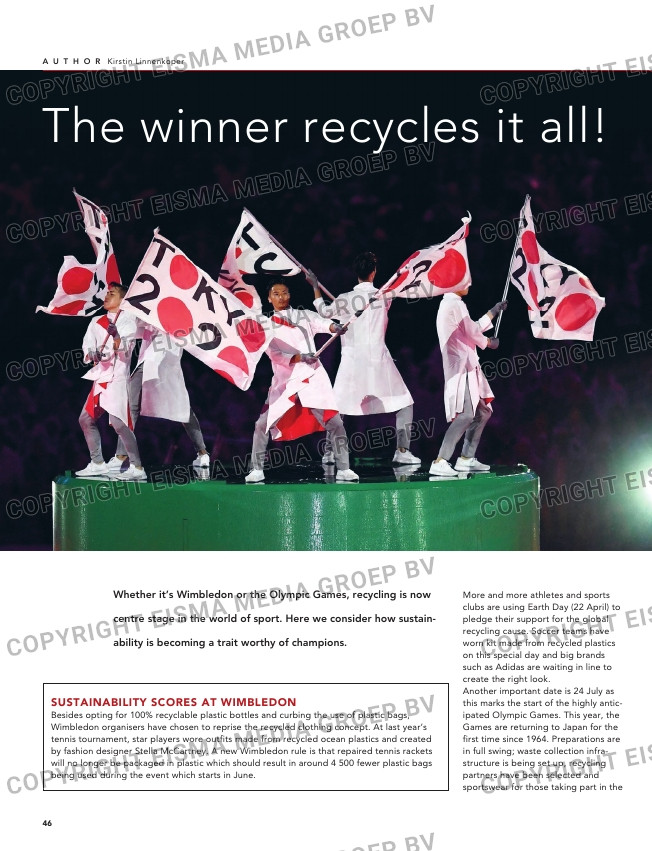 The winner recycles it all!

Whether it’s Wimbledon or the Olympic Games, recycling is now

centre stage in the world of sport. Here we consider how sustain-

ability is becoming a trait worthy of champions.

Olympic and Paralympic Games is
being made from donated, recycled
textiles.
This last initiative was made possible
by installing more than 250 donation
boxes at popular stores throughout
the capital Tokyo. Fun fact: Saori
Yoshida, triple Olympic gold medalist
(freestyle wrestling), contributed the
T-shirt she wore when training for the
2016 Rio Games. It’s been made clear
from the outset that recycling is not
just a side issue.

MEDALS WITH MEANING
All the Olympic and Paralympics med-
als are being made from recycled met-
als – sourced from discarded smart-
phones. More than 1 600 municipali-
ties (covering 90% of Japan) partici-
pated in a nationwide take-back and
recycling scheme which reclaimed
over six million phones.
The Tokyo 2020 Medal Project was
spearheaded by Japanese mobile car-
rier NTT Docomo, which ran the cam-
paign between April 2017 and March
2019. In those two years the company
collected enough ‘relevant material’

More and more athletes and sports
clubs are using Earth Day (22 April) to
pledge their support for the global
recycling cause. Soccer teams have
worn kit made from recycled plastics
on this special day and big brands
such as Adidas are waiting in line to
create the right look.
Another important date is 24 July as
this marks the start of the highly antic-
ipated Olympic Games. This year, the
Games are returning to Japan for the
first time since 1964. Preparations are
in full swing; waste collection infra-
structure is being set up, recycling
partners have been selected and
sportswear for those taking part in the

SUSTAINABILITY SCORES AT WIMBLEDON
Besides opting for 100% recyclable plastic bottles and curbing the use of plastic bags,
Wimbledon organisers have chosen to reprise the recycled clothing concept. At last year’s
tennis tournament, star players wore outfits made from recycled ocean plastics and created
by fashion designer Stella McCartney. A new Wimbledon rule is that repaired tennis rackets
will no longer be packaged in plastic which should result in around 4 500 fewer plastic bags
being used during the event which starts in June.