Subscribe
BUSINESS 43recyclinginternational.com | January/February | 2020 Ambitious tyre recycler The US, like most countries around the world, has a significant tyre dis- posal problem and generates in excess of 250 million end-of-life tyre...
Read the entire page 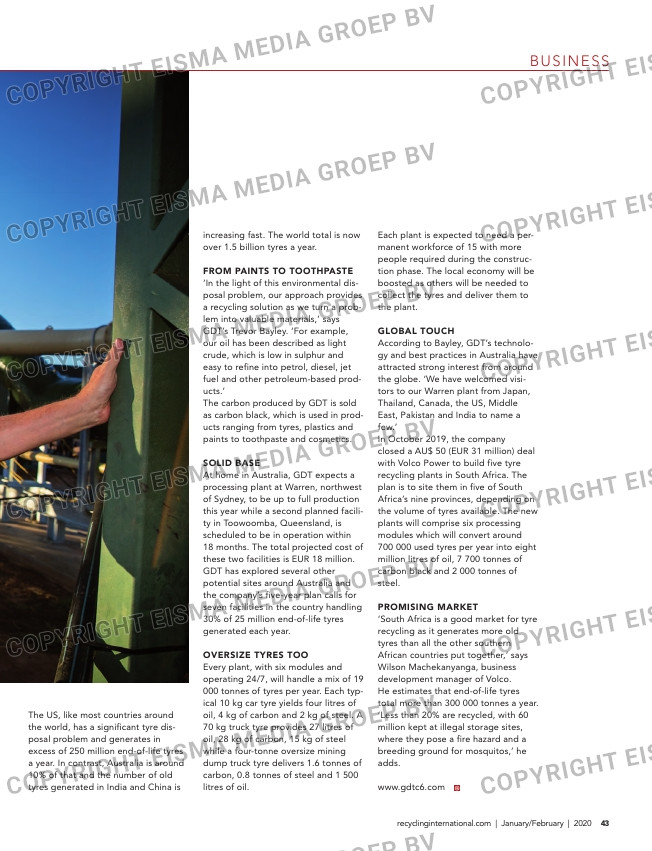 The US, like most countries around
the world, has a significant tyre dis-
posal problem and generates in
excess of 250 million end-of-life tyres
a year. In contrast, Australia is around
10% of that and the number of old
tyres generated in India and China is

increasing fast. The world total is now
over 1.5 billion tyres a year.

FROM PAINTS TO TOOTHPASTE
‘In the light of this environmental dis-
posal problem, our approach provides
a recycling solution as we turn a prob-
lem into valuable materials,’ says
GDT’s Trevor Bayley. ‘For example,
our oil has been described as light
crude, which is low in sulphur and
easy to refine into petrol, diesel, jet
fuel and other petroleum-based prod-
ucts.’
The carbon produced by GDT is sold
as carbon black, which is used in prod-
ucts ranging from tyres, plastics and
paints to toothpaste and cosmetics.

SOLID BASE
At home in Australia, GDT expects a
processing plant at Warren, northwest
of Sydney, to be up to full production
this year while a second planned facili-
ty in Toowoomba, Queensland, is
scheduled to be in operation within
18 months. The total projected cost of
these two facilities is EUR 18 million.
GDT has explored several other
potential sites around Australia and
the company’s five-year plan calls for
seven facilities in the country handling
30% of 25 million end-of-life tyres
generated each year.

Each plant is expected to need a per-
manent workforce of 15 with more
people required during the construc-
tion phase. The local economy will be
boosted as others will be needed to
collect the tyres and deliver them to
the plant.

GLOBAL TOUCH
According to Bayley, GDT’s technolo-
gy and best practices in Australia have
attracted strong interest from around
the globe. ‘We have welcomed visi-
tors to our Warren plant from Japan,
Thailand, Canada, the US, Middle
East, Pakistan and India to name a
few.’
In October 2019, the company
closed a AU$ 50 (EUR 31 million) deal
with Volco Power to build five tyre
recycling plants in South Africa. The
plan is to site them in five of South
Africa’s nine provinces, depending on
the volume of tyres available. The new
plants will comprise six processing
modules which will convert around
700 000 used tyres per year into eight
million litres of oil, 7 700 tonnes of
carbon black and 2 000 tonnes of
steel.

PROMISING MARKET
‘South Africa is a good market for tyre
recycling as it generates more old
tyres than all the other southern
African countries put together,’ says
Wilson Machekanyanga, business
development manager of Volco.
He estimates that end-of-life tyres
total more than 300 000 tonnes a year.
‘Less than 20% are recycled, with 60
million kept at illegal storage sites,
where they pose a fire hazard and a
breeding ground for mosquitos,’ he
adds.