Subscribe
Optimistic Copper out- look for 2020 H2 The International Copper Study Group has produced detailed analysis of the major changes in the global market-place for copper scrap over the past decade – and the likely short-term future. ket...
Read the entire page 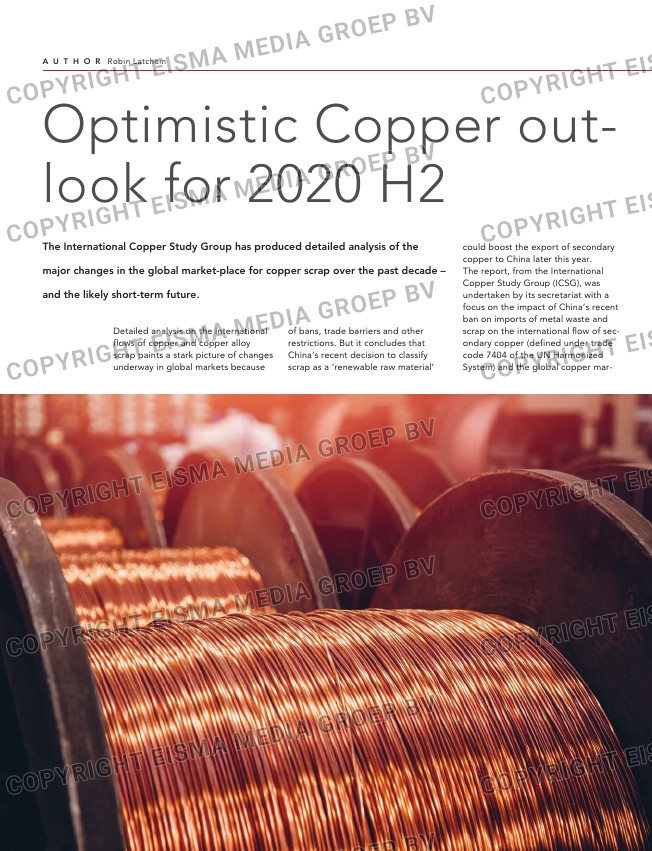 and the likely short-term future.

ket. The analysis begins a decade ago
with a detailed review of the long-
term trends of international trade
flows for the period 2009-2018 and
sets out the chronology of restrictions
since 2017 (see boxes). More than a
dozen conclusions are drawn and
some are listed below.

CHINA IS CRUCIAL
The analysis underlines how Chinese
waste import restrictions have impact-
ed most on the exports of copper and
alloy scrap from the United States,
which fell from around 50 000 tonnes
per month in 2016 and 2017 to almost
marginal levels in 2018 and remained
around 10 000 tonnes per year in
2019. The US reallocated its exports
to Malaysia, India, Japan and others,
so that its export volumes in 2019
remained around 70-80 000 tonnes
per month in gross weight, slightly
below recent years. EU exports of
copper and copper alloy scrap, mean-
while, fell faster than US exports, in
part because most were copper alloys,
directly banned as ‘Category 6’ in
2019. With close to 90% of EU exports
of recycled raw materials going to
China, the region has been slower to
react to the import ban.
The 2019 ban and direct restrictions
through taxes on imports of copper
and alloy scrap from the US in the sec-
ond part of 2018 started a global real-
location of exports of low grade cop-
per scrap. This material, broadly clas-
sified by ICSG statistics as ‘copper
scrap alloys’, was being diverted to
Malaysia, Japan Cambodia, Thailand
and other locations including Pakistan
and the Middle East. Here, it is
believed, the material is being melted
and re-exported to China as copper
alloy ingots, blister copper or other
categories known as ‘black copper’
that contains 98% copper or more,
close to the limit of impurities pro-
posed by the Chinese authorities.

of bans, trade barriers and other
restrictions. But it concludes that
China’s recent decision to classify
scrap as a ‘renewable raw material’

could boost the export of secondary
copper to China later this year.
The report, from the International
Copper Study Group (ICSG), was
undertaken by its secretariat with a
focus on the impact of China’s recent
ban on imports of metal waste and
scrap on the international flow of sec-
ondary copper (defined under trade
code 7404 of the UN Harmonized
System) and the global copper mar-