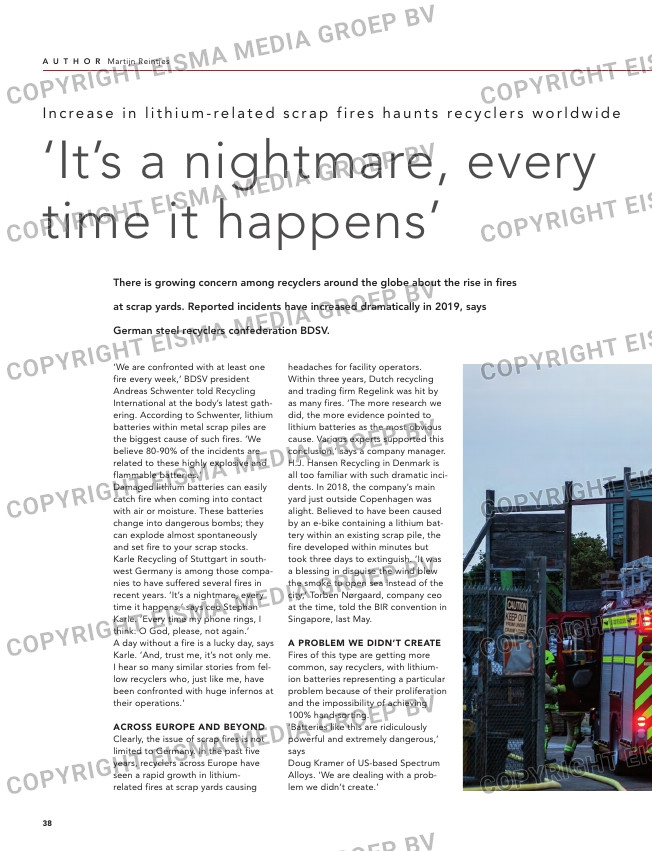 ‘It’s a nightmare, every
time it happens’

at scrap yards. Reported incidents have increased dramatically in 2019, says

EXTINGUISH? OR SHRED TO
ZERO?
The question is how can these fires be
prevented from becoming so big and
uncontrollable? Recyclers, helped by
fire experts, prove to be pretty inven-
tive. Increasingly, temperature-sensing
cameras trained on scrap piles are
being installed at yards. Tubes capa-
ble of delivering high-pressure water
are being placed within scrap piles.
Another option is the use of fire sup-
pressants and, if possible, a daily prac-
tice of ‘shredding to zero’ rather than
allowing scrap piles to grow too big.
Jeff Harris, managing director of
Macaulay Metals, in Wellington, New

‘We are confronted with at least one
fire every week,’ BDSV president
Andreas Schwenter told Recycling
International at the body’s latest gath-
ering. According to Schwenter, lithium
batteries within metal scrap piles are
the biggest cause of such fires. ‘We
believe 80-90% of the incidents are
related to these highly explosive and
flammable batteries.’
Damaged lithium batteries can easily
catch fire when coming into contact
with air or moisture. These batteries
change into dangerous bombs; they
can explode almost spontaneously
and set fire to your scrap stocks.
Karle Recycling of Stuttgart in south-
west Germany is among those compa-
nies to have suffered several fires in
recent years. ‘It’s a nightmare, every
time it happens,’ says ceo Stephan
Karle. ‘Every time my phone rings, I
think: O God, please, not again.’
A day without a fire is a lucky day, says
Karle. ‘And, trust me, it’s not only me.
I hear so many similar stories from fel-
low recyclers who, just like me, have
been confronted with huge infernos at
their operations.’

ACROSS EUROPE AND BEYOND
Clearly, the issue of scrap fires is not
limited to Germany. In the past five
years, recyclers across Europe have
seen a rapid growth in lithium-
related fires at scrap yards causing

headaches for facility operators.
Within three years, Dutch recycling
and trading firm Regelink was hit by
as many fires. ‘The more research we
did, the more evidence pointed to
lithium batteries as the most obvious
cause. Various experts supported this
conclusion,’ says a company manager.
H.J. Hansen Recycling in Denmark is
all too familiar with such dramatic inci-
dents. In 2018, the company’s main
yard just outside Copenhagen was
alight. Believed to have been caused
by an e-bike containing a lithium bat-
tery within an existing scrap pile, the
fire developed within minutes but
took three days to extinguish. ‘It was
a blessing in disguise the wind blew
the smoke to open sea instead of the
city,’ Torben Nørgaard, company ceo
at the time, told the BIR convention in
Singapore, last May.

A PROBLEM WE DIDN’T CREATE
Fires of this type are getting more
common, say recyclers, with lithium-
ion batteries representing a particular
problem because of their proliferation
and the impossibility of achieving
100% hand-sorting.
‘Batteries like this are ridiculously
powerful and extremely dangerous,’
says
Doug Kramer of US-based Spectrum
Alloys. ‘We are dealing with a prob-
lem we didn’t create.’