Subscribe
34 Recyclers imagine the best of both worlds P a p e r a n d p l a s t i c s : A quarter of the top 100 global brands want to reduce plastics production, accord- ing to Daniel Nordigarden of McKinsey & Company. There are some do...
Read the entire page 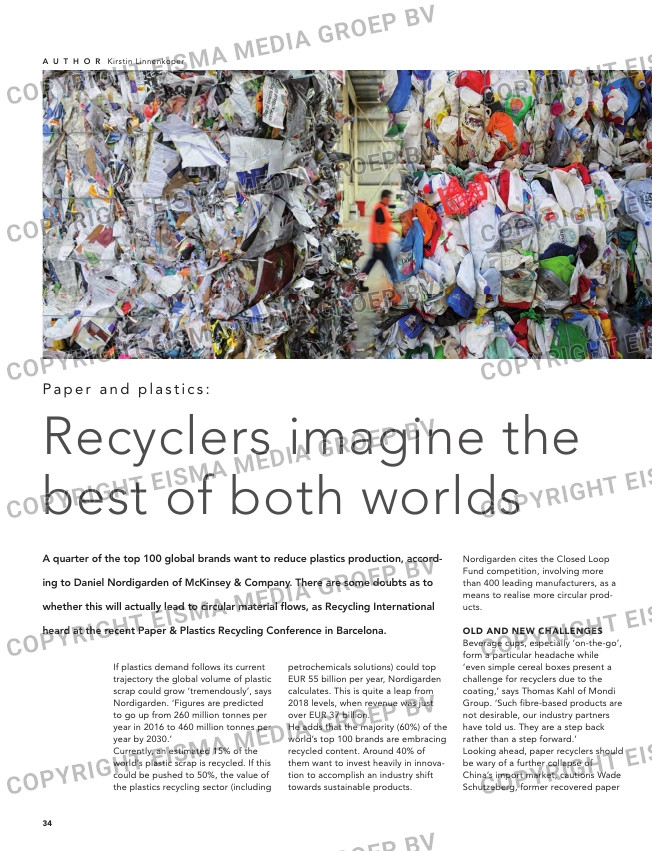 Recyclers imagine the
best of both worlds

A quarter of the top 100 global brands want to reduce plastics production, accord-

ing to Daniel Nordigarden of McKinsey & Company. There are some doubts as to

whether this will actually lead to circular material flows, as Recycling International

heard at the recent Paper & Plastics Recycling Conference in Barcelona.

specialist at America Chung Nam. ‘We
will see what happens in the coming
six months. I don’t doubt there will be
another shift in the market,’ he says.
‘If you survive that, you’re good.’
Meanwhile, the outlook for tissue has
remained positive, with only slight
ups-and-downs. ‘I am happy to say
the consumption rate is still consis-
tent,’ comments Luigi Trombetta of
Lucart Group. ‘Yes, there is room for
demand to grow – but I still consider
ours a very lucky sector.’ Lucart Group
currently owns 10 tissue production
sites worldwide with a capacity of 395
000 tonnes per year.
‘Like many other manufacturers, we
are trying to increase the level of recy-
clates in our portfolio,’ Trombetta
adds. ‘In order to take the next step,
we are exploring the minds of mod-
ern-day consumers. We’re asking the
question; “Is brown the new white?”
For the moment, I have to say the
public still has a different perception
of the quality and comfort of virgin tis-
sue products versus recycled tissue
products.’

the poWer oF additives
‘There is so much talk about plastics –
and most of it not in a positive way,’
laments Olivier Keiser, chief sustain-
ability officer at Songwon industrial
group. ‘The fact of the matter is: plas-
tics won’t be going anywhere. The
plastics age will endure.’
Since its launch in the 1960s,
Songwon has been transformed from
a local South Korean polymer addi-
tives supplier to a truly global special-
ist chemicals company, with nine man-
ufacturing plants and about 1000
employees.
‘We are currently the second-largest
producer of polymer stabilisers world-
wide,’ Keiser says. Songwon’s innova-
tive blends extend the life of recycled
PP automotive interiors and it is one
of the first chemical companies in the
world to package its products in bags
containing 50% recycled PE.

If plastics demand follows its current
trajectory the global volume of plastic
scrap could grow ‘tremendously’, says
Nordigarden. ‘Figures are predicted
to go up from 260 million tonnes per
year in 2016 to 460 million tonnes per
year by 2030.’
Currently, an estimated 15% of the
world’s plastic scrap is recycled. If this
could be pushed to 50%, the value of
the plastics recycling sector (including

petrochemicals solutions) could top
EUR 55 billion per year, Nordigarden
calculates. This is quite a leap from
2018 levels, when revenue was just
over EUR 37 billion.
He adds that the majority (60%) of the
world’s top 100 brands are embracing
recycled content. Around 40% of
them want to invest heavily in innova-
tion to accomplish an industry shift
towards sustainable products.

old and neW challenges
Beverage cups, especially ‘on-the-go’,
form a particular headache while
‘even simple cereal boxes present a
challenge for recyclers due to the
coating,’ says Thomas Kahl of Mondi
Group. ‘Such fibre-based products are
not desirable, our industry partners
have told us. They are a step back
rather than a step forward.’
Looking ahead, paper recyclers should
be wary of a further collapse of
China’s import market, cautions Wade
Schutzeberg, former recovered paper