Subscribe
28 so it made sense for OSO to do the processing in the UK. Currently, 95% of the pellets produced in Leeds go to China but Shen expects that to change. ‘All the raw materials [for China] come from Europe or the US so it makes sens...
Read the entire page 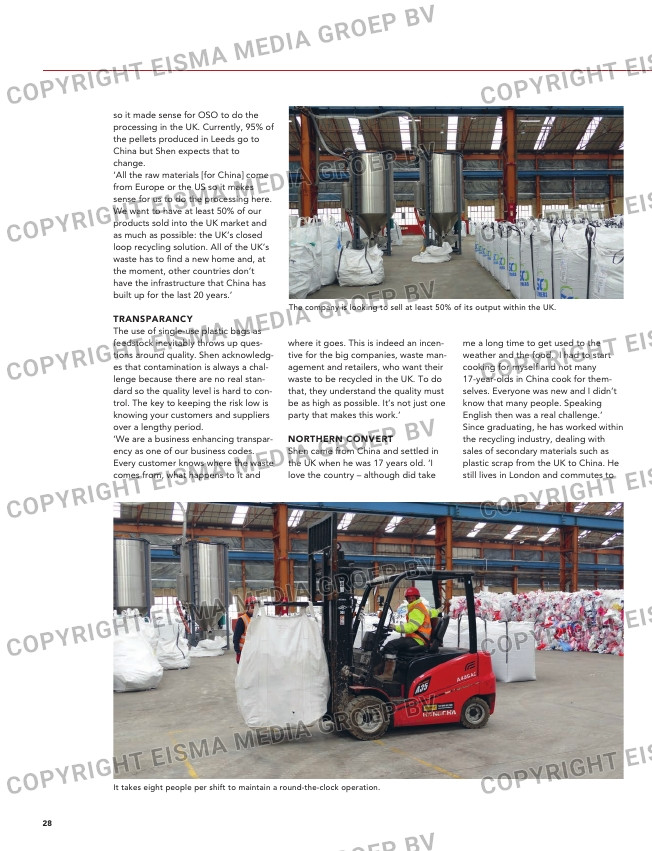 so it made sense for OSO to do the
processing in the UK. Currently, 95% of
the pellets produced in Leeds go to
China but Shen expects that to
change.
‘All the raw materials [for China] come
from Europe or the US so it makes
sense for us to do the processing here.
We want to have at least 50% of our
products sold into the UK market and
as much as possible: the UK’s closed
loop recycling solution. All of the UK’s
waste has to find a new home and, at
the moment, other countries don’t
have the infrastructure that China has
built up for the last 20 years.’

TRANSPARANCY
The use of single-use plastic bags as
feedstock inevitably throws up ques-
tions around quality. Shen acknowledg-
es that contamination is always a chal-
lenge because there are no real stan-
dard so the quality level is hard to con-
trol. The key to keeping the risk low is
knowing your customers and suppliers
over a lengthy period.
‘We are a business enhancing transpar-
ency as one of our business codes.
Every customer knows where the waste
comes from, what happens to it and

where it goes. This is indeed an incen-
tive for the big companies, waste man-
agement and retailers, who want their
waste to be recycled in the UK. To do
that, they understand the quality must
be as high as possible. It’s not just one
party that makes this work.’

NORTHERN CONVERT
Shen came from China and settled in
the UK when he was 17 years old. ‘I
love the country – although did take

me a long time to get used to the
weather and the food. I had to start
cooking for myself and not many
17-year-olds in China cook for them-
selves. Everyone was new and I didn’t
know that many people. Speaking
English then was a real challenge.’
Since graduating, he has worked within
the recycling industry, dealing with
sales of secondary materials such as
plastic scrap from the UK to China. He
still lives in London and commutes to

Yorkshire every week. And he is enjoy-
ing life in the northern city. ‘Personally
speaking, the people in Leeds are
nicer. In London everyone is much bus-
ier, they are often rushing for some-
thing. Leeds is more relaxed and the
people are friendlier.’

RESPONDING TO CHANGE
Western observers frequently mention
the pace at which change can take
place in China, usually because of the
centralised nature of the state. For
example, many in the West were taken
by surprise by the transformation in the
market for imported secondary materi-
als. The Green Fence policy in 2013
was an early warning that the shutters
were coming down but it was National
Sword in 2017-18 and subsequent reg-
ulations and licensing restrictions that
drove major – and almost immediate –
changes to global trading markets.
Establishing OSO Polymers to manu-
facture pellets in the UK was an obvi-
ous development: ‘We saw the oppor-
tunity because China shut the market.’
Other opportunities are also being
developed. Shen is a director of the
sister company OSO Environmental
which is responsible for material pur-

The company is looking to sell at least 50% of its output within the UK.