Subscribe
PLASTICS 27recyclinginternational.com | March/April | 2020 trying to get into this industry,’ he says. ‘They can see the opportunity and this is a big change for this county. They will spend money and effort to find the right ...
Read the entire page 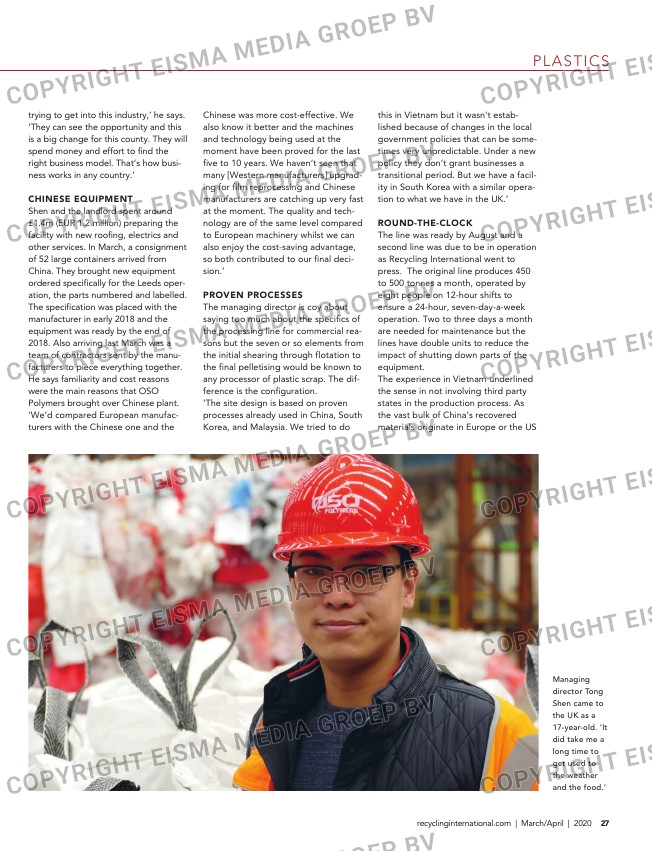 trying to get into this industry,’ he says.
‘They can see the opportunity and this
is a big change for this county. They will
spend money and effort to find the
right business model. That’s how busi-
ness works in any country.’

CHINESE EQUIPMENT
Shen and the landlord spent around
£1.4m (EUR 1.2 million) preparing the
facility with new roofing, electrics and
other services. In March, a consignment
of 52 large containers arrived from
China. They brought new equipment
ordered specifically for the Leeds oper-
ation, the parts numbered and labelled.
The specification was placed with the
manufacturer in early 2018 and the
equipment was ready by the end of
2018. Also arriving last March was a
team of contractors sent by the manu-
facturers to piece everything together.
He says familiarity and cost reasons
were the main reasons that OSO
Polymers brought over Chinese plant.
‘We’d compared European manufac-
turers with the Chinese one and the

Chinese was more cost-effective. We
also know it better and the machines
and technology being used at the
moment have been proved for the last
five to 10 years. We haven’t seen that
many [Western manufacturers] upgrad-
ing for film reprocessing and Chinese
manufacturers are catching up very fast
at the moment. The quality and tech-
nology are of the same level compared
to European machinery whilst we can
also enjoy the cost-saving advantage,
so both contributed to our final deci-
sion.’

PROVEN PROCESSES
The managing director is coy about
saying too much about the specifics of
the processing line for commercial rea-
sons but the seven or so elements from
the initial shearing through flotation to
the final pelletising would be known to
any processor of plastic scrap. The dif-
ference is the configuration.
‘The site design is based on proven
processes already used in China, South
Korea, and Malaysia. We tried to do

this in Vietnam but it wasn’t estab-
lished because of changes in the local
government policies that can be some-
times very unpredictable. Under a new
policy they don’t grant businesses a
transitional period. But we have a facil-
ity in South Korea with a similar opera-
tion to what we have in the UK.’

ROUND-THE-CLOCK
The line was ready by August and a
second line was due to be in operation
as Recycling International went to
press. The original line produces 450
to 500 tonnes a month, operated by
eight people on 12-hour shifts to
ensure a 24-hour, seven-day-a-week
operation. Two to three days a month
are needed for maintenance but the
lines have double units to reduce the
impact of shutting down parts of the
equipment.
The experience in Vietnam underlined
the sense in not involving third party
states in the production process. As
the vast bulk of China’s recovered
materials originate in Europe or the US

Managing
director Tong
Shen came to
the UK as a
17-year-old. ‘It
did take me a
long time to
get used to
the weather
and the food.’