Subscribe
26 Chinese investment shows Britain the way A new plastics facility in the northern English city of Leeds is almost certainly the UK’s first Chinese-owned recycling operation. trying to get into this industry,’ he says. ‘They ...
Read the entire page 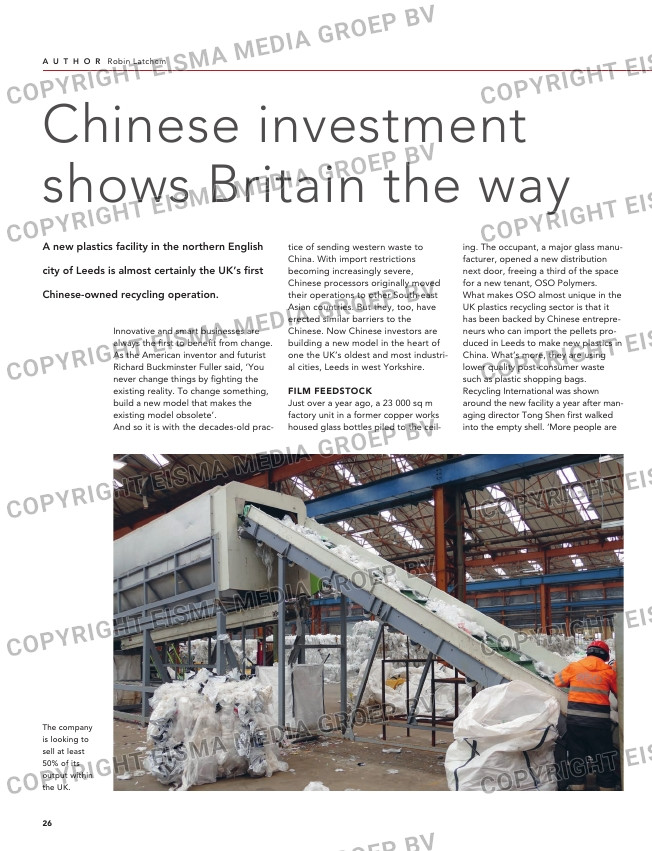 city of Leeds is almost certainly the UK’s first

trying to get into this industry,’ he says.
‘They can see the opportunity and this
is a big change for this county. They will
spend money and effort to find the
right business model. That’s how busi-
ness works in any country.’

CHINESE EQUIPMENT
Shen and the landlord spent around
£1.4m (EUR 1.2 million) preparing the
facility with new roofing, electrics and
other services. In March, a consignment
of 52 large containers arrived from
China. They brought new equipment
ordered specifically for the Leeds oper-
ation, the parts numbered and labelled.
The specification was placed with the
manufacturer in early 2018 and the
equipment was ready by the end of
2018. Also arriving last March was a
team of contractors sent by the manu-
facturers to piece everything together.
He says familiarity and cost reasons
were the main reasons that OSO
Polymers brought over Chinese plant.
‘We’d compared European manufac-
turers with the Chinese one and the

Innovative and smart businesses are
always the first to benefit from change.
As the American inventor and futurist
Richard Buckminster Fuller said, ‘You
never change things by fighting the
existing reality. To change something,
build a new model that makes the
existing model obsolete’.
And so it is with the decades-old prac-

tice of sending western waste to
China. With import restrictions
becoming increasingly severe,
Chinese processors originally moved
their operations to other South-east
Asian countries. But they, too, have
erected similar barriers to the
Chinese. Now Chinese investors are
building a new model in the heart of
one the UK’s oldest and most industri-
al cities, Leeds in west Yorkshire.

FILM FEEDSTOCK
Just over a year ago, a 23 000 sq m
factory unit in a former copper works
housed glass bottles piled to the ceil-

ing. The occupant, a major glass manu-
facturer, opened a new distribution
next door, freeing a third of the space
for a new tenant, OSO Polymers.
What makes OSO almost unique in the
UK plastics recycling sector is that it
has been backed by Chinese entrepre-
neurs who can import the pellets pro-
duced in Leeds to make new plastics in
China. What’s more, they are using
lower quality post-consumer waste
such as plastic shopping bags.
Recycling International was shown
around the new facility a year after man-
aging director Tong Shen first walked
into the empty shell. ‘More people are

The company
is looking to
sell at least
50% of its
output within
the UK.