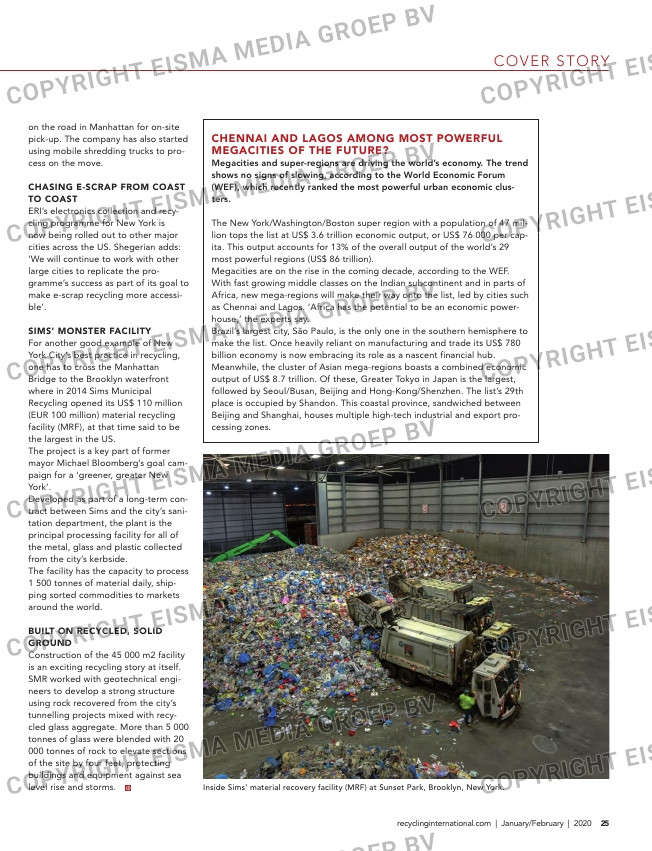 cHENNAI AND lAGoS AMoNG MoST poWERful
MEGAcITIES of THE fuTuRE?
Megacities and super-regions are driving the world’s economy. the trend
shows no signs of slowing, according to the World Economic Forum
(WEF), which recently ranked the most powerful urban economic clus-
ters.

The New York/Washington/Boston super region with a population of 47 mil-
lion tops the list at US$ 3.6 trillion economic output, or US$ 76 000 per cap-
ita. This output accounts for 13% of the overall output of the world’s 29
most powerful regions (US$ 86 trillion).
Megacities are on the rise in the coming decade, according to the WEF.
With fast growing middle classes on the Indian subcontinent and in parts of
Africa, new mega-regions will make their way onto the list, led by cities such
as Chennai and Lagos. ‘Africa has the potential to be an economic power-
house,’ the experts say.
Brazil’s largest city, São Paulo, is the only one in the southern hemisphere to
make the list. Once heavily reliant on manufacturing and trade its US$ 780
billion economy is now embracing its role as a nascent financial hub.
Meanwhile, the cluster of Asian mega-regions boasts a combined economic
output of US$ 8.7 trillion. Of these, Greater Tokyo in Japan is the largest,
followed by Seoul/Busan, Beijing and Hong-Kong/Shenzhen. The list’s 29th
place is occupied by Shandon. This coastal province, sandwiched between
Beijing and Shanghai, houses multiple high-tech industrial and export pro-
cessing zones.

on the road in Manhattan for on-site
pick-up. The company has also started
using mobile shredding trucks to pro-
cess on the move.

cHASING E-ScRAp fRoM coAST
To coAST
ERI’s electronics collection and recy-
cling programme for New York is
now being rolled out to other major
cities across the US. Shegerian adds:
‘We will continue to work with other
large cities to replicate the pro-
gramme’s success as part of its goal to
make e-scrap recycling more accessi-
ble’.

SIMS’ MoNSTER fAcIlITY
For another good example of New
York City’s best practice in recycling,
one has to cross the Manhattan
Bridge to the Brooklyn waterfront
where in 2014 Sims Municipal
Recycling opened its US$ 110 million
(EUR 100 million) material recycling
facility (MRF), at that time said to be
the largest in the US.
The project is a key part of former
mayor Michael Bloomberg’s goal cam-
paign for a ‘greener, greater New
York’.
Developed as part of a long-term con-
tract between Sims and the city’s sani-
tation department, the plant is the
principal processing facility for all of
the metal, glass and plastic collected
from the city’s kerbside.
The facility has the capacity to process
1 500 tonnes of material daily, ship-
ping sorted commodities to markets
around the world.

BuIlT oN REcYclED, SolID
GRouND
Construction of the 45 000 m2 facility
is an exciting recycling story at itself.
SMR worked with geotechnical engi-
neers to develop a strong structure
using rock recovered from the city’s
tunnelling projects mixed with recy-
cled glass aggregate. More than 5 000
tonnes of glass were blended with 20
000 tonnes of rock to elevate sections
of the site by four feet, protecting
buildings and equipment against sea
level rise and storms.