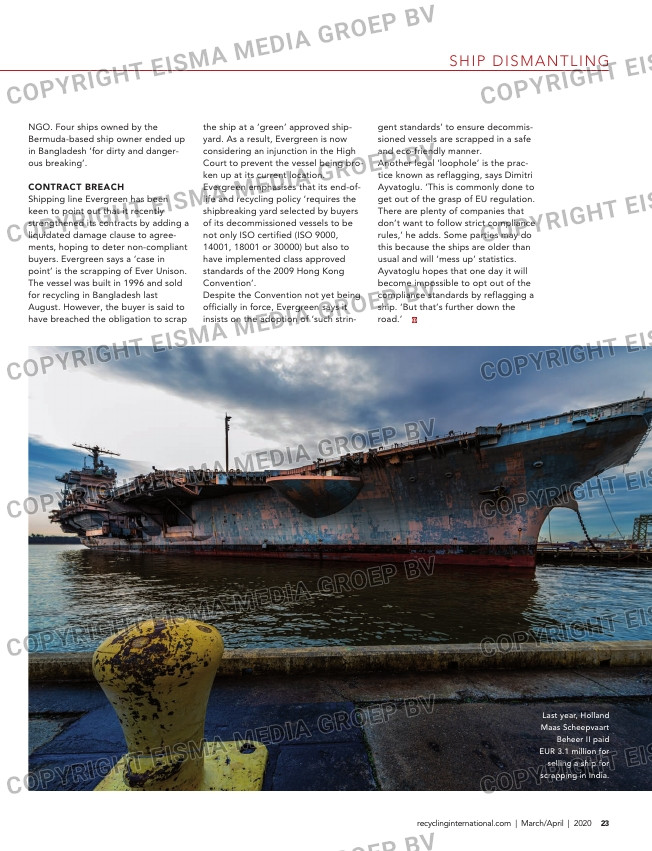 NGO. Four ships owned by the
Bermuda-based ship owner ended up
in Bangladesh ‘for dirty and danger-
ous breaking’.

CONTRACT BREACH
Shipping line Evergreen has been
keen to point out that it recently
strengthened its contracts by adding a
liquidated damage clause to agree-
ments, hoping to deter non-compliant
buyers. Evergreen says a ‘case in
point’ is the scrapping of Ever Unison.
The vessel was built in 1996 and sold
for recycling in Bangladesh last
August. However, the buyer is said to
have breached the obligation to scrap

the ship at a ‘green’ approved ship-
yard. As a result, Evergreen is now
considering an injunction in the High
Court to prevent the vessel being bro-
ken up at its current location.
Evergreen emphasises that its end-of-
life and recycling policy ‘requires the
shipbreaking yard selected by buyers
of its decommissioned vessels to be
not only ISO certified (ISO 9000,
14001, 18001 or 30000) but also to
have implemented class approved
standards of the 2009 Hong Kong
Convention’.
Despite the Convention not yet being
officially in force, Evergreen says it
insists on the adoption of ‘such strin-

US based Basel Action Network
(BAN), a member organisation of
Shipbreaking Platform. ‘These owners
use foreign flags to hide their dirty
work but our research clearly lays the
blame on these companies, who act in
violation of international law and
norms.’
Other well-known shipping companies
accused of dumping toxic ships on
south Asian beaches in 2019 include
Costamare, CMA CGM, Diamond
Offshore, ENSCO, MOL, MSC, NYK
Line, Tidewater and Vale.

CRIMINAL INVESTIGATIONS
Two legal cases last year resulted in
large penalties for ship owners.
Holland Maas Scheepvaart Beheer II
paid EUR 3.1 million for selling a ship
for scrapping in India while the
Norwegian Maritime Authority fined
the Singaporean end-of-life services
company Wirana Shipping EUR 709
000 for attempting to send redundant
barge carrier Eide Carrier for demoli-
tion at Gadani in Pakistan.
Danish container shipping giant
Maersk scrapped four vessels on
Indian beaches last year, according to
the Shipbreaking Platform. The com-
pany is said to have left the Danish
shipping registry ‘in order to circum-
vent the new EU laws requiring the
use of EU-approved recycling facili-
ties, and at least two of the ships even
left EU waters in breach of an interna-
tional and European ban on the
export of hazardous waste to devel-
oping countries’.
In November, a Bangladeshi court
condemned the illegal breaking of
Maersk’s FPSO North Sea Producer
after it had been sold to GMS for cash
and allegedly fraudulently exported
from the UK in 2016. Criminal investi-
gations are underway in the UK.
Eleven vessels from the container
shipping line Evergreen are said to
have ended up in Bangladesh and
India last year. In the past couple of
years, the company has been under
the spotlight for damaging shipbreak-
ing practices. Dry bulk shipping com-
pany Berge Bulk is runner-up for
‘worst ship dumper’, according to the

gent standards’ to ensure decommis-
sioned vessels are scrapped in a safe
and eco-friendly manner.
Another legal ‘loophole’ is the prac-
tice known as reflagging, says Dimitri
Ayvatoglu. ‘This is commonly done to
get out of the grasp of EU regulation.
There are plenty of companies that
don’t want to follow strict compliance
rules,’ he adds. Some parties may do
this because the ships are older than
usual and will ‘mess up’ statistics.
Ayvatoglu hopes that one day it will
become impossible to opt out of the
compliance standards by reflagging a
ship. ‘But that’s further down the
road.’

selling a ship for
scrapping in India.