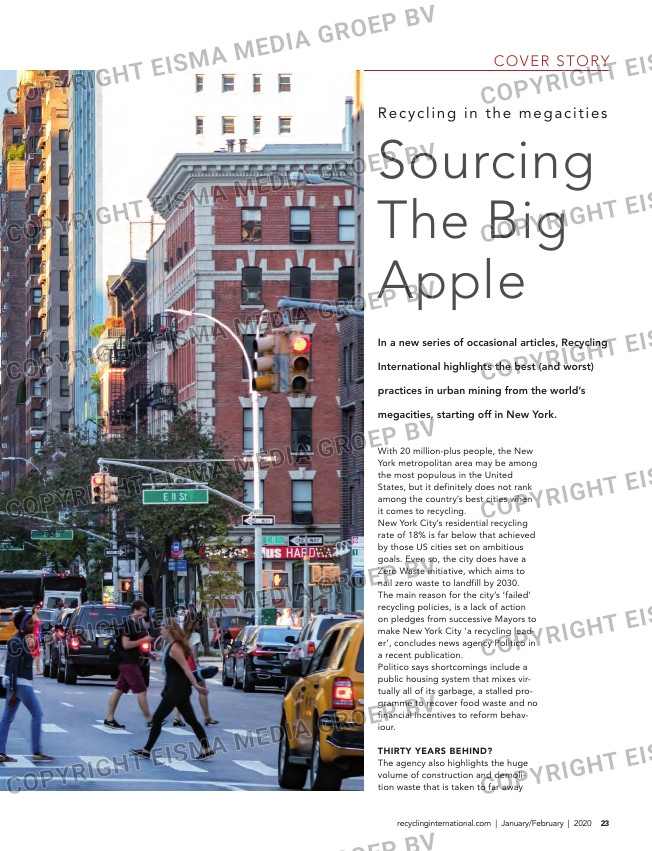 Recyc l ing in the megac i t ies

In a new series of occasional articles, recycling

International highlights the best (and worst)

practices in urban mining from the world’s

megacities, starting off in New York.

With 20 million-plus people, the New
York metropolitan area may be among
the most populous in the United
States, but it definitely does not rank
among the country’s best cities when
it comes to recycling.
New York City’s residential recycling
rate of 18% is far below that achieved
by those US cities set on ambitious
goals. Even so, the city does have a
Zero Waste initiative, which aims to
nail zero waste to landfill by 2030.
The main reason for the city’s ‘failed’
recycling policies, is a lack of action
on pledges from successive Mayors to
make New York City ‘a recycling lead-
er’, concludes news agency Politico in
a recent publication.
Politico says shortcomings include a
public housing system that mixes vir-
tually all of its garbage, a stalled pro-
gramme to recover food waste and no
financial incentives to reform behav-
iour.

THIRTY YEARS BEHIND?
The agency also highlights the huge
volume of construction and demoli-
tion waste that is taken to far away