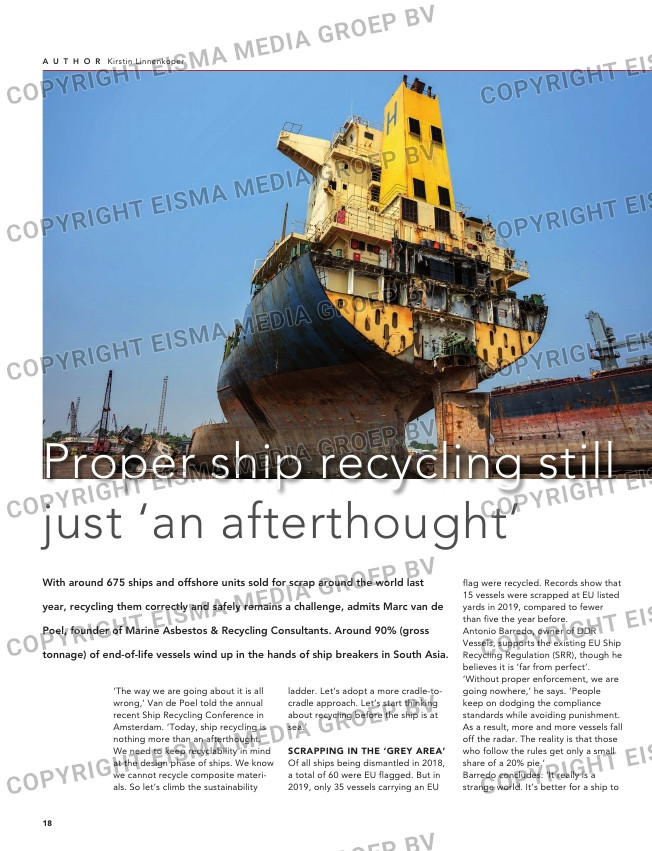 tonnage) of end-of-life vessels wind up in the hands of ship breakers in South Asia.

go down the illegal route than the
legal one; better to not be listed rath-
er than be listed. I have seen several
ships in EU harbours with a Panama
flag even though they are EU owned.
Guess where it’s going for disman-
tling? Right here in Europe.’
He maintains the situation is applica-
ble to any EU flagged vessel, even
the largest ones, and yards are still
actively dismantling ships. ‘The har-
bour and environmental authorities
condone it because they argue
that the site falls outside the existing
regulations,’ Barredo explains. ‘It’s a
grey area. It seems, sad as it may be,
we have to make things happen by
force.’
The businessman estimates that
around 80-90% of the vessels go
‘rogue’, damaging the ship recycling
industry as a whole. Furthermore,
other cases such as storage barges
not needing a flag or abandoned ves-
sels – even military ones – are not
addressed at all in the SRR.
Due to the limited scope of today’s
regulations, he argues, the market has
built up an ‘excessive’ development of
unnecessary capacity. ‘For 350 000
light displacement (ldt) of EU flagged
vessels, we had around 450 000 ldt
capacity in December 2018 and
around 1.4 million ldt at the end of
last year,’ Barredo says. ‘It seems that
the EU commission is more focussed
on gaining capacity than enforcing the
SRR properly.’
He also questions what is the best fate
for old submarines. ‘They’re often so
rotten, they obviously need to be
recycled. However, they are sold to
regular scrapyards instead of compa-
nies specialising in vessel or subma-
rine dismantling.’ It would be wise to
sell them to listed yards with a track
record in this niche so risks associated
with such a huge dismantling job
would be ‘significantly lower’, he
maintains.

‘The way we are going about it is all
wrong,’ Van de Poel told the annual
recent Ship Recycling Conference in
Amsterdam. ‘Today, ship recycling is
nothing more than an afterthought.
We need to keep recyclability in mind
at the design phase of ships. We know
we cannot recycle composite materi-
als. So let’s climb the sustainability

ladder. Let’s adopt a more cradle-to-
cradle approach. Let’s start thinking
about recycling before the ship is at
sea.’

flag were recycled. Records show that
15 vessels were scrapped at EU listed
yards in 2019, compared to fewer
than five the year before.
Antonio Barredo, owner of DDR
Vessels, supports the existing EU Ship
Recycling Regulation (SRR), though he
believes it is ‘far from perfect’.
‘Without proper enforcement, we are
going nowhere,’ he says. ‘People
keep on dodging the compliance
standards while avoiding punishment.
As a result, more and more vessels fall
off the radar. The reality is that those
who follow the rules get only a small
share of a 20% pie.’
Barredo concludes: ‘It really is a
strange world. It’s better for a ship to