Subscribe
15recyclinginternational.com | March/April | 2020 TRENDS & UPDATES FAIR EXPORTERS SUFFER FROM ‘A FEW BAD APPLES’ A ban on plastic exports from the UK could prove to be very harmful, warns The Recycling Association following ...
Read the entire page 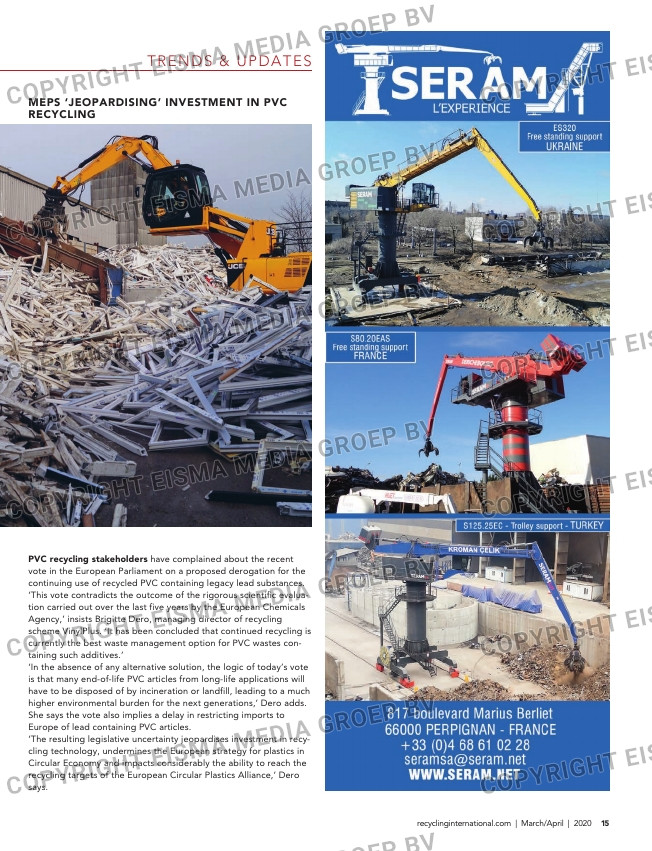 FAIR EXPORTERS SUFFER FROM ‘A FEW BAD
APPLES’
A ban on plastic exports from the UK could prove to be very
harmful, warns The Recycling Association following publication
of the country’s new Environment Bill.
‘It is great to see that the Environment Bill has been brought
before Parliament and there is much in it that is positive,’ says
TRA’s managing director Simon Ellin. ‘This includes measures to
require producers to take more responsibility for the recycling
of what they place on the market and a consistent approach to
recycling by local authorities.’

STRICT RULES IN PLACE
However, Ellin is concerned about the introduction of what it
describes as a power to ban the export of plastic to developing
countries. ‘There are already strict rules in place on recycled
plastic exports via the Basel Convention and the rules that the
countries importing the plastics have introduced.’
According to TRA, what is needed is better enforcement of
those regulations by funding the UK’s environment agencies
sufficiently to catch those who are breaking the rules. ‘Those
who trade legitimately should not be penalised by the actions
of a few bad apples,’ Ellin insists.

TRACKING MATERIALS
For that reason, TRA is investing in blockchain technology to
track all exports to compliant, and audited end destinations.
‘We aim to assist the agencies in our common compliance goals
and it is this partnership approach to finding solutions that is a
far better and more sustainable option than blanket bans,’ Ellin
explains.

LET IMPORTERS DECIDE
For developing countries, importing plastics can be a way of
supporting their economies by giving them cheap commodities
to support their manufacturing industries. But the chief execu-
tive insists: ‘It should be up to them to decide whether they
wish to take our materials and up to us to ensure we meet the
specifications for those commodities if they do.’

PVC recycling stakeholders have complained about the recent
vote in the European Parliament on a proposed derogation for the
continuing use of recycled PVC containing legacy lead substances.
‘This vote contradicts the outcome of the rigorous scientific evalua-
tion carried out over the last five years by the European Chemicals
Agency,’ insists Brigitte Dero, managing director of recycling
scheme VinylPlus. ‘It has been concluded that continued recycling is
currently the best waste management option for PVC wastes con-
taining such additives.’
‘In the absence of any alternative solution, the logic of today’s vote
is that many end-of-life PVC articles from long-life applications will
have to be disposed of by incineration or landfill, leading to a much
higher environmental burden for the next generations,’ Dero adds.
She says the vote also implies a delay in restricting imports to
Europe of lead containing PVC articles.
‘The resulting legislative uncertainty jeopardises investment in recy-
cling technology, undermines the European strategy for plastics in
Circular Economy and impacts considerably the ability to reach the
recycling targets of the European Circular Plastics Alliance,’ Dero
says.