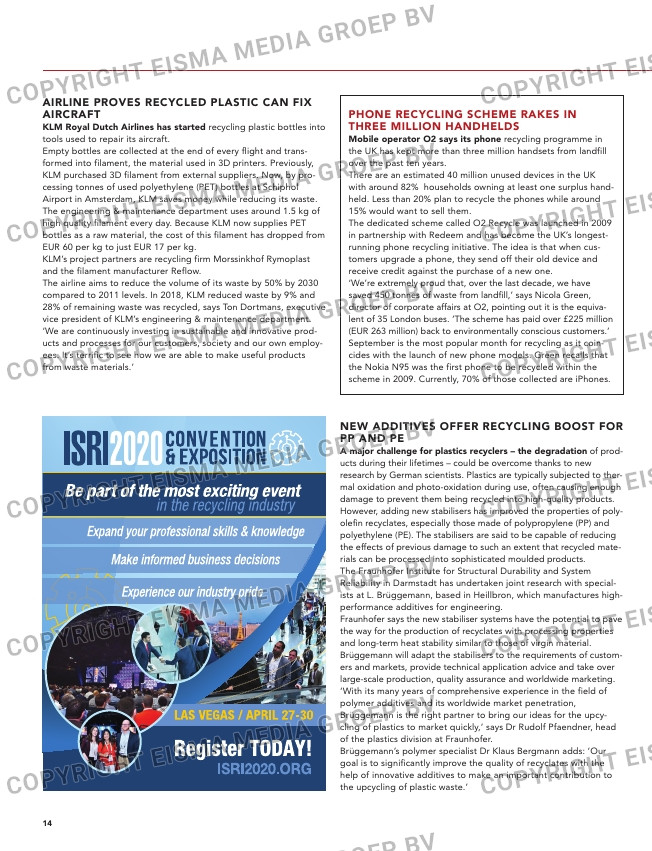 phone recycling scheme raKes in
three million handhelds
mobile operator o2 says its phone recycling programme in
the UK has kept more than three million handsets from landfill
over the past ten years.
There are an estimated 40 million unused devices in the UK
with around 82% households owning at least one surplus hand-
held. Less than 20% plan to recycle the phones while around
15% would want to sell them.
The dedicated scheme called O2 Recycle was launched in 2009
in partnership with Redeem and has become the UK’s longest-
running phone recycling initiative. The idea is that when cus-
tomers upgrade a phone, they send off their old device and
receive credit against the purchase of a new one.
‘We’re extremely proud that, over the last decade, we have
saved 450 tonnes of waste from landfill,’ says Nicola Green,
director of corporate affairs at O2, pointing out it is the equiva-
lent of 35 London buses. ‘The scheme has paid over £225 million
(EUR 263 million) back to environmentally conscious customers.’
September is the most popular month for recycling as it coin-
cides with the launch of new phone models. Green recalls that
the Nokia N95 was the first phone to be recycled within the
scheme in 2009. Currently, 70% of those collected are iPhones.

e-scrap crime in europe ‘a huge problem’
the value of electronic scrap illegally handled in europe in 2018
is calculated to be EUR 151 million. It is estimated this scavenging
across the continent amounts to more than 152 000 tonnes of
whole products and components.
The scale of the theft or misappropriation for financial gain of
e-waste has been highlighted in a report from the European
Electronics Recyclers Association (EERA). EERA members and other
EU recyclers provided data relating to 520 000 tonnes of e-scrap
treated in 43 treatment locations in nine different countries and
concludes scavenging is a ‘huge problem’.
The information covered various collection categories: cooling and
freezing, screens large household appliances, small household
appliances and IT equipment. Two main types of scavenging were
investigated:
• whole products, particularly those having higher economic value

or re-use potential
• components and associated environmental and economic conse-

quences
‘Apart from the financial losses to waste compliance schemes and
compliant recycling companies, there is a massive impact on the
environment which cannot be ignored,’ says EERA. ‘To give just one
example, the scavenging level of compressors is very concerning
due to the release of ozone depleting gasses contained in the
refrigeration circuit into the environment. According to our
research, this would equal 3.6 million tonnes of CO2 equivalent, or
the annual emissions of two million cars.’
The organisation points out that scavenging of components is out-
side the control of legitimate recyclers but seriously affects their
profitability and competitiveness when bidding for recycling ten-
ders.
The report makes the following recommendations:
• Make EN 50625-4 on collection and logistics mandatory in all

new additives offer recycling boost for
pp and pe
a major challenge for plastics recyclers – the degradation of prod-
ucts during their lifetimes – could be overcome thanks to new
research by German scientists. Plastics are typically subjected to ther-
mal oxidation and photo-oxidation during use, often causing enough
damage to prevent them being recycled into high-quality products.
However, adding new stabilisers has improved the properties of poly-
olefin recyclates, especially those made of polypropylene (PP) and
polyethylene (PE). The stabilisers are said to be capable of reducing
the effects of previous damage to such an extent that recycled mate-
rials can be processed into sophisticated moulded products.
The Fraunhofer Institute for Structural Durability and System
Reliability in Darmstadt has undertaken joint research with special-
ists at L. Brüggemann, based in Heillbron, which manufactures high-
performance additives for engineering.
Fraunhofer says the new stabiliser systems have the potential to pave
the way for the production of recyclates with processing properties
and long-term heat stability similar to those of virgin material.
Brüggemann will adapt the stabilisers to the requirements of custom-
ers and markets, provide technical application advice and take over
large-scale production, quality assurance and worldwide marketing.
‘With its many years of comprehensive experience in the field of
polymer additives and its worldwide market penetration,
Brüggemann is the right partner to bring our ideas for the upcy-
cling of plastics to market quickly,’ says Dr Rudolf Pfaendner, head
of the plastics division at Fraunhofer.
Brüggemann’s polymer specialist Dr Klaus Bergmann adds: ‘Our
goal is to significantly improve the quality of recyclates with the
help of innovative additives to make an important contribution to
the upcycling of plastic waste.’

airline proves recycled plastic can fix
aircraft
Klm royal dutch airlines has started recycling plastic bottles into
tools used to repair its aircraft.
Empty bottles are collected at the end of every flight and trans-
formed into filament, the material used in 3D printers. Previously,
KLM purchased 3D filament from external suppliers. Now, by pro-
cessing tonnes of used polyethylene (PET) bottles at Schiphol
Airport in Amsterdam, KLM saves money while reducing its waste.
The engineering & maintenance department uses around 1.5 kg of
high quality filament every day. Because KLM now supplies PET
bottles as a raw material, the cost of this filament has dropped from
EUR 60 per kg to just EUR 17 per kg.
KLM’s project partners are recycling firm Morssinkhof Rymoplast
and the filament manufacturer Reflow.
The airline aims to reduce the volume of its waste by 50% by 2030
compared to 2011 levels. In 2018, KLM reduced waste by 9% and
28% of remaining waste was recycled, says Ton Dortmans, executive
vice president of KLM’s engineering & maintenance department.
‘We are continuously investing in sustainable and innovative prod-
ucts and processes for our customers, society and our own employ-
ees. It’s terrific to see how we are able to make useful products
from waste materials.’