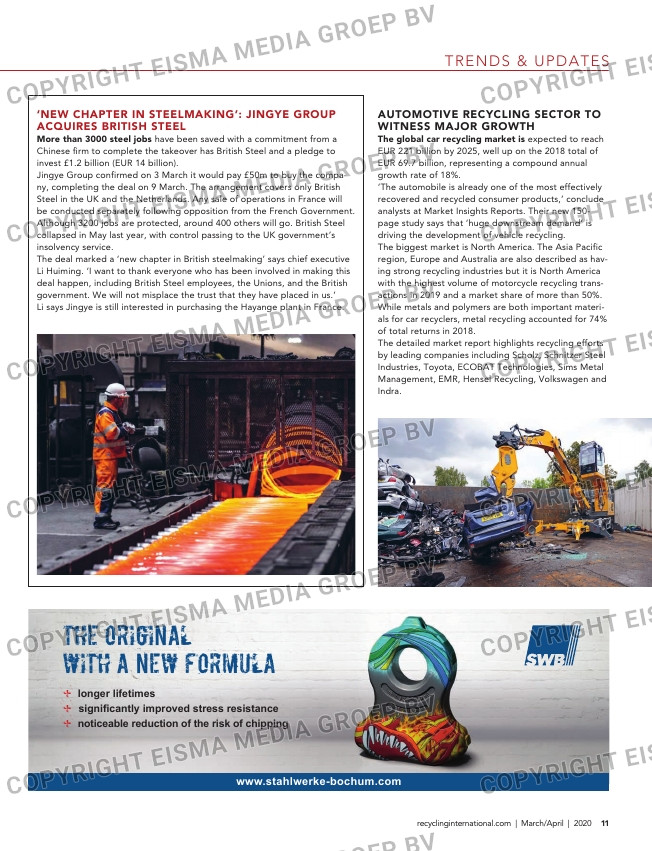 ‘NEW CHAPTER IN STEELMAKING’: JINGYE GROUP
ACQUIRES BRITISH STEEL
More than 3000 steel jobs have been saved with a commitment from a
Chinese firm to complete the takeover has British Steel and a pledge to
invest £1.2 billion (EUR 14 billion).
Jingye Group confirmed on 3 March it would pay £50m to buy the compa-
ny, completing the deal on 9 March. The arrangement covers only British
Steel in the UK and the Netherlands. Any sale of operations in France will
be conducted separately following opposition from the French Government.
Although 3200 jobs are protected, around 400 others will go. British Steel
collapsed in May last year, with control passing to the UK government’s
insolvency service.
The deal marked a ‘new chapter in British steelmaking’ says chief executive
Li Huiming. ‘I want to thank everyone who has been involved in making this
deal happen, including British Steel employees, the Unions, and the British
government. We will not misplace the trust that they have placed in us.’
Li says Jingye is still interested in purchasing the Hayange plant in France.

AUTOMOTIVE RECYCLING SECTOR TO
WITNESS MAJOR GROWTH
The global car recycling market is expected to reach
EUR 221 billion by 2025, well up on the 2018 total of
EUR 69.7 billion, representing a compound annual
growth rate of 18%.
‘The automobile is already one of the most effectively
recovered and recycled consumer products,’ conclude
analysts at Market Insights Reports. Their new 150-
page study says that ‘huge downstream demand’ is
driving the development of vehicle recycling.
The biggest market is North America. The Asia Pacific
region, Europe and Australia are also described as hav-
ing strong recycling industries but it is North America
with the highest volume of motorcycle recycling trans-
actions in 2019 and a market share of more than 50%.
While metals and polymers are both important materi-
als for car recyclers, metal recycling accounted for 74%
of total returns in 2018.
The detailed market report highlights recycling efforts
by leading companies including Scholz, Schnitzer Steel
Industries, Toyota, ECOBAT Technologies, Sims Metal
Management, EMR, Hensel Recycling, Volkswagen and
Indra.