Subscribe
10 Can you really recycle this? Lawsuit looms over Big Plastics The Earth Island Institute has filed a first-of-its- kind lawsuit against 10 companies – including giants like Coca-Cola, PepsiCo, and Nestlé – for creating uns...
Read the entire page 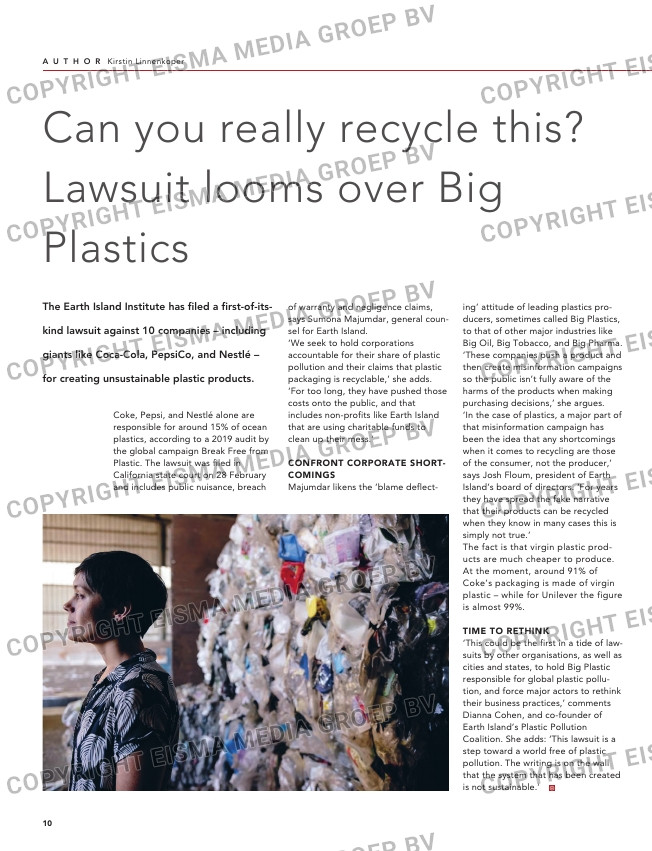 Can you really recycle this?

Plastics
The Earth Island Institute has filed a first-of-its-

kind lawsuit against 10 companies – including

Coke, Pepsi, and Nestlé alone are
responsible for around 15% of ocean
plastics, according to a 2019 audit by
the global campaign Break Free from
Plastic. The lawsuit was filed in
California state court on 28 February
and includes public nuisance, breach

of warranty and negligence claims,
says Sumona Majumdar, general coun-
sel for Earth Island.
‘We seek to hold corporations
accountable for their share of plastic
pollution and their claims that plastic
packaging is recyclable,’ she adds.
‘For too long, they have pushed those
costs onto the public, and that
includes non-profits like Earth Island
that are using charitable funds to
clean up their mess.’

ing’ attitude of leading plastics pro-
ducers, sometimes called Big Plastics,
to that of other major industries like
Big Oil, Big Tobacco, and Big Pharma.
‘These companies push a product and
then create misinformation campaigns
so the public isn’t fully aware of the
harms of the products when making
purchasing decisions,’ she argues.
‘In the case of plastics, a major part of
that misinformation campaign has
been the idea that any shortcomings
when it comes to recycling are those
of the consumer, not the producer,’
says Josh Floum, president of Earth
Island’s board of directors. ‘For years
they have spread the fake narrative
that their products can be recycled
when they know in many cases this is
simply not true.’
The fact is that virgin plastic prod-
ucts are much cheaper to produce.
At the moment, around 91% of
Coke’s packaging is made of virgin
plastic – while for Unilever the figure
is almost 99%.

TIME TO RETHINK
‘This could be the first in a tide of law-
suits by other organisations, as well as
cities and states, to hold Big Plastic
responsible for global plastic pollu-
tion, and force major actors to rethink
their business practices,’ comments
Dianna Cohen, and co-founder of
Earth Island’s Plastic Pollution
Coalition. She adds: ‘This lawsuit is a
step toward a world free of plastic
pollution. The writing is on the wall
that the system that has been created
is not sustainable.’