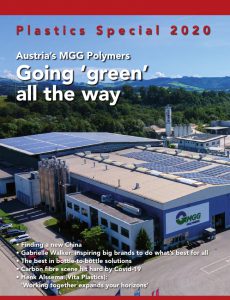 Download edition as PDF
Subscribe
56 Chinese investment A plastics facility in the northern English city of Leeds is almost certainly the UK’s first Chinese- owned recycling operation. the manufacturer and cost were the main reasons that OSO Polymers brought over ...
Read the entire page 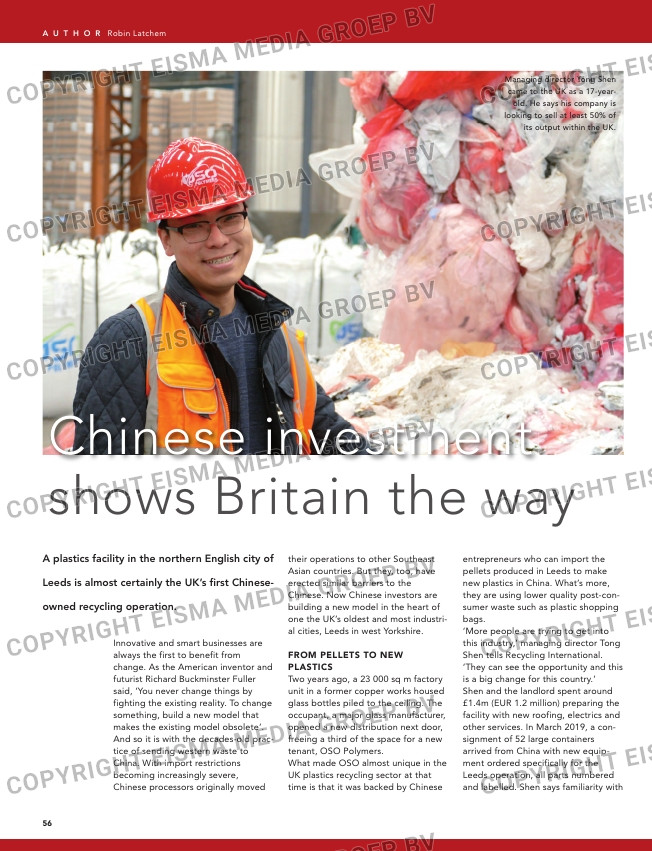 A plastics facility in the northern English city of

the manufacturer and cost were the
main reasons that OSO Polymers
brought over Chinese plant.

HIGH QUALITY, LESS COSTS
‘We’d compared European manufac-
turers with the Chinese one and the
Chinese was more cost-effective. We
also know it better and the machines
and technology being used at the
moment have been proven for the last
five to 10 years. We haven’t seen that
many Western manufacturers upgrad-
ing for film reprocessing and Chinese
manufacturers are catching up very
fast at the moment. The quality and
technology are of the same level com-
pared to European machinery whilst
we can also enjoy the cost-saving
advantage, so both contributed to our
final decision.’
The managing director is coy about
saying too much about the specifics of
the processing line for commercial
reasons but the seven or so elements
from the initial shearing through flota-
tion to the final pelletising would be
known to any processor of plastic
scrap.

PROCESSING AT HOME
The lines produce 450 to 500 tonnes a
month, operated by eight people on
12-hour shifts to ensure a 24-hour,
seven-day-a-week operation. Two to
three days a month are needed for
maintenance but the lines have dou-
ble units to reduce the impact of shut-
ting down.
‘All the raw materials for China come
from Europe or the US so it makes
sense for us to do the processing
here. We want to have at least 50% of
our products sold into the UK market
and as much as possible: the UK’s
closed loop recycling solution. All of
the UK’s waste has to find a new
home and, at the moment, other
countries don’t have the infrastructure
that China has built up for the last 20
years.’
The use of single-use plastic bags as
feedstock inevitably throws up ques-
tions around quality. Shen acknowl-
edges that contamination is always
a challenge because there are no
formal standards and the quality

Innovative and smart businesses are
always the first to benefit from
change. As the American inventor and
futurist Richard Buckminster Fuller
said, ‘You never change things by
fighting the existing reality. To change
something, build a new model that
makes the existing model obsolete’.
And so it is with the decades-old prac-
tice of sending western waste to
China. With import restrictions
becoming increasingly severe,
Chinese processors originally moved

their operations to other Southeast
Asian countries. But they, too, have
erected similar barriers to the
Chinese. Now Chinese investors are
building a new model in the heart of
one the UK’s oldest and most industri-
al cities, Leeds in west Yorkshire.

FROM PELLETS TO NEW
PLASTICS
Two years ago, a 23 000 sq m factory
unit in a former copper works housed
glass bottles piled to the ceiling. The
occupant, a major glass manufacturer,
opened a new distribution next door,
freeing a third of the space for a new
tenant, OSO Polymers.
What made OSO almost unique in the
UK plastics recycling sector at that
time is that it was backed by Chinese

entrepreneurs who can import the
pellets produced in Leeds to make
new plastics in China. What’s more,
they are using lower quality post-con-
sumer waste such as plastic shopping
bags.
‘More people are trying to get into
this industry,’ managing director Tong
Shen tells Recycling International.
‘They can see the opportunity and this
is a big change for this country.’
Shen and the landlord spent around
£1.4m (EUR 1.2 million) preparing the
facility with new roofing, electrics and
other services. In March 2019, a con-
signment of 52 large containers
arrived from China with new equip-
ment ordered specifically for the
Leeds operation, all parts numbered
and labelled. Shen says familiarity with

old. He says his company is
looking to sell at least 50% of

its output within the UK.