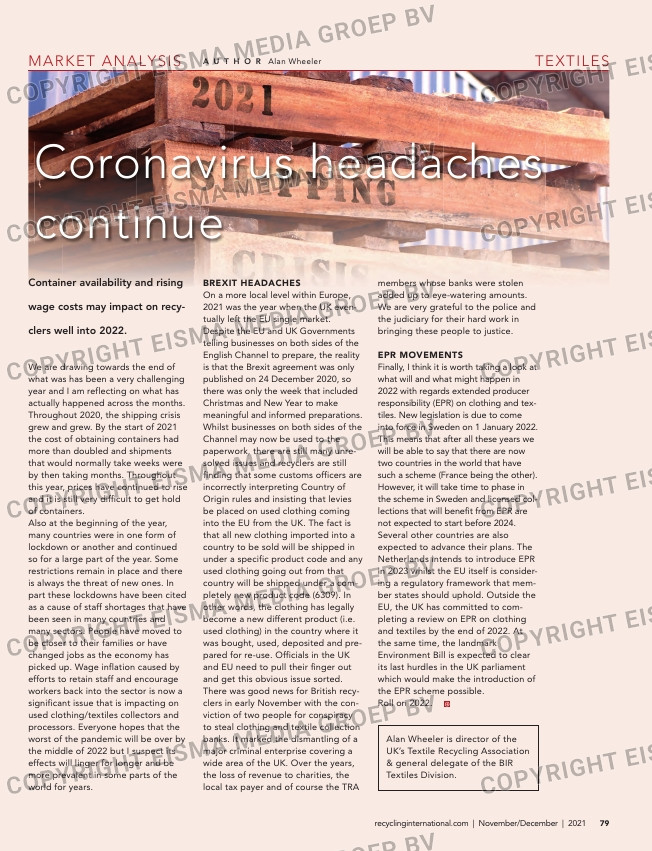 wage costs may impact on recy-

We are drawing towards the end of
what was has been a very challenging
year and I am reflecting on what has
actually happened across the months.
Throughout 2020, the shipping crisis
grew and grew. By the start of 2021
the cost of obtaining containers had
more than doubled and shipments
that would normally take weeks were
by then taking months. Throughout
this year, prices have continued to rise
and it is still very difficult to get hold
of containers.
Also at the beginning of the year,
many countries were in one form of
lockdown or another and continued
so for a large part of the year. Some
restrictions remain in place and there
is always the threat of new ones. In
part these lockdowns have been cited
as a cause of staff shortages that have
been seen in many countries and
many sectors. People have moved to
be closer to their families or have
changed jobs as the economy has
picked up. Wage inflation caused by
efforts to retain staff and encourage
workers back into the sector is now a
significant issue that is impacting on
used clothing/textiles collectors and
processors. Everyone hopes that the
worst of the pandemic will be over by
the middle of 2022 but I suspect its
effects will linger for longer and be
more prevalent in some parts of the
world for years.

BREXIT HEADACHES
On a more local level within Europe,
2021 was the year when the UK even-
tually left the EU single market.
Despite the EU and UK Governments
telling businesses on both sides of the
English Channel to prepare, the reality
is that the Brexit agreement was only
published on 24 December 2020, so
there was only the week that included
Christmas and New Year to make
meaningful and informed preparations.
Whilst businesses on both sides of the
Channel may now be used to the
paperwork, there are still many unre-
solved issues and recyclers are still
finding that some customs officers are
incorrectly interpreting Country of
Origin rules and insisting that levies
be placed on used clothing coming
into the EU from the UK. The fact is
that all new clothing imported into a
country to be sold will be shipped in
under a specific product code and any
used clothing going out from that
country will be shipped under a com-
pletely new product code (6309). In
other words, the clothing has legally
become a new different product (i.e.
used clothing) in the country where it
was bought, used, deposited and pre-
pared for re-use. Officials in the UK
and EU need to pull their finger out
and get this obvious issue sorted.
There was good news for British recy-
clers in early November with the con-
viction of two people for conspiracy
to steal clothing and textile collection
banks. It marked the dismantling of a
major criminal enterprise covering a
wide area of the UK. Over the years,
the loss of revenue to charities, the
local tax payer and of course the TRA

members whose banks were stolen
added up to eye-watering amounts.
We are very grateful to the police and
the judiciary for their hard work in
bringing these people to justice.

EPR MOVEMENTS
Finally, I think it is worth taking a look at
what will and what might happen in
2022 with regards extended producer
responsibility (EPR) on clothing and tex-
tiles. New legislation is due to come
into force in Sweden on 1 January 2022.
This means that after all these years we
will be able to say that there are now
two countries in the world that have
such a scheme (France being the other).
However, it will take time to phase in
the scheme in Sweden and licensed col-
lections that will benefit from EPR are
not expected to start before 2024.
Several other countries are also
expected to advance their plans. The
Netherlands intends to introduce EPR
in 2023 whilst the EU itself is consider-
ing a regulatory framework that mem-
ber states should uphold. Outside the
EU, the UK has committed to com-
pleting a review on EPR on clothing
and textiles by the end of 2022. At
the same time, the landmark
Environment Bill is expected to clear
its last hurdles in the UK parliament
which would make the introduction of
the EPR scheme possible.
Roll on 2022.