Subscribe
ferrous 67recyclinginternational.com | November/December | 2021 come reversal in the trend of the pre- vious three months of decline. After the US$ 466 per tonne recorded in August, the same cargoes in September declined further to...
Read the entire page 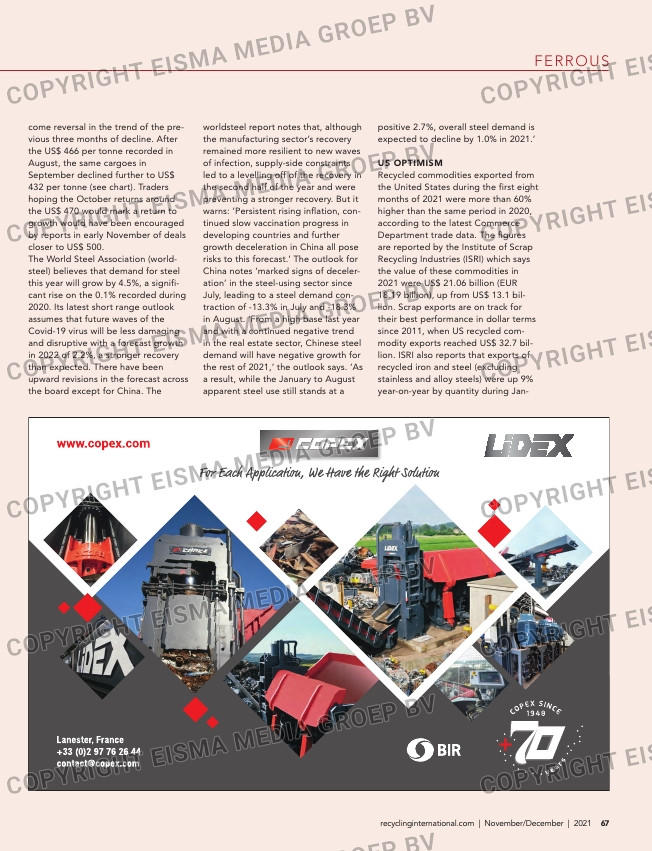 come reversal in the trend of the pre-
vious three months of decline. After
the US$ 466 per tonne recorded in
August, the same cargoes in
September declined further to US$
432 per tonne (see chart). Traders
hoping the October returns around
the US$ 470 would mark a return to
growth would have been encouraged
by reports in early November of deals
closer to US$ 500.
The World Steel Association (world-
steel) believes that demand for steel
this year will grow by 4.5%, a signifi-
cant rise on the 0.1% recorded during
2020. Its latest short range outlook
assumes that future waves of the
Covid-19 virus will be less damaging
and disruptive with a forecast growth
in 2022 of 2.2%, a stronger recovery
than expected. There have been
upward revisions in the forecast across
the board except for China. The

worldsteel report notes that, although
the manufacturing sector’s recovery
remained more resilient to new waves
of infection, supply-side constraints
led to a levelling off of the recovery in
the second half of the year and were
preventing a stronger recovery. But it
warns: ‘Persistent rising inflation, con-
tinued slow vaccination progress in
developing countries and further
growth deceleration in China all pose
risks to this forecast.’ The outlook for
China notes ‘marked signs of deceler-
ation’ in the steel-using sector since
July, leading to a steel demand con-
traction of -13.3% in July and -18.3%
in August. ‘From a high base last year
and with a continued negative trend
in the real estate sector, Chinese steel
demand will have negative growth for
the rest of 2021,’ the outlook says. ‘As
a result, while the January to August
apparent steel use still stands at a

US OPTIMISM
Recycled commodities exported from
the United States during the first eight
months of 2021 were more than 60%
higher than the same period in 2020,
according to the latest Commerce
Department trade data. The figures
are reported by the Institute of Scrap
Recycling Industries (ISRI) which says
the value of these commodities in
2021 were US$ 21.06 billion (EUR
18.19 billion), up from US$ 13.1 bil-
lion. Scrap exports are on track for
their best performance in dollar terms
since 2011, when US recycled com-
modity exports reached US$ 32.7 bil-
lion. ISRI also reports that exports of
recycled iron and steel (excluding
stainless and alloy steels) were up 9%
year-on-year by quantity during Jan-