Subscribe
Plastics sPecial 49recyclinginternational.com | November/December | 2021 Fotobijschrift KaderKop ?? Is recycling plastics a waste of time? We typically look to our political leaders for reassurance and guidance on sustainabili...
Read the entire page 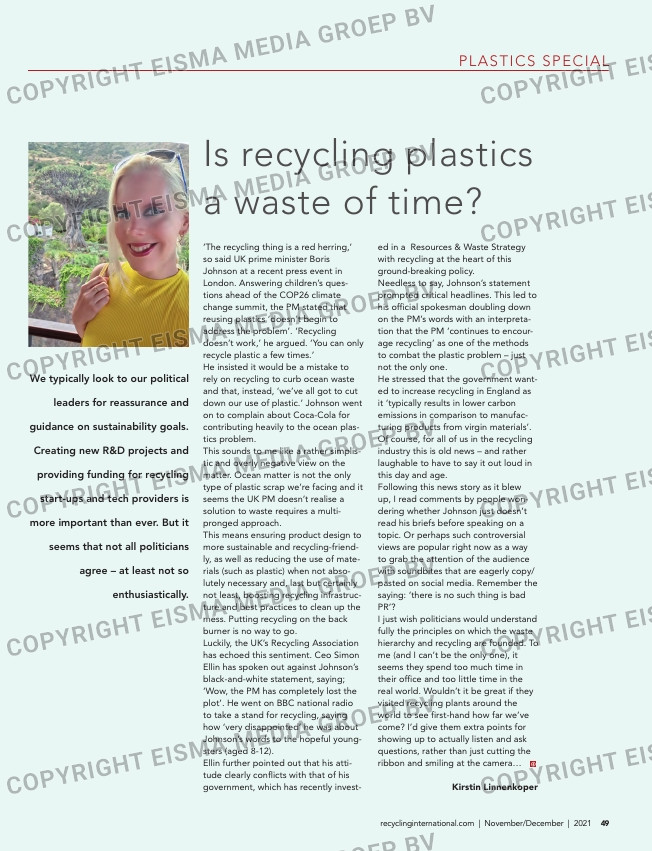 Is recycling plastics
a waste of time?

We typically look to our political

leaders for reassurance and

start-ups and tech providers is

more important than ever. But it

seems that not all politicians

agree – at least not so

‘The recycling thing is a red herring,’
so said UK prime minister Boris
Johnson at a recent press event in
London. Answering children’s ques-
tions ahead of the COP26 climate
change summit, the PM stated that
reusing plastics ‘doesn’t begin to
address the problem’. ‘Recycling
doesn’t work,’ he argued. ‘You can only
recycle plastic a few times.’
He insisted it would be a mistake to
rely on recycling to curb ocean waste
and that, instead, ‘we’ve all got to cut
down our use of plastic.’ Johnson went
on to complain about Coca-Cola for
contributing heavily to the ocean plas-
tics problem.
This sounds to me like a rather simplis-
tic and overly negative view on the
matter. Ocean matter is not the only
type of plastic scrap we’re facing and it
seems the UK PM doesn’t realise a
solution to waste requires a multi-
pronged approach.
This means ensuring product design to
more sustainable and recycling-friend-
ly, as well as reducing the use of mate-
rials (such as plastic) when not abso-
lutely necessary and, last but certainly
not least, boosting recycling infrastruc-
ture and best practices to clean up the
mess. Putting recycling on the back
burner is no way to go.
Luckily, the UK’s Recycling Association
has echoed this sentiment. Ceo Simon
Ellin has spoken out against Johnson’s
black-and-white statement, saying;
‘Wow, the PM has completely lost the
plot’. He went on BBC national radio
to take a stand for recycling, saying
how ‘very disappointed’ he was about
Johnson’s words to the hopeful young-
sters (aged 8-12).
Ellin further pointed out that his atti-
tude clearly conflicts with that of his
government, which has recently invest-

ed in a Resources & Waste Strategy
with recycling at the heart of this
ground-breaking policy.
Needless to say, Johnson’s statement
prompted critical headlines. This led to
his official spokesman doubling down
on the PM’s words with an interpreta-
tion that the PM ‘continues to encour-
age recycling’ as one of the methods
to combat the plastic problem – just
not the only one.
He stressed that the government want-
ed to increase recycling in England as
it ‘typically results in lower carbon
emissions in comparison to manufac-
turing products from virgin materials’.
Of course, for all of us in the recycling
industry this is old news – and rather
laughable to have to say it out loud in
this day and age.
Following this news story as it blew
up, I read comments by people won-
dering whether Johnson just doesn’t
read his briefs before speaking on a
topic. Or perhaps such controversial
views are popular right now as a way
to grab the attention of the audience
with soundbites that are eagerly copy/
pasted on social media. Remember the
saying: ‘there is no such thing is bad
PR’?
I just wish politicians would understand
fully the principles on which the waste
hierarchy and recycling are founded. To
me (and I can’t be the only one), it
seems they spend too much time in
their office and too little time in the
real world. Wouldn’t it be great if they
visited recycling plants around the
world to see first-hand how far we’ve
come? I’d give them extra points for
showing up to actually listen and ask
questions, rather than just cutting the
ribbon and smiling at the camera…