Subscribe
TRADE SHOW 41recyclinginternational.com | November/December | 2021 The young women add that the tech world is no longer an industry exclu- sively for men. ‘As a next generation company, with most of our team fresh out of college,...
Read the entire page 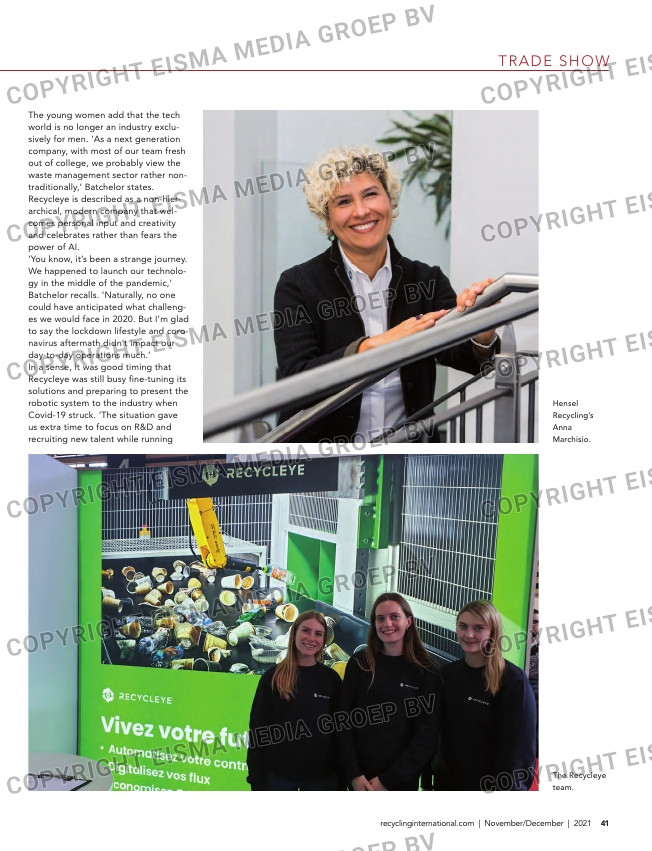 The young women add that the tech
world is no longer an industry exclu-
sively for men. ‘As a next generation
company, with most of our team fresh
out of college, we probably view the
waste management sector rather non-
traditionally,’ Batchelor states.
Recycleye is described as a non-hier-
archical, modern company that wel-
comes personal input and creativity
and celebrates rather than fears the
power of AI.
‘You know, it’s been a strange journey.
We happened to launch our technolo-
gy in the middle of the pandemic,’
Batchelor recalls. ‘Naturally, no one
could have anticipated what challeng-
es we would face in 2020. But I’m glad
to say the lockdown lifestyle and coro-
navirus aftermath didn’t impact our
day-to-day operations much.’
In a sense, it was good timing that
Recycleye was still busy fine-tuning its
solutions and preparing to present the
robotic system to the industry when
Covid-19 struck. ‘The situation gave
us extra time to focus on R&D and
recruiting new talent while running

advantage.’ Indeed, the 28 year-old
businessman (who was named in
Forbes’ annual 30 Under 30 list for
Social Impact) is immersed in conver-
sation with a group of keenly interest-
ed French recyclers as our team
arrives at the booth.
DeWulf created the first version of
Recycleye’s sorting algorithm himself.
With the help of several UK universi-
ties, he established WasteNet, which
is based on the self-learning principle.
This open-source waste database is
currently one of the world’s largest,
containing more than 2.5 million
images of materials of all shapes and
sizes.

Making sMart Decisions
Having a young team (most of those
employed at Recycleye are in their
mid-twenties) with an open-minded
and enthusiastic approach to foreign
markets, has proved successful so far.
Since appearing on the scene in 2020,
the company has managed to:
• develop its custom Recycleye

nologists
A popular system configuration, which
is capable of 55 picks per minute, is to
have an AI-driven waste detection
device at both the end and the front
of a line. This allows the operator to
safeguard the quality of the sorted
fractions when the input volume
increases. The MAX AI demonstration
unit had the same set-up, enabling
the robot to make smart, strategic
decisions in every unique situation.
‘As we like to say: “Waste doesn’t
exist, it’s only materials in the wrong
place”,’ Batchelor asserts after she
poses for photos with her colleagues
Zoe, Isabelle and Jenny. That practical
message resonates with the all-female
expo team. ‘You read so many head-
lines about waste being a problem but
let’s instead focus on how we can fix
it,’ they suggest.