Subscribe
BUSINESS 35recyclinginternational.com | November/December | 2021 inspired Garg to set up a similar facili- ty in India. B Lal Steel is located outside Ludhiana, a major industrial city 300 km north of Delhi. It is close to Mandi Go...
Read the entire page 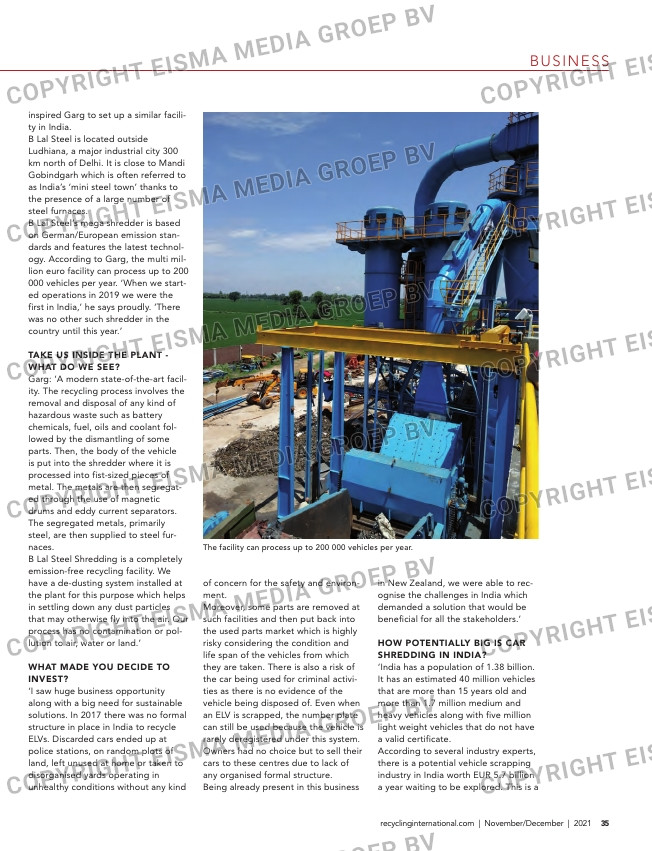 inspired Garg to set up a similar facili-
ty in India.
B Lal Steel is located outside
Ludhiana, a major industrial city 300
km north of Delhi. It is close to Mandi
Gobindgarh which is often referred to
as India’s ‘mini steel town’ thanks to
the presence of a large number of
steel furnaces.
B Lal Steel’s mega shredder is based
on German/European emission stan-
dards and features the latest technol-
ogy. According to Garg, the multi mil-
lion euro facility can process up to 200
000 vehicles per year. ‘When we start-
ed operations in 2019 we were the
first in India,’ he says proudly. ‘There
was no other such shredder in the
country until this year.’

TAKE US INSIDE THE PLANT –
WHAT DO WE SEE?
Garg: ‘A modern state-of-the-art facil-
ity. The recycling process involves the
removal and disposal of any kind of
hazardous waste such as battery
chemicals, fuel, oils and coolant fol-
lowed by the dismantling of some
parts. Then, the body of the vehicle
is put into the shredder where it is
processed into fist-sized pieces of
metal. The metals are then segregat-
ed through the use of magnetic
drums and eddy current separators.
The segregated metals, primarily
steel, are then supplied to steel fur-
naces.
B Lal Steel Shredding is a completely
emission-free recycling facility. We
have a de-dusting system installed at
the plant for this purpose which helps
in settling down any dust particles
that may otherwise fly into the air. Our
process has no contamination or pol-
lution to air, water or land.’

WHAT MADE YOU DECIDE TO
INVEST?
‘I saw huge business opportunity
along with a big need for sustainable
solutions. In 2017 there was no formal
structure in place in India to recycle
ELVs. Discarded cars ended up at
police stations, on random plots of
land, left unused at home or taken to
disorganised yards operating in
unhealthy conditions without any kind

of concern for the safety and environ-
ment.
Moreover, some parts are removed at
such facilities and then put back into
the used parts market which is highly
risky considering the condition and
life span of the vehicles from which
they are taken. There is also a risk of
the car being used for criminal activi-
ties as there is no evidence of the
vehicle being disposed of. Even when
an ELV is scrapped, the number plate
can still be used because the vehicle is
rarely deregistered under this system.
Owners had no choice but to sell their
cars to these centres due to lack of
any organised formal structure.
Being already present in this business

in New Zealand, we were able to rec-
ognise the challenges in India which
demanded a solution that would be
beneficial for all the stakeholders.’

HOW POTENTIALLY BIG IS CAR
SHREDDING IN INDIA?
‘India has a population of 1.38 billion.
It has an estimated 40 million vehicles
that are more than 15 years old and
more than 1.7 million medium and
heavy vehicles along with five million
light weight vehicles that do not have
a valid certificate.
According to several industry experts,
there is a potential vehicle scrapping
industry in India worth EUR 5.7 billion
a year waiting to be explored. This is a

The facility can process up to 200 000 vehicles per year.