Subscribe
market analysis Prices level off after Covid-19 surge Supply and demand changes during the pan- demic send the recovered paper sector on a rollercoaster ride. After reaching their highest levels in almost three years in early May, No...
Read the entire page 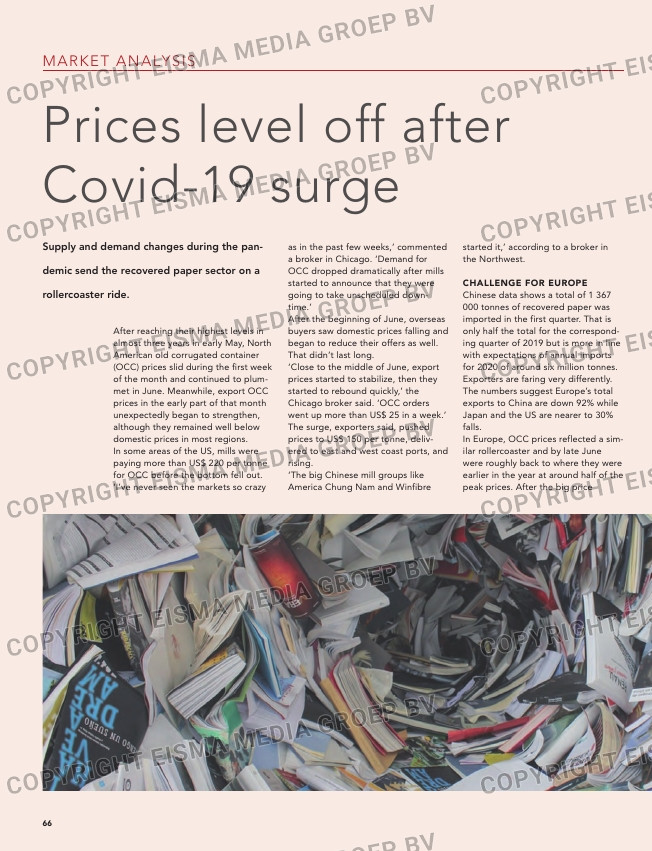 demic send the recovered paper sector on a

After reaching their highest levels in
almost three years in early May, North
American old corrugated container
(OCC) prices slid during the first week
of the month and continued to plum-
met in June. Meanwhile, export OCC
prices in the early part of that month
unexpectedly began to strengthen,
although they remained well below
domestic prices in most regions.
In some areas of the US, mills were
paying more than US$ 220 per tonne
for OCC before the bottom fell out.
‘I’ve never seen the markets so crazy

started it,’ according to a broker in
the Northwest.

CHALLENGE FOR EUROPE
Chinese data shows a total of 1 367
000 tonnes of recovered paper was
imported in the first quarter. That is
only half the total for the correspond-
ing quarter of 2019 but is more in line
with expectations of annual imports
for 2020 of around six million tonnes.
Exporters are faring very differently.
The numbers suggest Europe’s total
exports to China are down 92% while
Japan and the US are nearer to 30%
falls.
In Europe, OCC prices reflected a sim-
ilar rollercoaster and by late June
were roughly back to where they were
earlier in the year at around half of the
peak prices. After the big price

as in the past few weeks,’ commented
a broker in Chicago. ‘Demand for
OCC dropped dramatically after mills
started to announce that they were
going to take unscheduled down-
time.’
After the beginning of June, overseas
buyers saw domestic prices falling and
began to reduce their offers as well.
That didn’t last long.
‘Close to the middle of June, export
prices started to stabilize, then they
started to rebound quickly,’ the
Chicago broker said. ‘OCC orders
went up more than US$ 25 in a week.’
The surge, exporters said, pushed
prices to US$ 150 per tonne, deliv-
ered to east and west coast ports, and
rising.
‘The big Chinese mill groups like
America Chung Nam and Winfibre

increase for all grades in April and
May, the market has suddenly turned
around. OCC price dropped in June
by about US$ 90 per tonne while
other grades such news and pams
were down by about US$ 75 per
tonnes. Mills have been struggling to
sell their finished products so many in
both Europe and Asia have been tak-
ing downtime. It means we will see
very weak demand in July so it is likely
that prices will drop yet further.

INDONESIA’S CONTAMINATION
PLAN
Indian mills have been experiencing
difficulties starting up again as it has
been difficult to get people back to
work. On a brighter note, most of the
containers that have been standing at
the dock in Indian ports for up to two
months have now been collected.
Demand remains low in India with
Vietnam being the only country buy-
ing in anything like a decent volume.
There was better news from Indonesia
with the US Institute of Scrap
Recycling Industries hailing the gov-
ernment’s plan for a 2% contamination
limit for recovered paper imports ‘a
major win for manufacturers, recyclers