Subscribe
COVER STORY 49recyclinginternational.com | July/August | 2020 rare earths. We use a different reagent. It doesn’t come from the mining industry and is environmentally friendly.’ The sustainable reagent allows Geomega to proces...
Read the entire page 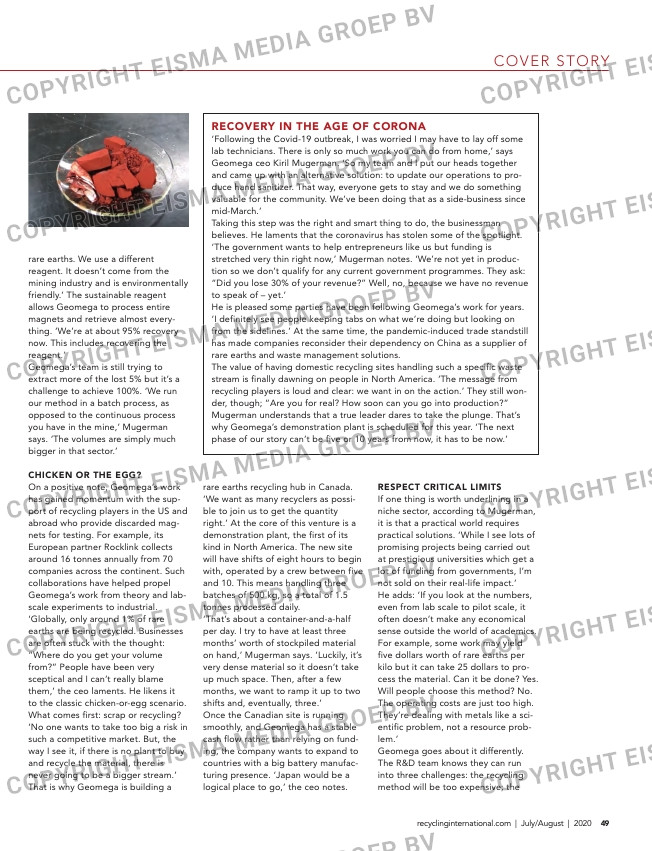 rare earths. We use a different
reagent. It doesn’t come from the
mining industry and is environmentally
friendly.’ The sustainable reagent
allows Geomega to process entire
magnets and retrieve almost every-
thing. ‘We’re at about 95% recovery
now. This includes recovering the
reagent.’
Geomega’s team is still trying to
extract more of the lost 5% but it’s a
challenge to achieve 100%. ‘We run
our method in a batch process, as
opposed to the continuous process
you have in the mine,’ Mugerman
says. ‘The volumes are simply much
bigger in that sector.’

ChiCken or the egg?
On a positive note, Geomega’s work
has gained momentum with the sup-
port of recycling players in the US and
abroad who provide discarded mag-
nets for testing. For example, its
European partner Rocklink collects
around 16 tonnes annually from 70
companies across the continent. Such
collaborations have helped propel
Geomega’s work from theory and lab-
scale experiments to industrial.
‘Globally, only around 1% of rare
earths are being recycled. Businesses
are often stuck with the thought:
“Where do you get your volume
from?” People have been very
sceptical and I can’t really blame
them,’ the ceo laments. He likens it
to the classic chicken-or-egg scenario.
What comes first: scrap or recycling?
‘No one wants to take too big a risk in
such a competitive market. But, the
way I see it, if there is no plant to buy
and recycle the material, there is
never going to be a bigger stream.’
That is why Geomega is building a

rare earths recycling hub in Canada.
‘We want as many recyclers as possi-
ble to join us to get the quantity
right.’ At the core of this venture is a
demonstration plant, the first of its
kind in North America. The new site
will have shifts of eight hours to begin
with, operated by a crew between five
and 10. This means handling three
batches of 500 kg, so a total of 1.5
tonnes processed daily.
‘That’s about a container-and-a-half
per day. I try to have at least three
months’ worth of stockpiled material
on hand,’ Mugerman says. ‘Luckily, it’s
very dense material so it doesn’t take
up much space. Then, after a few
months, we want to ramp it up to two
shifts and, eventually, three.’
Once the Canadian site is running
smoothly, and Geomega has a stable
cash flow rather than relying on fund-
ing, the company wants to expand to
countries with a big battery manufac-
turing presence. ‘Japan would be a
logical place to go,’ the ceo notes.

respeCt CritiCal limits
If one thing is worth underlining in a
niche sector, according to Mugerman,
it is that a practical world requires
practical solutions. ‘While I see lots of
promising projects being carried out
at prestigious universities which get a
lot of funding from governments, I’m
not sold on their real-life impact.’
He adds: ‘If you look at the numbers,
even from lab scale to pilot scale, it
often doesn’t make any economical
sense outside the world of academics.
For example, some work may yield
five dollars worth of rare earths per
kilo but it can take 25 dollars to pro-
cess the material. Can it be done? Yes.
Will people choose this method? No.
The operating costs are just too high.
They’re dealing with metals like a sci-
entific problem, not a resource prob-
lem.’
Geomega goes about it differently.
The R&D team knows they can run
into three challenges: the recycling
method will be too expensive; the

reCovery in the age of Corona
‘Following the Covid-19 outbreak, I was worried I may have to lay off some
lab technicians. There is only so much work you can do from home,’ says
Geomega ceo Kiril Mugerman. ‘So my team and I put our heads together
and came up with an alternative solution: to update our operations to pro-
duce hand sanitizer. That way, everyone gets to stay and we do something
valuable for the community. We’ve been doing that as a side-business since
mid-March.’
Taking this step was the right and smart thing to do, the businessman
believes. He laments that the coronavirus has stolen some of the spotlight.
‘The government wants to help entrepreneurs like us but funding is
stretched very thin right now,’ Mugerman notes. ‘We’re not yet in produc-
tion so we don’t qualify for any current government programmes. They ask:
“Did you lose 30% of your revenue?” Well, no, because we have no revenue
to speak of – yet.’
He is pleased some parties have been following Geomega’s work for years.
‘I definitely see people keeping tabs on what we’re doing but looking on
from the sidelines.’ At the same time, the pandemic-induced trade standstill
has made companies reconsider their dependency on China as a supplier of
rare earths and waste management solutions.
The value of having domestic recycling sites handling such a specific waste
stream is finally dawning on people in North America. ‘The message from
recycling players is loud and clear: we want in on the action.’ They still won-
der, though; “Are you for real? How soon can you go into production?”
Mugerman understands that a true leader dares to take the plunge. That’s
why Geomega’s demonstration plant is scheduled for this year. ‘The next
phase of our story can’t be five or 10 years from now, it has to be now.’