Subscribe
Hägglunds helps Genan extend tyre life and productivity As the number of vehicles around the world rises, so does the challenge of disposing of increasing numbers of end-of- life tyres. Since the early 1990s, Genan has been kee...
Read the entire page 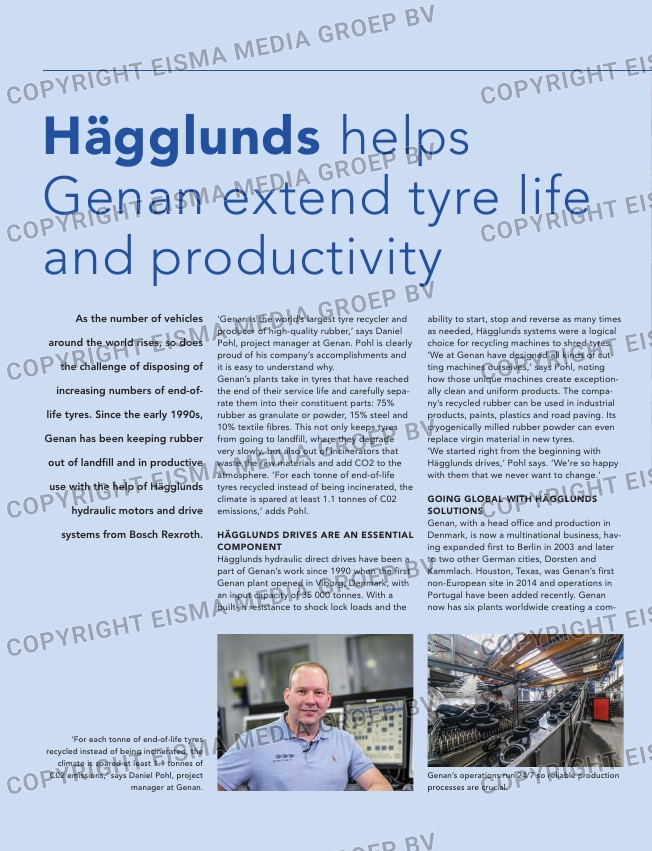 As the number of vehicles

around the world rises, so does

the challenge of disposing of

Genan has been keeping rubber

out of landfill and in productive

use with the help of Hägglunds

‘Genan is the world’s largest tyre recycler and
producer of high-quality rubber,’ says Daniel
Pohl, project manager at Genan. Pohl is clearly
proud of his company’s accomplishments and
it is easy to understand why.
Genan’s plants take in tyres that have reached
the end of their service life and carefully sepa-
rate them into their constituent parts: 75%
rubber as granulate or powder, 15% steel and
10% textile fibres. This not only keeps tyres
from going to landfill, where they degrade
very slowly, but also out of incinerators that
waste the raw materials and add CO2 to the
atmosphere. ‘For each tonne of end-of-life
tyres recycled instead of being incinerated, the
climate is spared at least 1.1 tonnes of C02
emissions,’ adds Pohl.

Hägglunds drives are an essential
component
Hägglunds hydraulic direct drives have been a
part of Genan’s work since 1990 when the first
Genan plant opened in Viborg, Denmark, with
an input capacity of 35 000 tonnes. With a
built-in resistance to shock lock loads and the

ability to start, stop and reverse as many times
as needed, Hägglunds systems were a logical
choice for recycling machines to shred tyres.
‘We at Genan have designed all kinds of cut-
ting machines ourselves,’ says Pohl, noting
how those unique machines create exception-
ally clean and uniform products. The compa-
ny’s recycled rubber can be used in industrial
products, paints, plastics and road paving. Its
cryogenically milled rubber powder can even
replace virgin material in new tyres.
‘We started right from the beginning with
Hägglunds drives,’ Pohl says. ‘We’re so happy
with them that we never want to change.’

going global witH Hägglunds
solutions
Genan, with a head office and production in
Denmark, is now a multinational business, hav-
ing expanded first to Berlin in 2003 and later
to two other German cities, Dorsten and
Kammlach. Houston, Texas, was Genan’s first
non-European site in 2014 and operations in
Portugal have been added recently. Genan
now has six plants worldwide creating a com-

bined intake capacity of nearly 400 000 tonnes
per year.
Hägglunds motors and drive systems, which
remain integral to Genan’s business, are used
at all of these sites. The company now has
more than 40 hydraulic drive systems in total,
which are based on two different motors: the
Hägglunds CA 100 and the Hägglunds CB 840.
With their high power density, they deliver
extreme and sustainable torque from zero
speed.
‘The main advantages of the Hägglunds drives
for us are the compact and robust design and
the high torque right from the beginning,’ says
Pohl.

drives and people to rely on
Torque, however, is not the only appeal of
Hägglunds systems. The high reliability of the
drives is also crucial, especially as Genan’s
business is so automated. At a typical plant,
only a handful of staff members supervise the
recycling process with just one maintenance
operative per shift.

‘For each tonne of end-of-life tyres
recycled instead of being incinerated, the

Hägglunds motors and drive systems, integral to Genan’s business, are used at all of the company’s sites.