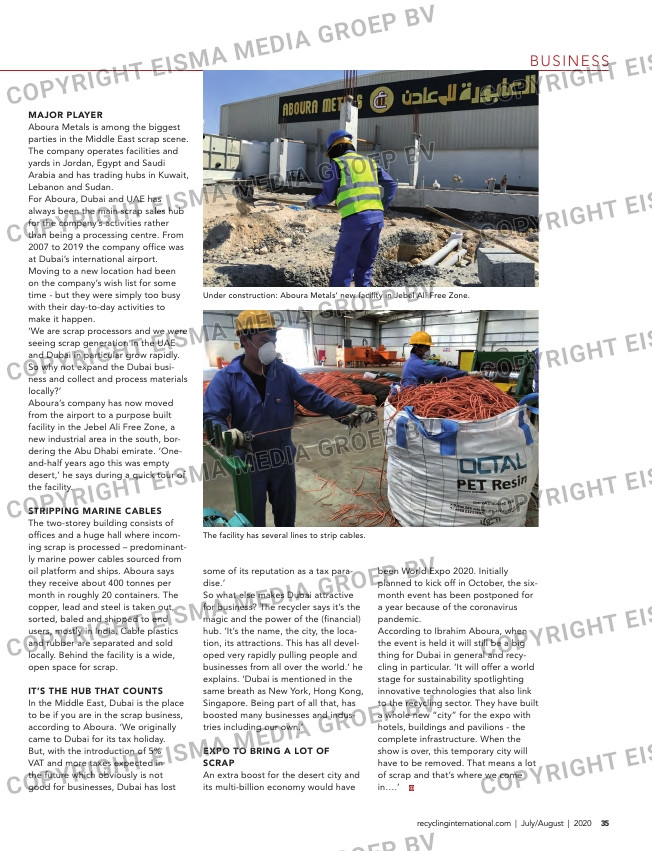 MAJOR PLAYER
Aboura Metals is among the biggest
parties in the Middle East scrap scene.
The company operates facilities and
yards in Jordan, Egypt and Saudi
Arabia and has trading hubs in Kuwait,
Lebanon and Sudan.
For Aboura, Dubai and UAE has
always been the main scrap sales hub
for the company’s activities rather
than being a processing centre. From
2007 to 2019 the company office was
at Dubai’s international airport.
Moving to a new location had been
on the company’s wish list for some
time – but they were simply too busy
with their day-to-day activities to
make it happen.
‘We are scrap processors and we were
seeing scrap generation in the UAE
and Dubai in particular grow rapidly.
So why not expand the Dubai busi-
ness and collect and process materials
locally?’
Aboura’s company has now moved
from the airport to a purpose built
facility in the Jebel Ali Free Zone, a
new industrial area in the south, bor-
dering the Abu Dhabi emirate. ‘One-
and-half years ago this was empty
desert,’ he says during a quick tour of
the facility.

STRIPPING MARINE CABLES
The two-storey building consists of
offices and a huge hall where incom-
ing scrap is processed – predominant-
ly marine power cables sourced from
oil platform and ships. Aboura says
they receive about 400 tonnes per
month in roughly 20 containers. The
copper, lead and steel is taken out,
sorted, baled and shipped to end
users, mostly in India. Cable plastics
and rubber are separated and sold
locally. Behind the facility is a wide,
open space for scrap.

IT’S THE HUB THAT COUNTS
In the Middle East, Dubai is the place
to be if you are in the scrap business,
according to Aboura. ‘We originally
came to Dubai for its tax holiday.
But, with the introduction of 5%
VAT and more taxes expected in
the future which obviously is not
good for businesses, Dubai has lost

some of its reputation as a tax para-
dise.’
So what else makes Dubai attractive
for business? The recycler says it’s the
magic and the power of the (financial)
hub. ‘It’s the name, the city, the loca-
tion, its attractions. This has all devel-
oped very rapidly pulling people and
businesses from all over the world.’ he
explains. ‘Dubai is mentioned in the
same breath as New York, Hong Kong,
Singapore. Being part of all that, has
boosted many businesses and indus-
tries including our own.’

been World Expo 2020. Initially
planned to kick off in October, the six-
month event has been postponed for
a year because of the coronavirus
pandemic.
According to Ibrahim Aboura, when
the event is held it will still be a big
thing for Dubai in general and recy-
cling in particular. ‘It will offer a world
stage for sustainability spotlighting
innovative technologies that also link
to the recycling sector. They have built
a whole new “city” for the expo with
hotels, buildings and pavilions – the
complete infrastructure. When the
show is over, this temporary city will
have to be removed. That means a lot
of scrap and that’s where we come
in….’

The facility has several lines to strip cables.