Subscribe
34 A new home and HQ in Jebel Ali Aboura Meta l s expands i t s act iv i t ies in the sc rap t rade hub of Duba i It should have been a year of celebration at Aboura Metals. The company, with seven yards handling some 150 00...
Read the entire page 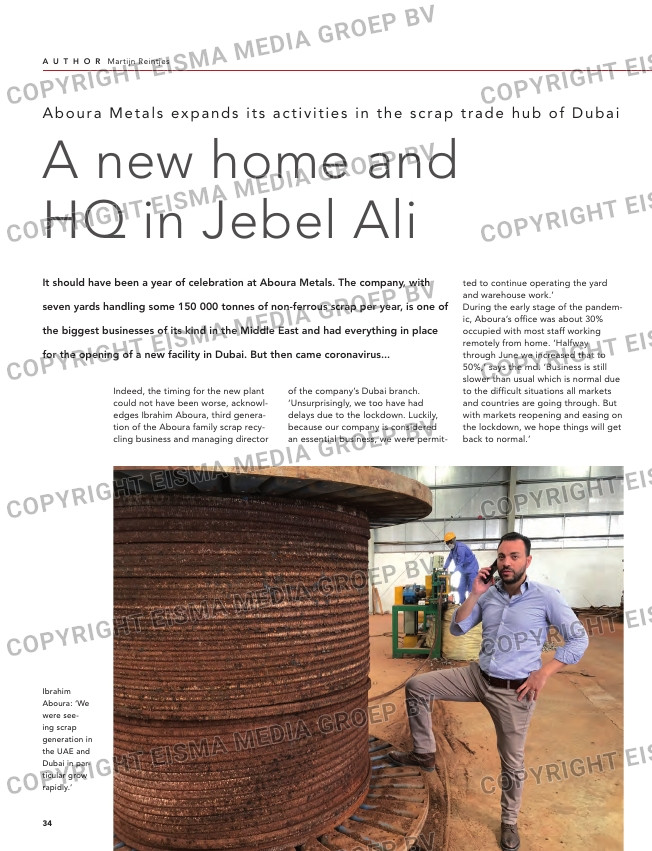 A new home and
HQ in Jebel Ali

It should have been a year of celebration at Aboura Metals. The company, with

seven yards handling some 150 000 tonnes of non-ferrous scrap per year, is one of

for the opening of a new facility in Dubai. But then came coronavirus…

MAJOR PLAYER
Aboura Metals is among the biggest
parties in the Middle East scrap scene.
The company operates facilities and
yards in Jordan, Egypt and Saudi
Arabia and has trading hubs in Kuwait,
Lebanon and Sudan.
For Aboura, Dubai and UAE has
always been the main scrap sales hub
for the company’s activities rather
than being a processing centre. From
2007 to 2019 the company office was
at Dubai’s international airport.
Moving to a new location had been
on the company’s wish list for some
time – but they were simply too busy
with their day-to-day activities to
make it happen.
‘We are scrap processors and we were
seeing scrap generation in the UAE
and Dubai in particular grow rapidly.
So why not expand the Dubai busi-
ness and collect and process materials
locally?’
Aboura’s company has now moved
from the airport to a purpose built
facility in the Jebel Ali Free Zone, a
new industrial area in the south, bor-
dering the Abu Dhabi emirate. ‘One-
and-half years ago this was empty
desert,’ he says during a quick tour of
the facility.

STRIPPING MARINE CABLES
The two-storey building consists of
offices and a huge hall where incom-
ing scrap is processed – predominant-
ly marine power cables sourced from
oil platform and ships. Aboura says
they receive about 400 tonnes per
month in roughly 20 containers. The
copper, lead and steel is taken out,
sorted, baled and shipped to end
users, mostly in India. Cable plastics
and rubber are separated and sold
locally. Behind the facility is a wide,
open space for scrap.

IT’S THE HUB THAT COUNTS
In the Middle East, Dubai is the place
to be if you are in the scrap business,
according to Aboura. ‘We originally
came to Dubai for its tax holiday.
But, with the introduction of 5%
VAT and more taxes expected in
the future which obviously is not
good for businesses, Dubai has lost

Indeed, the timing for the new plant
could not have been worse, acknowl-
edges Ibrahim Aboura, third genera-
tion of the Aboura family scrap recy-
cling business and managing director

of the company’s Dubai branch.
‘Unsurprisingly, we too have had
delays due to the lockdown. Luckily,
because our company is considered
an essential business, we were permit-

ted to continue operating the yard
and warehouse work.’
During the early stage of the pandem-
ic, Aboura’s office was about 30%
occupied with most staff working
remotely from home. ‘Halfway
through June we increased that to
50%,’ says the md. ‘Business is still
slower than usual which is normal due
to the difficult situations all markets
and countries are going through. But
with markets reopening and easing on
the lockdown, we hope things will get
back to normal.’

Ibrahim
Aboura: ‘We
were see-
ing scrap
generation in
the UAE and
Dubai in par-
ticular grow
rapidly.’