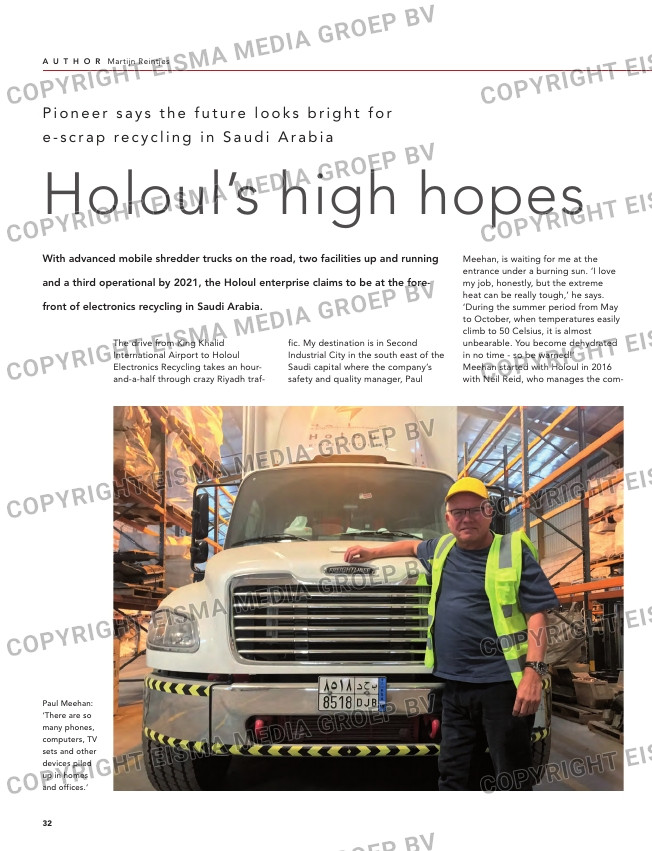 With advanced mobile shredder trucks on the road, two facilities up and running

and a third operational by 2021, the Holoul enterprise claims to be at the fore-

pany’s second plant in Jeddah, and a
group of local investors. Their mission:
to establish a collection and recycling
infrastructure for electronics, some-
thing that was undeveloped in Saudi
Arabia. ‘Neil and I have worked in
e-scrap worldwide for some years,’
says Meehan. ‘We know from experi-
ence what works and what doesn’t. In
Australia, India, South Africa and
other places we have seen how regu-
lation can boost recycling and move
things in the right direction.’

GOING CIRCULAR
The same is now starting to happen in
Saudi Arabia, according to Meehan.
The Kingdom is using its investment
power to create an economy that’s
more diverse, less oil dependant and,
above all, circular. ‘It is all still very
limited but at least the foundations
are being laid for e-scrap regulation,’
he says. ‘Here, too, regulation and
guidance are needed to get things
done. Perhaps even more importantly,
relevant people from the ministry
departments are involved. This will all
be a big driver for recycling in gener-
al, and the Holoul business in particu-
lar.’

E-SCRAP PILING UP
Saudi Arabia (population 35 million)
produced close to an estimated half a
million tonnes of electronic scrap in
2019 and that is growing by 10% a
year. ‘We’ve only just begun,’ Meehan
adds. ‘There are so many phones,
computers, TV sets and other devices

fic. My destination is in Second
Industrial City in the south east of the
Saudi capital where the company’s
safety and quality manager, Paul

Meehan, is waiting for me at the
entrance under a burning sun. ‘I love
my job, honestly, but the extreme
heat can be really tough,’ he says.
‘During the summer period from May
to October, when temperatures easily
climb to 50 Celsius, it is almost
unbearable. You become dehydrated
in no time – so be warned!’
Meehan started with Holoul in 2016
with Neil Reid, who manages the com-

Paul Meehan:
‘There are so
many phones,
computers, TV
sets and other
devices piled
up in homes
and offices.’