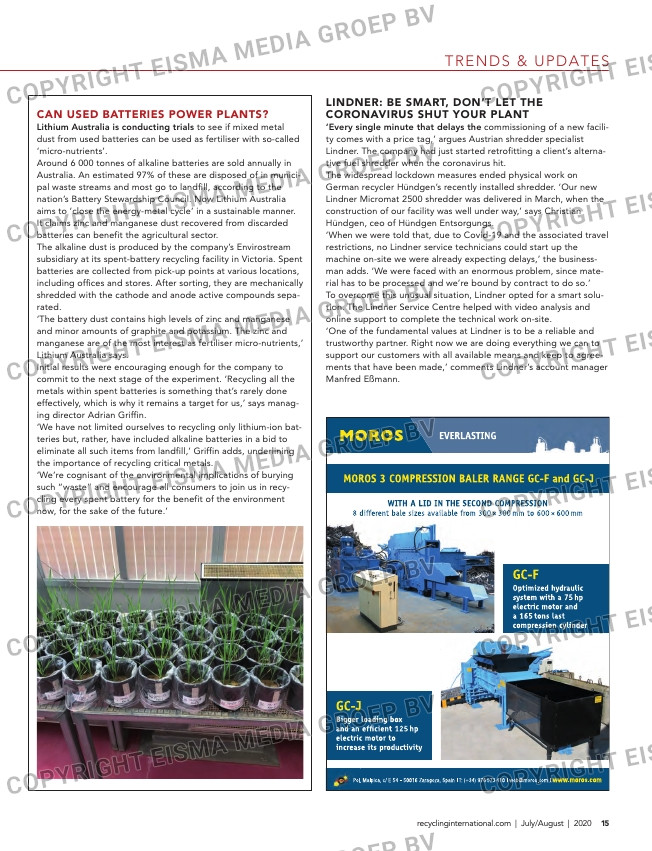 Can used batteries power plants?
Lithium Australia is conducting trials to see if mixed metal
dust from used batteries can be used as fertiliser with so-called
ŌĆśmicro-nutrientsŌĆÖ.
Around 6 000 tonnes of alkaline batteries are sold annually in
Australia. An estimated 97% of these are disposed of in munici-
pal waste streams and most go to landfill, according to the
nationŌĆÖs Battery Stewardship Council. Now Lithium Australia
aims to ŌĆśclose the energy-metal cycleŌĆÖ in a sustainable manner.
It claims zinc and manganese dust recovered from discarded
batteries can benefit the agricultural sector.
The alkaline dust is produced by the companyŌĆÖs Envirostream
subsidiary at its spent-battery recycling facility in Victoria. Spent
batteries are collected from pick-up points at various locations,
including offices and stores. After sorting, they are mechanically
shredded with the cathode and anode active compounds sepa-
rated.
ŌĆśThe battery dust contains high levels of zinc and manganese
and minor amounts of graphite and potassium. The zinc and
manganese are of the most interest as fertiliser micro-nutrients,ŌĆÖ
Lithium Australia says.
Initial results were encouraging enough for the company to
commit to the next stage of the experiment. ŌĆśRecycling all the
metals within spent batteries is something thatŌĆÖs rarely done
effectively, which is why it remains a target for us,ŌĆÖ says manag-
ing director Adrian Griffin.
ŌĆśWe have not limited ourselves to recycling only lithium-ion bat-
teries but, rather, have included alkaline batteries in a bid to
eliminate all such items from landfill,ŌĆÖ Griffin adds, underlining
the importance of recycling critical metals.
ŌĆśWeŌĆÖre cognisant of the environmental implications of burying
such ŌĆ£wasteŌĆØ and encourage all consumers to join us in recy-
cling every spent battery for the benefit of the environment
now, for the sake of the future.ŌĆÖ

restoring the oCeans one bottle at a time
Soft drinks producer Coca Cola plans to build a plastic bottle
recycling facility in Indonesia. It could be a milestone for sustain-
ability in the country as it has a reputation for being one of the
worldŌĆÖs worst plastic polluters.
Coca Cola has signed a deal with plastic packaging company
Dynapack Asia for a feasibility study on developing the facility, the
Jakarta Post reports. The soft drinks manufacturer has also pledged
to cut IndonesiaŌĆÖs consumption of new plastic resin by 25 000
tonnes a year by 2022 by using more recycled plastic. Coca Cola
products are known to be one of the main sources of marine litter.
ŌĆśIt is a significant step toward becoming self-sustaining in the plas-
tic materials we use, ensuring a closed loop for plastic beverage
packaging in Indonesia as a whole,ŌĆÖ says Kadir Gunduz, president
director of Coca Cola Amatil Indonesia.
In support of a circular economy, Dynapack aims to include at least
25% recycled plastic in its production from 2025. Company presi-
dent Tirtadjaja Hambali says the goal is part of its commitment to
the Ellen MacArthur Foundation.
These developments follow various studies detailing the scale of
the plastic pollution problem in Southeast Asia. Indonesia ranks
second in the global list of ocean plastic hotspots. ThatŌĆÖs why the
country has outlined an ambitious objective to cut plastic waste by
70% by 2025 as its contribution to the global National Plastic
Action Partnership.

fraunhofer reCovers up to 98% of valu-
able e-sCrap metals

A consortium of recycling players
has developed a fully automated
method to disassemble electronic
devices and recover a high per-
centage of the precious metals in
components. The innovative solu-
tion focuses on tantalum, neodym-
ium, tungsten, cobalt and gallium.

The process has resulted from the EUŌĆÖs four-year ADIR project which
has been led by GermanyŌĆÖs Fraunhofer Institute for Laser Technology
and involved eight project partners from three countries. Together, they
processed around 1 000 mobile phones and 800 printed circuit boards
from computers.
Project supervisor Dr Cord Fricke-Begemann says the pilot disassembly
plant relies on a combination of laser technology, robotics, vision sys-
tems and information technology. The lasers are able to accurately
identify materials used in each component in a fast, non-contact pro-
cess while they are being cut from boards or de-soldered.
ŌĆśThe patented procedure is an efficient means of recovering strategical-
ly important materials of high economic value on an industrial scale,ŌĆÖ
reports Fricke-Bergmann. ŌĆśWeŌĆÖve seen a great deal of interest from
experts.ŌĆÖ He says Electrocycling was an important project partner as
the first field tests were held at its facility in late 2018.
The recycler used the ADIR demonstrator ŌĆō consisting of seven inter-
linked machines ŌĆō to show how the new processes can recover between
96% and 98% of the tantalum from capacitors. This is significantly high-
er proportion than the tantalum ore concentrates offered by suppliers
of virgin raw material.

lindner: be smart, donŌĆÖt let the
Coronavirus shut your plant
ŌĆśEvery single minute that delays the commissioning of a new facili-
ty comes with a price tag,ŌĆÖ argues Austrian shredder specialist
Lindner. The company had just started retrofitting a clientŌĆÖs alterna-
tive fuel shredder when the coronavirus hit.
The widespread lockdown measures ended physical work on
German recycler H├╝ndgenŌĆÖs recently installed shredder. ŌĆśOur new
Lindner Micromat 2500 shredder was delivered in March, when the
construction of our facility was well under way,ŌĆÖ says Christian
H├╝ndgen, ceo of H├╝ndgen Entsorgungs.
ŌĆśWhen we were told that, due to Covid-19 and the associated travel
restrictions, no Lindner service technicians could start up the
machine on-site we were already expecting delays,ŌĆÖ the business-
man adds. ŌĆśWe were faced with an enormous problem, since mate-
rial has to be processed and weŌĆÖre bound by contract to do so.ŌĆÖ
To overcome this unusual situation, Lindner opted for a smart solu-
tion. The Lindner Service Centre helped with video analysis and
online support to complete the technical work on-site.
ŌĆśOne of the fundamental values at Lindner is to be a reliable and
trustworthy partner. Right now we are doing everything we can to
support our customers with all available means and keep to agree-
ments that have been made,ŌĆÖ comments LindnerŌĆÖs account manager
Manfred E├¤mann.