Subscribe
9 2021 Techtalks Lindner offers Slovenia extra recycling capacity Slovenian recycler Dinos has been running its new recycling plant for industrial plastic waste with great results. Much of the credit is due to Lindner’s state-of-the-...
Read the entire page 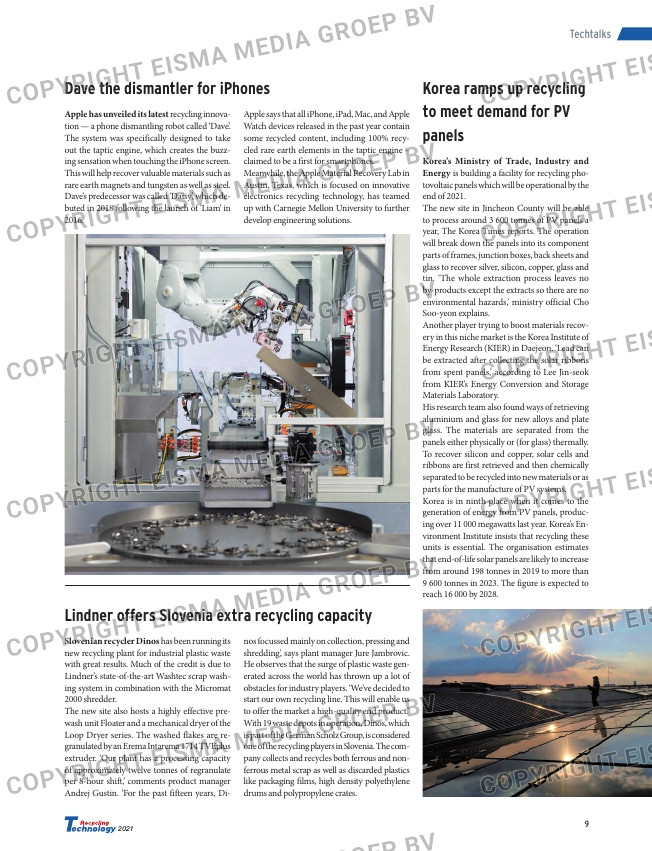 Lindner offers Slovenia extra recycling capacity
Slovenian recycler Dinos has been running its
new recycling plant for industrial plastic waste
with great results. Much of the credit is due to
Lindner’s state-of-the-art Washtec scrap wash-
ing system in combination with the Micromat
2000 shredder.
The new site also hosts a highly effective pre-
wash unit Floater and a mechanical dryer of the
Loop Dryer series. The washed flakes are re-
granulated by an Erema Intarema 1714 TVEplus
extruder. ‘Our plant has a processing capacity
of approximately twelve tonnes of regranulate
per 8-hour shift,’ comments product manager
Andrej Gustin. ‘For the past fifteen years, Di-

nos focussed mainly on collection, pressing and
shredding’, says plant manager Jure Jambrovic.
He observes that the surge of plastic waste gen-
erated across the world has thrown up a lot of
obstacles for industry players. ‘We’ve decided to
start our own recycling line. This will enable us
to offer the market a high-quality end product.’
With 19 waste depots in operation, Dinos, which
is part of the German Scholz Group, is considered
one of the recycling players in Slovenia. The com-
pany collects and recycles both ferrous and non-
ferrous metal scrap as well as discarded plastics
like packaging films, high density polyethylene
drums and polypropylene crates.

Korea ramps up recycling
to meet demand for PV
panels
Korea’s Ministry of Trade, Industry and
Energy is building a facility for recycling pho-
tovoltaic panels which will be operational by the
end of 2021.
The new site in Jincheon County will be able
to process around 3 600 tonnes of PV panels a
year, The Korea Times reports. The operation
will break down the panels into its component
parts of frames, junction boxes, back sheets and
glass to recover silver, silicon, copper, glass and
tin. ‘The whole extraction process leaves no
by-products except the extracts so there are no
environmental hazards,’ ministry official Cho
Soo-yeon explains.
Another player trying to boost materials recov-
ery in this niche market is the Korea Institute of
Energy Research (KIER) in Daejeon. ‘Lead can
be extracted after collecting the solar ribbons
from spent panels,’ according to Lee Jin-seok
from KIER’s Energy Conversion and Storage
Materials Laboratory.
His research team also found ways of retrieving
aluminium and glass for new alloys and plate
glass. The materials are separated from the
panels either physically or (for glass) thermally.
To recover silicon and copper, solar cells and
ribbons are first retrieved and then chemically
separated to be recycled into new materials or as
parts for the manufacture of PV systems.
Korea is in ninth place when it comes to the
generation of energy from PV panels, produc-
ing over 11 000 megawatts last year. Korea’s En-
vironment Institute insists that recycling these
units is essential. The organisation estimates
that end-of-life solar panels are likely to increase
from around 198 tonnes in 2019 to more than
9 600 tonnes in 2023. The figure is expected to
reach 16 000 by 2028.

Dave the dismantler for iPhones
Apple has unveiled its latest recycling innova-
tion — a phone dismantling robot called ‘Dave’.
The system was specifically designed to take
out the taptic engine, which creates the buzz-
ing sensation when touching the iPhone screen.
This will help recover valuable materials such as
rare earth magnets and tungsten as well as steel.
Dave’s predecessor was called ‘Daisy’, which de-
buted in 2018 following the launch of ‘Liam’ in
2016.

Apple says that all iPhone, iPad, Mac, and Apple
Watch devices released in the past year contain
some recycled content, including 100% recy-
cled rare earth elements in the taptic engine –
claimed to be a first for smartphones.
Meanwhile, the Apple Material Recovery Lab in
Austin, Texas, which is focused on innovative
electronics recycling technology, has teamed
up with Carnegie Mellon University to further
develop engineering solutions.