Subscribe
52 2021 Techtalks Sorting technology expert’s know-how backs landfill project An EU-backed project to investigate the recovery of materials from landfill sites is be- ing hailed as a ‘missing link’ for the Circular Economy. Europe...
Read the entire page 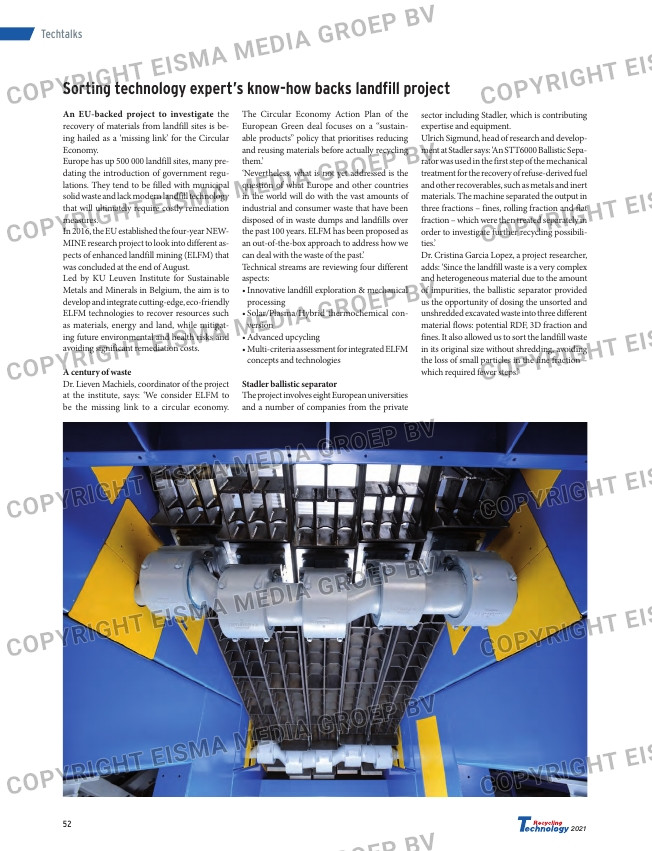 Sorting technology expert’s know-how backs landfill project
An EU-backed project to investigate the
recovery of materials from landfill sites is be-
ing hailed as a ‘missing link’ for the Circular
Economy.
Europe has up 500 000 landfill sites, many pre-
dating the introduction of government regu-
lations. They tend to be filled with municipal
solid waste and lack modern landfill technology
that will ultimately require costly remediation
measures.
In 2016, the EU established the four-year NEW-
MINE research project to look into different as-
pects of enhanced landfill mining (ELFM) that
was concluded at the end of August.
Led by KU Leuven Institute for Sustainable
Metals and Minerals in Belgium, the aim is to
develop and integrate cutting-edge, eco-friendly
ELFM technologies to recover resources such
as materials, energy and land, while mitigat-
ing future environmental and health risks and
avoiding significant remediation costs.

A century of waste
Dr. Lieven Machiels, coordinator of the project
at the institute, says: ‘We consider ELFM to
be the missing link to a circular economy.

The Circular Economy Action Plan of the
European Green deal focuses on a “sustain-
able products” policy that prioritises reducing
and reusing materials before actually recycling
them.’
‘Nevertheless, what is not yet addressed is the
question of what Europe and other countries
in the world will do with the vast amounts of
industrial and consumer waste that have been
disposed of in waste dumps and landfills over
the past 100 years. ELFM has been proposed as
an out-of-the-box approach to address how we
can deal with the waste of the past.’
Technical streams are reviewing four different
aspects:
• Innovative landfill exploration & mechanical

sector including Stadler, which is contributing
expertise and equipment.
Ulrich Sigmund, head of research and develop-
ment at Stadler says: ‘An STT6000 Ballistic Sepa-
rator was used in the first step of the mechanical
treatment for the recovery of refuse-derived fuel
and other recoverables, such as metals and inert
materials. The machine separated the output in
three fractions – fines, rolling fraction and flat
fraction – which were then treated separately in
order to investigate further recycling possibili-
ties.’
Dr. Cristina Garcia Lopez, a project researcher,
adds: ‘Since the landfill waste is a very complex
and heterogeneous material due to the amount
of impurities, the ballistic separator provided
us the opportunity of dosing the unsorted and
unshredded excavated waste into three different
material flows: potential RDF, 3D fraction and
fines. It also allowed us to sort the landfill waste
in its original size without shredding, avoiding
the loss of small particles in the fine fraction –
which required fewer steps.’