Subscribe
49 2021 Techtalks Mother Nature tackles plastic waste Researchers at the Fraunhofer Institute in Germany suggest caterpillars could play a role in cutting unwanted plastics. Their work is based on the knowledge that some animals have ...
Read the entire page 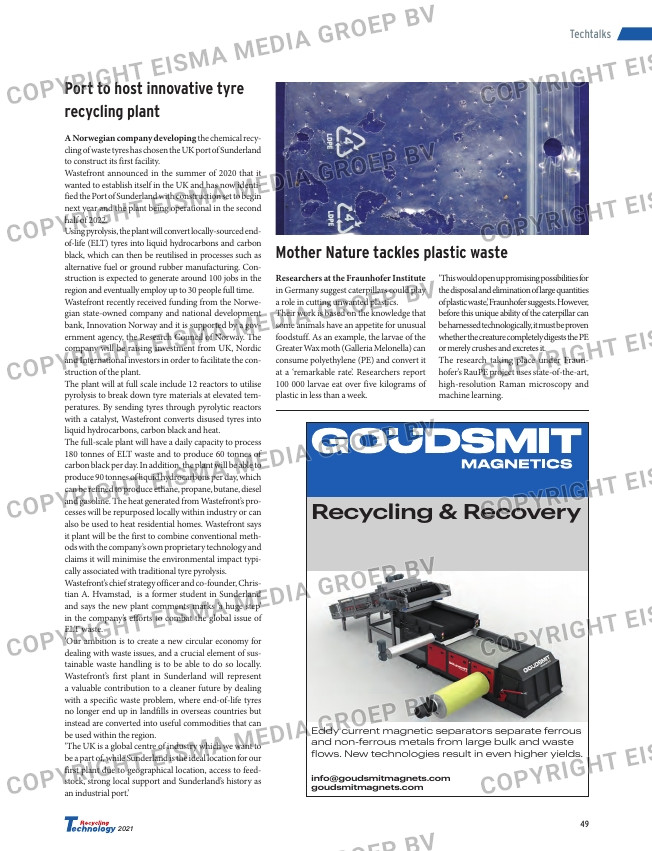 Mother Nature tackles plastic waste
Researchers at the Fraunhofer Institute
in Germany suggest caterpillars could play
a role in cutting unwanted plastics.
Their work is based on the knowledge that
some animals have an appetite for unusual
foodstuff. As an example, the larvae of the
Greater Wax moth (Galleria Melonella) can
consume polyethylene (PE) and convert it
at a ‘remarkable rate’. Researchers report
100 000 larvae eat over five kilograms of
plastic in less than a week.

‘This would open up promising possibilities for
the disposal and elimination of large quantities
of plastic waste,’ Fraunhofer suggests. However,
before this unique ability of the caterpillar can
be harnessed technologically, it must be proven
whether the creature completely digests the PE
or merely crushes and excretes it.
The research taking place under Fraun-
hofer’s RauPE project uses state-of-the-art,
high-resolution Raman microscopy and
machine learning.

Port to host innovative tyre
recycling plant
A Norwegian company developing the chemical recy-
cling of waste tyres has chosen the UK port of Sunderland
to construct its first facility.
Wastefront announced in the summer of 2020 that it
wanted to establish itself in the UK and has now identi-
fied the Port of Sunderland with construction set to begin
next year and the plant being operational in the second
half of 2022.
Using pyrolysis, the plant will convert locally-sourced end-
of-life (ELT) tyres into liquid hydrocarbons and carbon
black, which can then be reutilised in processes such as
alternative fuel or ground rubber manufacturing. Con-
struction is expected to generate around 100 jobs in the
region and eventually employ up to 30 people full time.
Wastefront recently received funding from the Norwe-
gian state-owned company and national development
bank, Innovation Norway and it is supported by a gov-
ernment agency, the Research Council of Norway. The
company will be raising investment from UK, Nordic
and International investors in order to facilitate the con-
struction of the plant.
The plant will at full scale include 12 reactors to utilise
pyrolysis to break down tyre materials at elevated tem-
peratures. By sending tyres through pyrolytic reactors
with a catalyst, Wastefront converts disused tyres into
liquid hydrocarbons, carbon black and heat.
The full-scale plant will have a daily capacity to process
180 tonnes of ELT waste and to produce 60 tonnes of
carbon black per day. In addition, the plant will be able to
produce 90 tonnes of liquid hydrocarbons per day, which
can be refined to produce ethane, propane, butane, diesel
and gasoline. The heat generated from Wastefront’s pro-
cesses will be repurposed locally within industry or can
also be used to heat residential homes. Wastefront says
it plant will be the first to combine conventional meth-
ods with the company’s own proprietary technology and
claims it will minimise the environmental impact typi-
cally associated with traditional tyre pyrolysis.
Wastefront’s chief strategy officer and co-founder, Chris-
tian A. Hvamstad, is a former student in Sunderland
and says the new plant comments marks ‘a huge step’
in the company’s efforts to combat the global issue of
ELT waste.
‘Our ambition is to create a new circular economy for
dealing with waste issues, and a crucial element of sus-
tainable waste handling is to be able to do so locally.
Wastefront’s first plant in Sunderland will represent
a valuable contribution to a cleaner future by dealing
with a specific waste problem, where end-of-life tyres
no longer end up in landfills in overseas countries but
instead are converted into useful commodities that can
be used within the region.
‘The UK is a global centre of industry which we want to
be a part of, while Sunderland is the ideal location for our
first plant due to geographical location, access to feed-
stock, strong local support and Sunderland’s history as
an industrial port.’