Subscribe
T he global cooking oil market is set for ‘rapid growth’, say market analysts who are expecting its value to reach Euro 120 billion by 2024. This is not surprising as India alone uses over 25 million litres of cooking oil per year...
Read the entire page 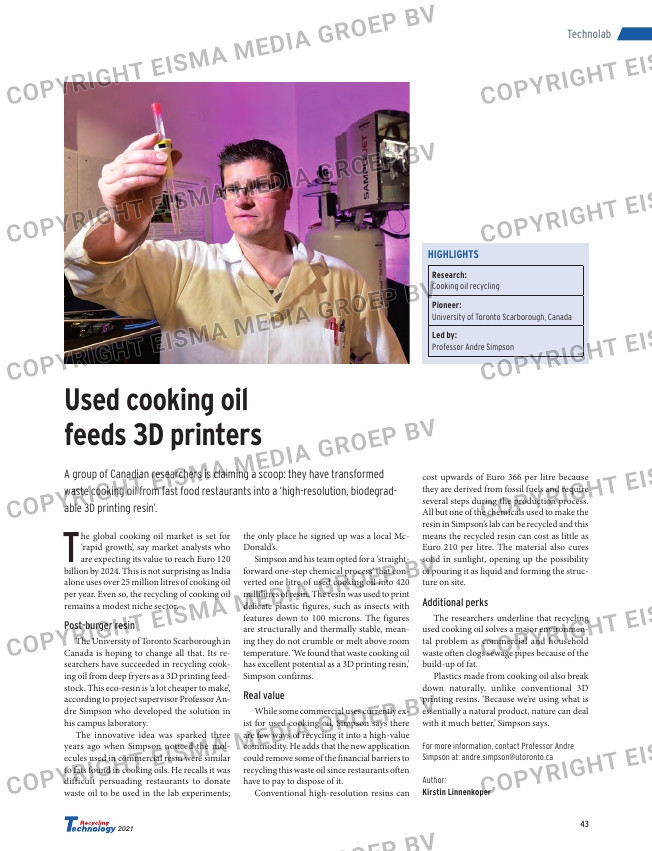 T
he global cooking oil market is set for
‘rapid growth’, say market analysts who
are expecting its value to reach Euro 120

billion by 2024. This is not surprising as India
alone uses over 25 million litres of cooking oil
per year. Even so, the recycling of cooking oil
remains a modest niche sector.

Post-burger resin
The University of Toronto Scarborough in

Canada is hoping to change all that. Its re-
searchers have succeeded in recycling cook-
ing oil from deep fryers as a 3D printing feed-
stock. This eco-resin is ‘a lot cheaper to make’,
according to project supervisor Professor An-
dre Simpson who developed the solution in
his campus laboratory.

The innovative idea was sparked three
years ago when Simpson noticed the mol-
ecules used in commercial resin were similar
to fats found in cooking oils. He recalls it was
difficult persuading restaurants to donate
waste oil to be used in the lab experiments;

the only place he signed up was a local Mc-
Donald’s.

Simpson and his team opted for a ‘straight-
forward one-step chemical process’ that con-
verted one litre of used cooking oil into 420
millilitres of resin. The resin was used to print
delicate plastic figures, such as insects with
features down to 100 microns. The figures
are structurally and thermally stable, mean-
ing they do not crumble or melt above room
temperature. ‘We found that waste cooking oil
has excellent potential as a 3D printing resin,’
Simpson confirms.

ist for used cooking oil, Simpson says there
are few ways of recycling it into a high-value
commodity. He adds that the new application
could remove some of the financial barriers to
recycling this waste oil since restaurants often
have to pay to dispose of it.

cost upwards of Euro 366 per litre because
they are derived from fossil fuels and require
several steps during the production process.
All but one of the chemicals used to make the
resin in Simpson’s lab can be recycled and this
means the recycled resin can cost as little as
Euro 210 per litre. The material also cures
solid in sunlight, opening up the possibility
of pouring it as liquid and forming the struc-
ture on site.

Plastics made from cooking oil also break
down naturally, unlike conventional 3D
printing resins. ‘Because we’re using what is
essentially a natural product, nature can deal
with it much better,’ Simpson says.