Subscribe
42 2021 Technolab R efined lead is a critical component of low-cost and stable lead-acid batteries, which can contain up to 14kg of the metal. Considering their life-cycle is two to five years, large volumes of spent batteries are g...
Read the entire page 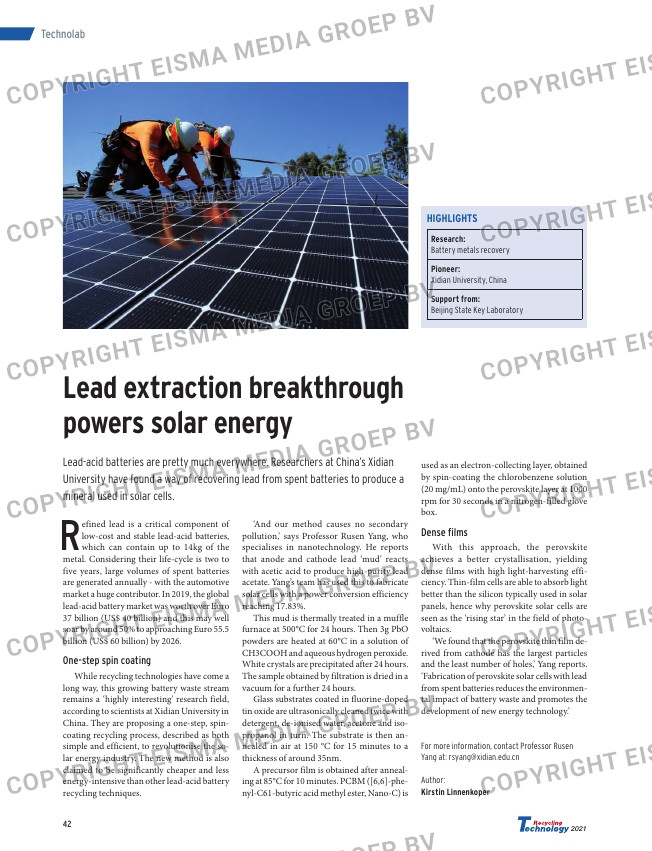 R
efined lead is a critical component of
low-cost and stable lead-acid batteries,
which can contain up to 14kg of the

metal. Considering their life-cycle is two to
five years, large volumes of spent batteries
are generated annually – with the automotive
market a huge contributor. In 2019, the global
lead-acid battery market was worth over Euro
37 billion (US$ 40 billion) and this may well
soar by around 50% to approaching Euro 55.5
billion (US$ 60 billion) by 2026.

One-step spin coating
While recycling technologies have come a

long way, this growing battery waste stream
remains a ‘highly interesting’ research field,
according to scientists at Xidian University in
China. They are proposing a one-step, spin-
coating recycling process, described as both
simple and efficient, to revolutionise the so-
lar energy industry. The new method is also
claimed to be significantly cheaper and less
energy-intensive than other lead-acid battery
recycling techniques.

‘And our method causes no secondary
pollution,’ says Professor Rusen Yang, who
specialises in nanotechnology. He reports
that anode and cathode lead ‘mud’ reacts
with acetic acid to produce high-purity lead
acetate. Yang’s team has used this to fabricate
solar cells with a power conversion efficiency
reaching 17.83%.

This mud is thermally treated in a muffle
furnace at 500°C for 24 hours. Then 3g PbO
powders are heated at 60°C in a solution of
CH3COOH and aqueous hydrogen peroxide.
White crystals are precipitated after 24 hours.
The sample obtained by filtration is dried in a
vacuum for a further 24 hours.

Glass substrates coated in fluorine-doped
tin oxide are ultrasonically cleaned twice with
detergent, de-ionised water, acetone and iso-
propanol in turn. The substrate is then an-
nealed in air at 150 °C for 15 minutes to a
thickness of around 35nm.

used as an electron-collecting layer, obtained
by spin-coating the chlorobenzene solution
(20 mg/mL) onto the perovskite layer at 1000
rpm for 30 seconds in a nitrogen-filled glove
box.

Dense films
With this approach, the perovskite

achieves a better crystallisation, yielding
dense films with high light-harvesting effi-
ciency. Thin-film cells are able to absorb light
better than the silicon typically used in solar
panels, hence why perovskite solar cells are
seen as the ‘rising star’ in the field of photo-
voltaics.

‘We found that the perovskite thin film de-
rived from cathode has the largest particles
and the least number of holes,’ Yang reports.
‘Fabrication of perovskite solar cells with lead
from spent batteries reduces the environmen-
tal impact of battery waste and promotes the
development of new energy technology.’