Subscribe
34 2021 Technolab B attery recycling in Europe has come far, with promising results for extracting valuable metals such as copper, nickel and zinc - but not all elements. ‘For the mo- ment, unfortunately, lithium is lost,’ laments...
Read the entire page 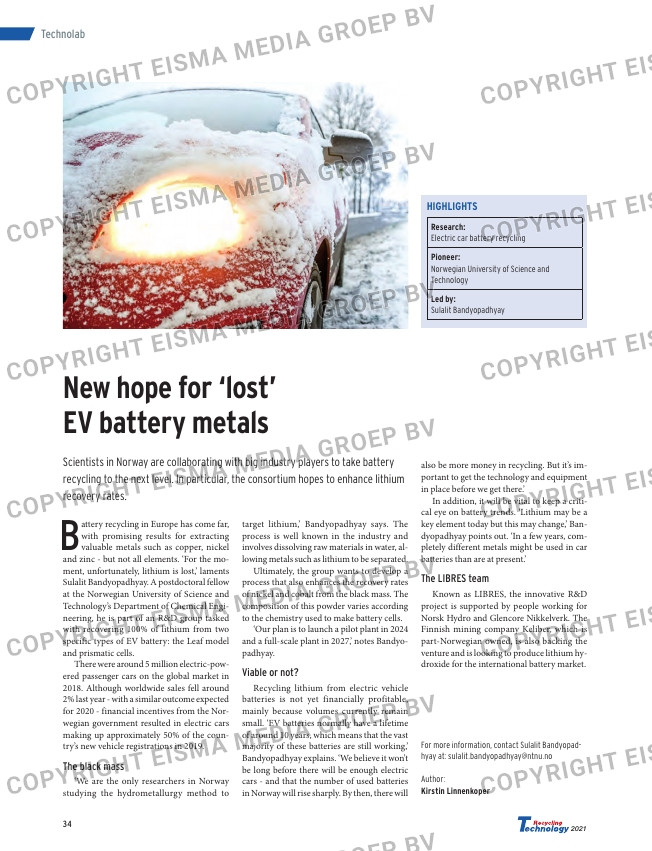 B
attery recycling in Europe has come far,
with promising results for extracting
valuable metals such as copper, nickel

and zinc – but not all elements. ‘For the mo-
ment, unfortunately, lithium is lost,’ laments
Sulalit Bandyopadhyay. A postdoctoral fellow
at the Norwegian University of Science and
Technology’s Department of Chemical Engi-
neering, he is part of an R&D group tasked
with recovering 100% of lithium from two
specific types of EV battery: the Leaf model
and prismatic cells.

There were around 5 million electric-pow-
ered passenger cars on the global market in
2018. Although worldwide sales fell around
2% last year – with a similar outcome expected
for 2020 – financial incentives from the Nor-
wegian government resulted in electric cars
making up approximately 50% of the coun-
try’s new vehicle registrations in 2019.

The black mass
‘We are the only researchers in Norway

studying the hydrometallurgy method to

target lithium,’ Bandyopadhyay says. The
process is well known in the industry and
involves dissolving raw materials in water, al-
lowing metals such as lithium to be separated.

Ultimately, the group wants to develop a
process that also enhances the recovery rates
of nickel and cobalt from the black mass. The
composition of this powder varies according
to the chemistry used to make battery cells.

Viable or not?
Recycling lithium from electric vehicle

batteries is not yet financially profitable,
mainly because volumes currently remain
small. ‘EV batteries normally have a lifetime
of around 10 years, which means that the vast
majority of these batteries are still working,’
Bandyopadhyay explains. ‘We believe it won’t
be long before there will be enough electric
cars – and that the number of used batteries
in Norway will rise sharply. By then, there will

also be more money in recycling. But it’s im-
portant to get the technology and equipment
in place before we get there.’

In addition, it will be vital to keep a criti-
cal eye on battery trends. ‘Lithium may be a
key element today but this may change,’ Ban-
dyopadhyay points out. ‘In a few years, com-
pletely different metals might be used in car
batteries than are at present.’

The LIBRES team
Known as LIBRES, the innovative R&D

project is supported by people working for
Norsk Hydro and Glencore Nikkelverk. The
Finnish mining company Keliber, which is
part-Norwegian owned, is also backing the
venture and is looking to produce lithium hy-
droxide for the international battery market.

New hope for ‘lost’
EV battery metals
Scientists in Norway are collaborating with big industry players to take battery
recycling to the next level. In particular, the consortium hopes to enhance lithium
recovery rates.