Subscribe
32 2021 On the horizon ‘Preconditions for big change are created right now’ When it comes to circularity, who are the actors that will create real change in the coming decade? What impact will they achieve? The following forecast co...
Read the entire page 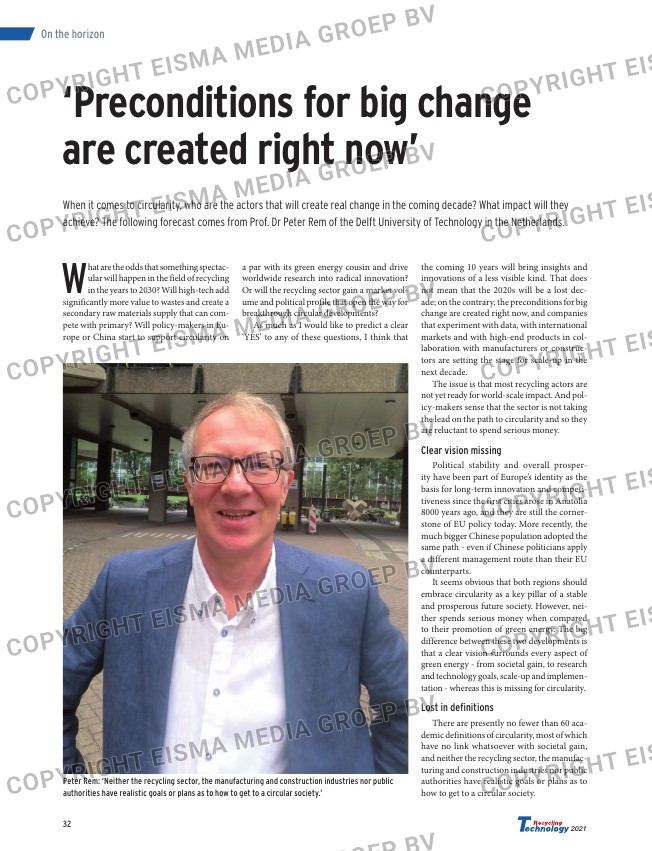 ‘Preconditions for big change
are created right now’
When it comes to circularity, who are the actors that will create real change in the coming decade? What impact will they
achieve? The following forecast comes from Prof. Dr Peter Rem of the Delft University of Technology in the Netherlands.

Peter Rem: ‘Neither the recycling sector, the manufacturing and construction industries nor public
authorities have realistic goals or plans as to how to get to a circular society.’

W
hat are the odds that something spectac-
ular will happen in the field of recycling
in the years to 2030? Will high-tech add

significantly more value to wastes and create a
secondary raw materials supply that can com-
pete with primary? Will policy-makers in Eu-
rope or China start to support circularity on

a par with its green energy cousin and drive
worldwide research into radical innovation?
Or will the recycling sector gain a market vol-
ume and political profile that open the way for
breakthrough circular developments?

As much as I would like to predict a clear
‘YES’ to any of these questions, I think that

the coming 10 years will bring insights and
innovations of a less visible kind. That does
not mean that the 2020s will be a lost dec-
ade; on the contrary, the preconditions for big
change are created right now, and companies
that experiment with data, with international
markets and with high-end products in col-
laboration with manufacturers or construc-
tors are setting the stage for scale-up in the
next decade.

The issue is that most recycling actors are
not yet ready for world-scale impact. And pol-
icy-makers sense that the sector is not taking
the lead on the path to circularity and so they
are reluctant to spend serious money.

ity have been part of Europe’s identity as the
basis for long-term innovation and competi-
tiveness since the first cities arose in Anatolia
8000 years ago, and they are still the corner-
stone of EU policy today. More recently, the
much bigger Chinese population adopted the
same path – even if Chinese politicians apply
a different management route than their EU
counterparts.

It seems obvious that both regions should
embrace circularity as a key pillar of a stable
and prosperous future society. However, nei-
ther spends serious money when compared
to their promotion of green energy. The big
difference between these two developments is
that a clear vision surrounds every aspect of
green energy – from societal gain, to research
and technology goals, scale-up and implemen-
tation – whereas this is missing for circularity.

There are presently no fewer than 60 aca-
demic definitions of circularity, most of which
have no link whatsoever with societal gain,
and neither the recycling sector, the manufac-
turing and construction industries nor public
authorities have realistic goals or plans as to
how to get to a circular society.