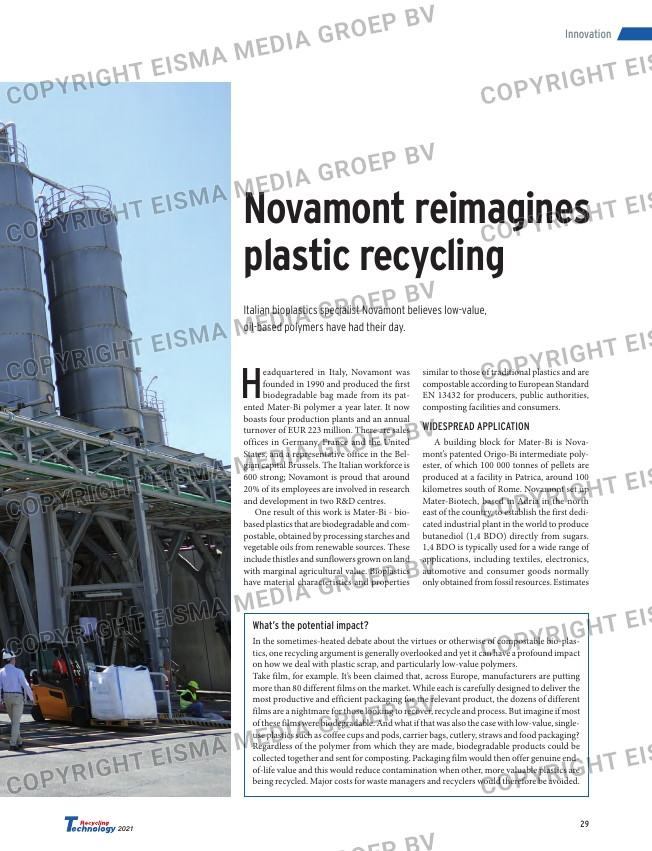 H
eadquartered in Italy, Novamont was
founded in 1990 and produced the first
biodegradable bag made from its pat-

ented Mater-Bi polymer a year later. It now
boasts four production plants and an annual
turnover of EUR 223 million. There are sales
offices in Germany, France and the United
States, and a representative office in the Bel-
gian capital Brussels. The Italian workforce is
600 strong; Novamont is proud that around
20% of its employees are involved in research
and development in two R&D centres.

One result of this work is Mater-Bi – bio-
based plastics that are biodegradable and com-
postable, obtained by processing starches and
vegetable oils from renewable sources. These
include thistles and sunflowers grown on land
with marginal agricultural value. Bioplastics
have material characteristics and properties

similar to those of traditional plastics and are
compostable according to European Standard
EN 13432 for producers, public authorities,
composting facilities and consumers.

WIDESPREAD APPLICATION
A building block for Mater-Bi is Nova-

mont’s patented Origo-Bi intermediate poly-
ester, of which 100 000 tonnes of pellets are
produced at a facility in Patrica, around 100
kilometres south of Rome. Novamont set up
Mater-Biotech, based in Adria in the north
east of the country, to establish the first dedi-
cated industrial plant in the world to produce
butanediol (1,4 BDO) directly from sugars.
1,4 BDO is typically used for a wide range of
applications, including textiles, electronics,
automotive and consumer goods normally
only obtained from fossil resources. Estimates

What’s the potential impact?
In the sometimes-heated debate about the virtues or otherwise of compostable bio-plas-
tics, one recycling argument is generally overlooked and yet it can have a profound impact
on how we deal with plastic scrap, and particularly low-value polymers.
Take film, for example. It’s been claimed that, across Europe, manufacturers are putting
more than 80 different films on the market. While each is carefully designed to deliver the
most productive and efficient packaging for the relevant product, the dozens of different
films are a nightmare for those looking to recover, recycle and process. But imagine if most
of these films were biodegradable. And what if that was also the case with low-value, single-
use plastics such as coffee cups and pods, carrier bags, cutlery, straws and food packaging?
Regardless of the polymer from which they are made, biodegradable products could be
collected together and sent for composting. Packaging film would then offer genuine end-
of-life value and this would reduce contamination when other, more valuable plastics are
being recycled. Major costs for waste managers and recyclers would therefore be avoided.