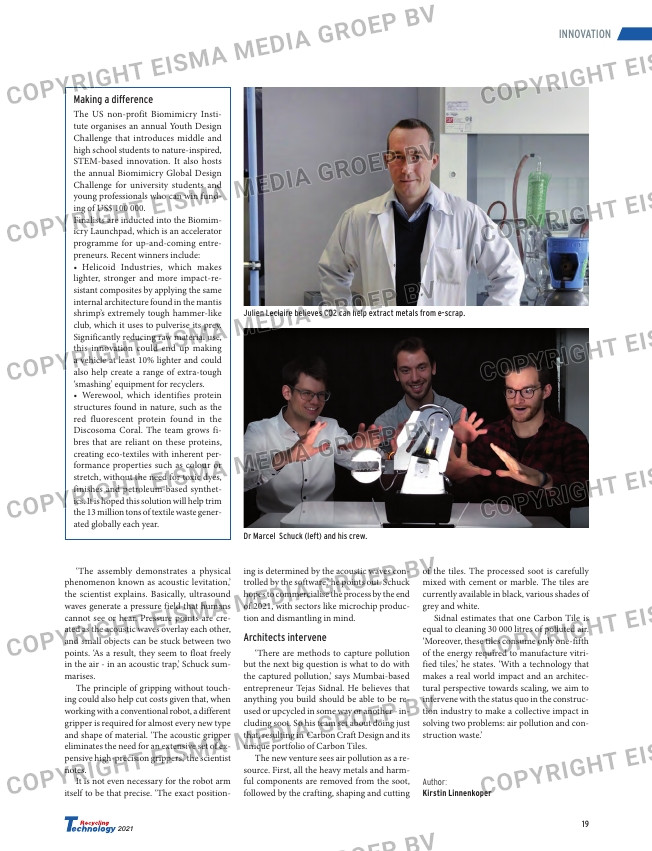 ‘The assembly demonstrates a physical
phenomenon known as acoustic levitation,’
the scientist explains. Basically, ultrasound
waves generate a pressure field that humans
cannot see or hear. Pressure points are cre-
ated as the acoustic waves overlay each other,
and small objects can be stuck between two
points. ‘As a result, they seem to float freely
in the air – in an acoustic trap,’ Schuck sum-
marises.

The principle of gripping without touch-
ing could also help cut costs given that, when
working with a conventional robot, a different
gripper is required for almost every new type
and shape of material. ‘The acoustic gripper
eliminates the need for an extensive set of ex-
pensive high-precision grippers,’ the scientist
notes.

It is not even necessary for the robot arm
itself to be that precise. ‘The exact position-

ing is determined by the acoustic waves con-
trolled by the software,’ he points out. Schuck
hopes to commercialise the process by the end
of 2021, with sectors like microchip produc-
tion and dismantling in mind.

Architects intervene
‘There are methods to capture pollution

but the next big question is what to do with
the captured pollution,’ says Mumbai-based
entrepreneur Tejas Sidnal. He believes that
anything you build should be able to be re-
used or upcycled in some way or another – in-
cluding soot. So his team set about doing just
that, resulting in Carbon Craft Design and its
unique portfolio of Carbon Tiles.

The new venture sees air pollution as a re-
source. First, all the heavy metals and harm-
ful components are removed from the soot,
followed by the crafting, shaping and cutting

of the tiles. The processed soot is carefully
mixed with cement or marble. The tiles are
currently available in black, various shades of
grey and white.

Sidnal estimates that one Carbon Tile is
equal to cleaning 30 000 litres of polluted air.
‘Moreover, these tiles consume only one-fifth
of the energy required to manufacture vitri-
fied tiles,’ he states. ‘With a technology that
makes a real world impact and an architec-
tural perspective towards scaling, we aim to
intervene with the status quo in the construc-
tion industry to make a collective impact in
solving two problems: air pollution and con-
struction waste.’

Making a difference
The US non-profit Biomimicry Insti-
tute organises an annual Youth Design
Challenge that introduces middle and
high school students to nature-inspired,
STEM-based innovation. It also hosts
the annual Biomimicry Global Design
Challenge for university students and
young professionals who can win fund-
ing of US$ 100 000.
Finalists are inducted into the Biomim-
icry Launchpad, which is an accelerator
programme for up-and-coming entre-
preneurs. Recent winners include:
• Helicoid Industries, which makes
lighter, stronger and more impact-re-
sistant composites by applying the same
internal architecture found in the mantis
shrimp’s extremely tough hammer-like
club, which it uses to pulverise its prey.
Significantly reducing raw material use,
this innovation could end up making
a vehicle at least 10% lighter and could
also help create a range of extra-tough
‘smashing’ equipment for recyclers.
• Werewool, which identifies protein
structures found in nature, such as the
red fluorescent protein found in the
Discosoma Coral. The team grows fi-
bres that are reliant on these proteins,
creating eco-textiles with inherent per-
formance properties such as colour or
stretch, without the need for toxic dyes,
finishes and petroleum-based synthet-
ics. It is hoped this solution will help trim
the 13 million tons of textile waste gener-
ated globally each year.