Subscribe
13 2021 What can the clean-up project really accomplish? A group of scientists has concluded that devices installed on the ocean surface to collect plastic waste can only play a ‘very modest’ part in solving the pollution problem. H...
Read the entire page 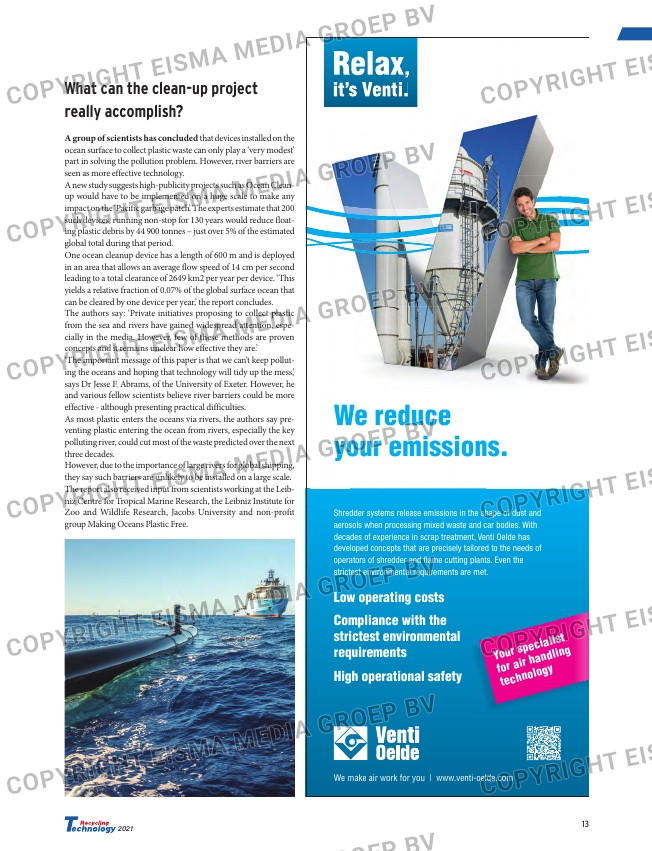 What can the clean-up project
really accomplish?
A group of scientists has concluded that devices installed on the
ocean surface to collect plastic waste can only play a ‘very modest’
part in solving the pollution problem. However, river barriers are
seen as more effective technology.
A new study suggests high-publicity projects such as Ocean Clean-
up would have to be implemented on a huge scale to make any
impact on the ‘Pacific garbage patch’. The experts estimate that 200
such devices, running non-stop for 130 years would reduce float-
ing plastic debris by 44 900 tonnes – just over 5% of the estimated
global total during that period.
One ocean cleanup device has a length of 600 m and is deployed
in an area that allows an average flow speed of 14 cm per second
leading to a total clearance of 2649 km2 per year per device. ‘This
yields a relative fraction of 0.07% of the global surface ocean that
can be cleared by one device per year,’ the report concludes.
The authors say: ‘Private initiatives proposing to collect plastic
from the sea and rivers have gained widespread attention, espe-
cially in the media. However, few of these methods are proven
concepts and it remains unclear how effective they are.’
‘The important message of this paper is that we can’t keep pollut-
ing the oceans and hoping that technology will tidy up the mess,’
says Dr Jesse F. Abrams, of the University of Exeter. However, he
and various fellow scientists believe river barriers could be more
effective – although presenting practical difficulties.
As most plastic enters the oceans via rivers, the authors say pre-
venting plastic entering the ocean from rivers, especially the key
polluting river, could cut most of the waste predicted over the next
three decades.
However, due to the importance of large rivers for global shipping,
they say such barriers are unlikely to be installed on a large scale.
The report also received input from scientists working at the Leib-
niz Centre for Tropical Marine Research, the Leibniz Institute for
Zoo and Wildlife Research, Jacobs University and non-profit
group Making Oceans Plastic Free.

Shredder systems release emissions in the shape of dust and
aerosols when processing mixed waste and car bodies. With
decades of experience in scrap treatment, Venti Oelde has
developed concepts that are precisely tailored to the needs of
operators of shredder and fl ame cutting plants. Even the
strictest environmental requirements are met.

Compliance with the
strictest environmental
requirements

We make air work for you | www.venti-oelde.com

We reduce
your emissions.