Subscribe
12 2021 Techtalks SciAps helping to put a woman on the Moon Handheld analysers commonly used to identify scrap alloys are playing a part in the ex ploration of space. NASA astronauts are cur- rently using the SciAps Z-300 in unique land...
Read the entire page 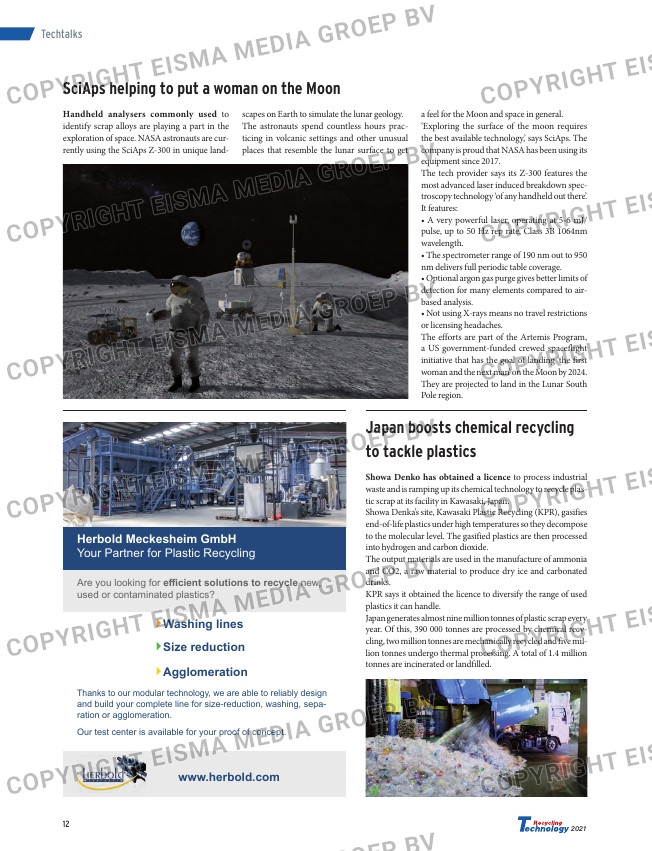 SciAps helping to put a woman on the Moon
Handheld analysers commonly used to
identify scrap alloys are playing a part in the
ex ploration of space. NASA astronauts are cur-
rently using the SciAps Z-300 in unique land-

scapes on Earth to simulate the lunar geology.
The astronauts spend countless hours prac-
ticing in volcanic settings and other unusual
places that resemble the lunar surface to get

a feel for the Moon and space in general.
‘Exploring the surface of the moon requires
the best available technology,’ says SciAps. The
company is proud that NASA has been using its
equipment since 2017.
The tech provider says its Z-300 features the
most advanced laser induced breakdown spec-
troscopy technology ‘of any handheld out there’.
It features:
• A very powerful laser, operating at 5-6 mJ/
pulse, up to 50 Hz rep rate, Class 3B 1064nm
wavelength.
• The spectrometer range of 190 nm out to 950
nm delivers full periodic table coverage.
• Optional argon gas purge gives better limits of
detection for many elements compared to air-
based analysis.
• Not using X-rays means no travel restrictions
or licensing headaches.
The efforts are part of the Artemis Program,
a US government-funded crewed spaceflight
initiative that has the goal of landing ‘the first
woman and the next man’ on the Moon by 2024.
They are projected to land in the Lunar South
Pole region.

Japan boosts chemical recycling
to tackle plastics
Showa Denko has obtained a licence to process industrial
waste and is ramping up its chemical technology to recycle plas-
tic scrap at its facility in Kawasaki, Japan.
Showa Denka’s site, Kawasaki Plastic Recycling (KPR), gasifies
end-of-life plastics under high temperatures so they decompose
to the molecular level. The gasified plastics are then processed
into hydrogen and carbon dioxide.
The output materials are used in the manufacture of ammonia
and CO2, a raw material to produce dry ice and carbonated
drinks.
KPR says it obtained the licence to diversify the range of used
plastics it can handle.
Japan generates almost nine million tonnes of plastic scrap every
year. Of this, 390 000 tonnes are processed by chemical recy-
cling, two million tonnes are mechanically recycled and five mil-
lion tonnes undergo thermal processing. A total of 1.4 million
tonnes are incinerated or landfilled.

Are you looking for efficient solutions to recycle new,
used or contaminated plastics?

Thanks to our modular technology, we are able to reliably design
and build your complete line for size-reduction, washing, sepa-
ration or agglomeration.

Our test center is available for your proof of concept.