Subscribe
11 2021 Techtalks German state grant to boost battery production… and recycling The German government is to invest more than EUR 1.5 billion in battery cell research and production, starting with a EUR 300 million grant to battery ma...
Read the entire page 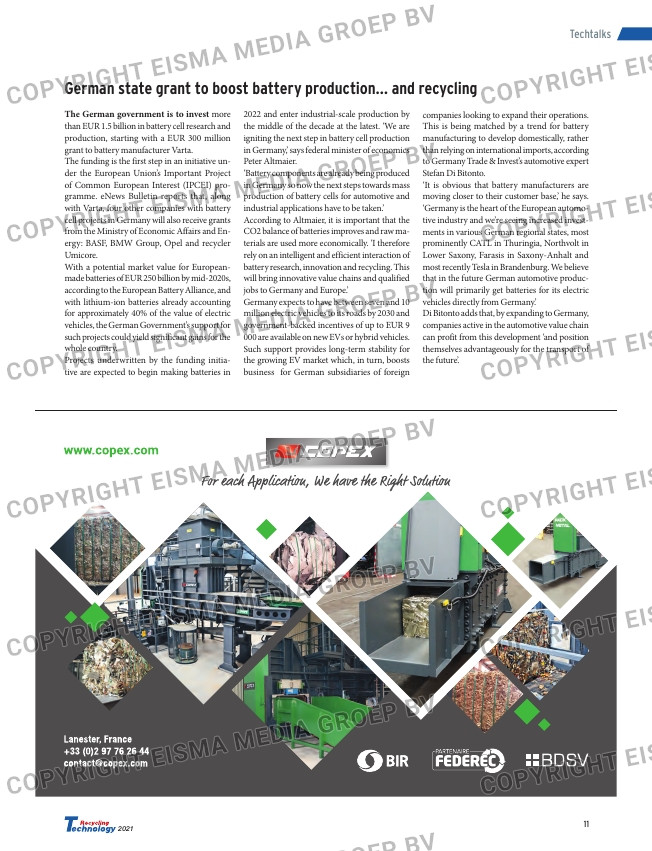 German state grant to boost battery production… and recycling
The German government is to invest more
than EUR 1.5 billion in battery cell research and
production, starting with a EUR 300 million
grant to battery manufacturer Varta.
The funding is the first step in an initiative un-
der the European Union’s Important Project
of Common European Interest (IPCEI) pro-
gramme. eNews Bulletin reports that, along
with Varta, four other companies with battery
cell projects in Germany will also receive grants
from the Ministry of Economic Affairs and En-
ergy: BASF, BMW Group, Opel and recycler
Umicore.
With a potential market value for European-
made batteries of EUR 250 billion by mid-2020s,
according to the European Battery Alliance, and
with lithium-ion batteries already accounting
for approximately 40% of the value of electric
vehicles, the German Government’s support for
such projects could yield significant gains for the
whole country.
Projects underwritten by the funding initia-
tive are expected to begin making batteries in

2022 and enter industrial-scale production by
the middle of the decade at the latest. ‘We are
igniting the next step in battery cell production
in Germany,’ says federal minister of economics
Peter Altmaier.
‘Battery components are already being produced
in Germany so now the next steps towards mass
production of battery cells for automotive and
industrial applications have to be taken.’
According to Altmaier, it is important that the
CO2 balance of batteries improves and raw ma-
terials are used more economically. ‘I therefore
rely on an intelligent and efficient interaction of
battery research, innovation and recycling. This
will bring innovative value chains and qualified
jobs to Germany and Europe.’
Germany expects to have between seven and 10
million electric vehicles to its roads by 2030 and
government-backed incentives of up to EUR 9
000 are available on new EVs or hybrid vehicles.
Such support provides long-term stability for
the growing EV market which, in turn, boosts
business for German subsidiaries of foreign

companies looking to expand their operations.
This is being matched by a trend for battery
manufacturing to develop domestically, rather
than relying on international imports, according
to Germany Trade & Invest’s automotive expert
Stefan Di Bitonto.
‘It is obvious that battery manufacturers are
moving closer to their customer base,’ he says.
‘Germany is the heart of the European automo-
tive industry and we’re seeing increased invest-
ments in various German regional states, most
prominently CATL in Thuringia, Northvolt in
Lower Saxony, Farasis in Saxony-Anhalt and
most recently Tesla in Brandenburg. We believe
that in the future German automotive produc-
tion will primarily get batteries for its electric
vehicles directly from Germany.’
Di Bitonto adds that, by expanding to Germany,
companies active in the automotive value chain
can profit from this development ‘and position
themselves advantageously for the transport of
the future’.